On 16 December 2016 there was a horrific accident between Zastron and Sterkspruit, nine people were killed and another seven sustained injuries ranging from minor to critical after a bakkie and minibus taxi collided head- on.   Five persons were burnt beyond recognition in the fire following the crash.   Patients were treated on scene by emergency workers before they were transported to various hospitals in the area.    The fire was put out with the assistance of local farmers with fire fighting equipment.

Services from as far as Bloemfontein responded to the accident.  2016 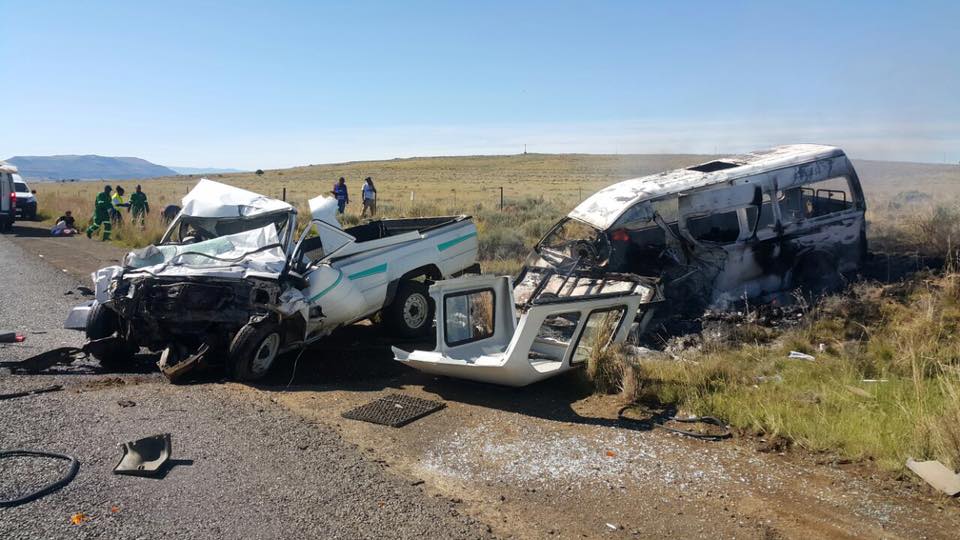 Information and only a few accidents …

Arrive Alive shared insights to the threats to road safety “and the urgent need for cooperation with the taxi industry to provide greater safety for the South African road users.”

According to statistics released by the Gauteng provincial government, out of the 56 fatal accidents involving taxis this year, 84 people have died.

Nineteen school children, aged between five and seven, were injured when a minibus taxi that was transporting them to school overturned in Cullinan.

Kevin Brown (27), a Pretoria east resident, was knocked down by a taxi while he was jogging in Constantia Park. According to witnesses, the taxi had skipped a red traffic light.    Brown spent a week in ICU at the Pretoria East hospital and a docket of reckless and negligent driving was opened at the Garsfontein police station.

A taxi driver was facing charges of culpable homicide after his taxi knocked over and killed a metro police officer on the Mabopane freeway. The driver was arrested.

How often do taxis cause fatal crashes?

ONLY A FEW TO MENTION …

11 March 2020 –  A head-on collision between a minibus taxi and a Toyota Avanza claimed the lives of 10 people – including three young children – on the Golden Highway, near Soweto in Gauteng, in the early hours of Wednesday morning.    “A taxi transporting passengers collided head-on with a Toyota Avanza on the Golden Highway, between Concorde Road and Stockwell Avenue. The [Avanza] driver and three children below the age of 10, who were in the Avanza, died on the scene.     “Six of the taxi passengers were also killed,” Minnaar said.
https://www.news24.com/news24/southafrica/news/golden-highway-taxi-crash-claims-10-lives-including-3-children-20200311
https://www.iol.co.za/the-star/news/17-people-killed-in-two-horrific-minibus-taxi-crashes-44574548

17 April 2020 – Several essential workers were among 15 people killed in a horror taxi crash on the N2 between Mount Frere and Mount Ayliff in the Eastern Cape on Wednesday. The vehicle was overloaded in terms of disaster regulations, but traffic authorities said the vehicle had gone through a police checkpoint a few kilometres before the crash site and had been compliant.
A taxi driver and his assistant, as well as several people who worked in a grocery store and others who had been out shopping, were killed late Wednesday afternoon when the taxi they were travelling in was involved in a head-on collision with a truck. The accident happened between Mount Frere and Mount Ayliff in the Eastern Cape at around 4.30pm.     It occurred shortly after 11 minibus taxis were turned around at a checkpoint between Graaff-Reinet and Aberdeen after police found that passengers had fake permits to attend a funeral.
https://www.dailymaverick.co.za/article/2020-04-17-overloaded-taxi-in-fatal-crash-might-have-picked-up-hitchhikers-minutes-before-accident/#gsc.tab=0

One person has died and almost 30 others have been injured in two separate taxi accidents on Friday night.     In Potchefstroom, a man in his 20s died during a collision between a taxi and a light motor vehicle in Ikageng Road. ER24 paramedics arrived on the scene at shortly after 19:20, along with local emergency personnel.   “A young man in his 20s who had suffered fatal injuries and showed no signs of life was found in the light motor vehicle. He was unfortunately, declared dead on arrival, said ER24 spokesperson Ross Campbell.    A 32-year-old man was also found trapped in the same vehicle.

In another incident on Friday night at around the same time, 15 people had critical to minor injuries after the taxi they were travelling in collided with a delivery truck close to Ladysmith.    The accident took place close to the intersection of the R103 and Harrismith Road.
https://www.news24.com/news24/southafrica/news/one-dead-close-to-30-injured-in-two-taxi-accidents-20200627

GOD FORBID: TAXI DRIVERS RUNNING FOR PARLIAMENTARY SEATS- THE SOUTH AFRICAN CIRCUS ARE ABOUT TO GET A FEW MORE CLOWNS.