It was reported in the media that the Police will be able to investigate the scene of a fatal hostage drama at the International Pentecost Holiness Church in Zuurbekom, west of Johannesburg.   Five people were killed there earlier on Saturday and police arrested 40 suspects while confiscating more than 30 firearms.   It’s understood the conflict is due to an ongoing battle over control of the church.    There’s been a tense atmosphere outside the headquarters of the church also known as Modise Church.

Is it really only about the leadership of the church.   What is inside the church and this is not the first time.     Something fishy.

Police have freed a group of people who were being held hostage at the International Pentecostal Holiness Church in Zuurbekom in the West of Johannesburg.

*
Who is the “leadership of the church”

It’s alleged ongoing conflict to succeed the leader of the church in Zuurbekom turned bloody when congregates allegedly attacked people who were inside, indicating that they were coming to take over the premises.

Five people have been killed and more than 40 suspects, including members of various security forces involved in the siege, have been arrested.

The police’s Vish Naidoo said: “Four men were shot in a vehicle and a fifth man, apparently a security official, was shot and killed in his vehicle. Police have arrested over 40 suspects and have recovered over 30 firearms. As the situation unfolds, the recovery of firearms is fluctuating.”

There are no guns around the neighborhood countries. These guns are smuggled by agents from the former Soviet Union block of countries. Certainly NOT Zimbabwe, Zambia Botswana, Namibia, Angola, Mozambique, Lesotho, Swaziland or even DRC or Tanzania…

There are no guns around the neighborhood countries. These guns are smuggled by agents from the former Soviet Union block of countries. Certainly NOT Zimbabwe, Zambia Botswana, Namibia, Angola, Mozambique, Lesotho, Swaziland or even DRC or Tanzania

1. What was in the church and who told them about it?
2. @SAPoliceService you need to find out what is going in that church bcos thes no way such armed ppl can just go to a specific church if thes nothing going on in that church

3. Who works with them from withing the church?

It was business as usual at the International Pentecostal Holiness Church in Zuurbekom‚ west of Johannesburg‚ as congregants attended a service under tight security — three days after violent clashes there.   TimesLIVE visited the area and found security guards at the entrance of the church. A private security patrol vehicle travelled up and down the 2km stretch of road linking the N12 to the church.

A number of police vehicles‚ including a Nyala‚ were stationed just off the N12 on the road leading to the church.   Minibus taxis were offloading passengers heading to the church complex during the day.   The situation on Sunday was in stark contrast to Thursday‚ when about 12 cars were damaged when one faction of the church allegedly opened fire on the other. Bullets and stones flew in the fracas. 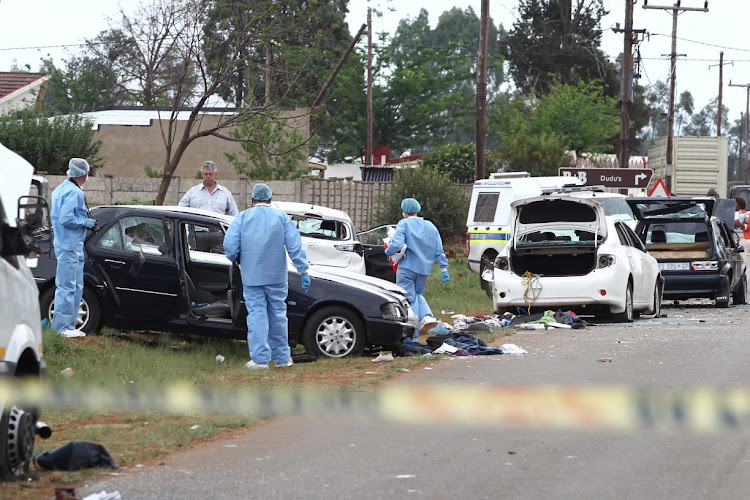 Church members‚ some in their blue and white church uniforms and others in maroon and white‚ who claimed to be from Limpopo‚ Mpumalanga and Mozambique‚ told TimesLIVE following Thursday’s violence that they had been stopped while driving to the church premises by another faction of the church who had cordoned off the road‚ telling them to go back.

“We found the road closed with several vehicles. We got out of our vehicles to enquire what was happening and we were told that we have no right to be at the church. All of a sudden there were rocks being thrown. We started running once we started hearing the gunfire‚” said one church member from Mpumalanga‚ who refused to give his name.

Some fled on foot‚ while others tried to jump into their vehicles to flee. One person was injured after being shot in the shoulder.

Trouble has been brewing at the church following the death of its leader‚ Glayton Modise‚ in February 2016.

Sowetan has previously reported there were disagreements over which of Modise’s children should succeed him‚ with one of them reportedly opening another branch of the church in his name in Lenasia‚ south of Johannesburg.

A fierce legal battle has broken out between the International Pentecost Holiness Church (IPHC) elders and the church’s late leader Glayton Modise’s daughter Jeanette Khumalo over access to the church’s bank accounts with funds worth over half a billion rand.

So intense is the battle that both parties – the IPHC executive council led by priest Joshua Bambo and Khumalo – have traded embezzlement accusations against each other over the disappearance of R115-million in cash from the church’s vault at its headquarters at Silo, Zuurbekom, south of Joburg.

There are also claims that at least R110-million has been siphoned from the church’s bank account since Modise died in February last year.

At the heart of the legal tussle, according to an affidavit deposed by Bambo at the South Gauteng High Court in Johannesburg, is an Absa bank account which according to him, holds funds totalling more than R250-million. Bambo also claims that Khumalo has been siphoning some funds from the account to an unknown bank account.

In his documents, Bambo appealed to the court to issue an order compelling Absa to give the executives of the church access to the account and also to remove Khumalo as a signatory.

The church elder told the court Khumalo was refusing to recognise their authority and was only prepared to listen to her brother, Tshepiso, the man they are opposed to taking over the leadership of the church to replace his late father.

Bambo said Khumalo was no longer a member in good standing at the IPHC and she could not be trusted with the day-to-day running of the church, especially its finances.

“Since the death of the comforter [Modise], Jeanette Khumalo has shirked her responsibilities to the church, and she also refused to recognise the authority of its governing structures. There is also disregard of financial controls of the church accounts, and it has resulted in millions in irregular, wasteful and several suspicious transactions,” reads Bambo’s affidavit.

He said the Modise family hold a view that they were entitled to take over the assets and affairs of the 3.5million-strong church as if it were a family business. “Thus, Tshepiso and his mother Marriam are involved in litigation with a view to wrestle control of the church from its members,” he said.

The church elder said the late Modise’s decision to appoint his daughter as a signatory to the church’s bank account was irregular.   According to the court documents, failure by the church’s executives to access the bank account has forced them to make monthly payments to creditors using hard cash.   He said some of the church’s suppliers were not happy with cash payments as they preferred electronic payments.

Among the monthly payments listed include:

Bambo said the executive committee has tried several times to speak to the local bank to allow them access to the account, but their pleas fell on deaf ears. Instructions to the bank to freeze the account and remove Khumalo as a signatory were also unsuccessful.

“I have been made aware by IPHC members who are employees of the bank that as of February 2016, the account held over R250-million. But I have not been able to confirm the information as the exco has no access to the accounts, and Modise’s daughter Jeanette does not account to it.”   The priest said the only statement the church has managed to obtain dates back to 2010 and shows that the account had an amount of R18-million.

Bambo said the executive council was the only legitimate structure of the church. It was elected at a special general meeting ordered by the court.

Bambo also reveals that church members voted against Tshepiso’s claim to be the new leader.

“As related to a position of spiritual leader, the church has adopted an approach that it will wait for the revelation by the holy spirit, as to who should be its next spiritual leader, as a comforter must be personally called by God to the task, and not merely elected or appointed to such a position,” reads the papers on the contested issue of church leadership.

Khumalo did not take kindly to the allegations against her and fought back against the call for her removal as a signatory on the church’s bank account.

She said the executive’s attempt was to unlawfully and prematurely gain control over the church’s affairs, assets and monthly cash offerings of up to R15-million.

Khumalo, in her responding affidavit which we have seen, accused the executive of being part of her late father’s second wife, Pearl Tafu’s faction.

She said the elders who filed the papers have been fully aware of her role in administering the accounts of the church for more than a year after the death of her father.

“I have been mandated to do so by my father … since 2012, and I continued to do so after his passing. All payments made on behalf of the IPHC from the accounts are audited on a regular basis by the appointed auditors of the church,” she said.

She also accused Tafu of hijacking the cash vault at Silo.

Khumalo further accused Tafu and the executive of instructing church members around the country and neighbouring countries to stop making deposits into the church’s account and take the money straight to Silo.

She said that as a result of the instruction, church elders have been attacked at their homes and robbed of tithes amounting to R100000.

Sunday World has seen a communique sent to church branches by the new executive informing them of a new account number of the church dated April 14 2017 and sent by IPHC head of finance team Priest Ntane.

Khumalo said under the leadership of the current executive, the church was unable to account for more than R115-million which was looted out of the vault at Silo.

She also decried the monthly security costs of R1.6-million, saying it was uncalled for and exorbitant.

Furthermore, Khumalo also challenged the legitimacy of the executive, saying that it was invalid because it was elected in violation of the IPHC constitution because the leader of the church was not given an opportunity to chair the meeting where they were elected.

She said her brother Tshepiso was a legitimate heir but he and his 50 loyal elders were blocked and excluded from participating in the special general meeting.

Khumalo also labelled the application as part of a violent and propaganda war that has been waged against her family since the death of their father.

She said the group of elders were being manipulated by Tafu because she was bitter she did not inherit anything from her father’s estate because their marriage was not recognised. 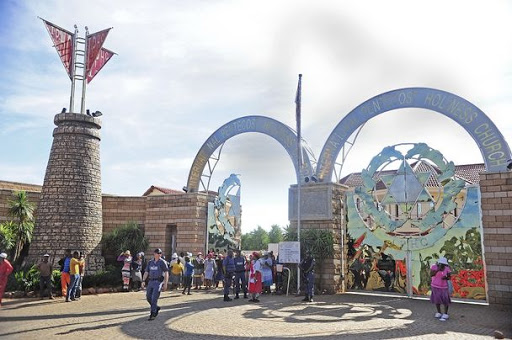 They have also interdicted Phatane Tribal Authority, Baroka Maloga Ditshelo and Chief Tobane April Masha from shutting down the church building in which services are held in Tubatse area, Limpopo.

Chief Masha was instructed to appear in court on October 30 to explain why the order should not be made permanent. The interdict was applied by advocate Papi Maluleke on behalf of the executive committee of the church’s headquarters in Silo, south of Joburg, after receiving complaints that members who want Leonard to ascend to the throne allegedly disrupted services and assaulted those who don’t recognise him or his eldest brother Tshepiso as the legitimate heir to the throne.