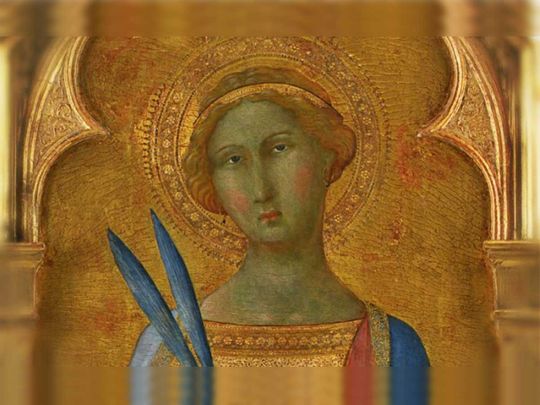 Who is St. Corona?    St Corona, whose relics are preserved in a basilica in the Italian city of Anzu, was the subject of a recent episode of the Catholic Talk Show.   During the show, Fr. Rich Pagano discussed about “The Catholic Church, Plagues, & The Coronavirus,” anchored by uCatholic founder Ryan Scheel, and Ryan DellaCrosse, founder/CEO of Fuzati, a tech-design site.

“St. Corona being called on in Northern Italy where her remains are,” Fr. Pagano explained.    St Corona, a martyr of the Catholic Church, lived in the 2nd Century. St Corona is closely associated with St Victor.

Together, the two were put to death by Roman soldiers around the year 170 AD.

The word “corona” is Latin for crown. Ironically, St. Corona is considered as one of the patron saints of pandemics sufferers.    St Corona, a martyr of the Catholic Church, lived in the 2nd Century. St Corona is closely associated with St Victor. Together, the two were put to death by Roman soldiers around the year 170 AD.    The dates and locations of their martyrdom are unclear. Most sources say it was in Syria, then under Roman rule. Some say Damascus; others, Antioch. Their feast day is  Most historians agree they died during the reign of Emperor Marcus Aurelius. Victor and Corona were put to death by order of a Roman judge named Sebastian.

The Italian city of Anzu, is right smack in the middle of the current coronavirus pandemic.   There is a basilica (called Santuario dei Santi Vittore e Corona) in Anzu where the relics of St. Victor and St. Corona have been preserved since the 9th century.

“She was a teenager, and was in a married relationship. She and her brother-in-law, St. Victor were martyred, Fr. Pagano said.   “As Roman soldiers gouged out St. Victor’s eyes, she cried out to encourage him to not give up. He kept the faith and boldly proclaimed it. He was martyred and then they captured her, and essentially, tied her to two bent-over palm trees and they ripped her from limb-to-limb,” he was quoted on aleteia.org, a catholic website.

The Roman Martyrology records under 14th May:

“In Syria, the holy martyrs Victor and Corona, under Emperor Antoninus [Marcus Aurelius].  Victor was subjected to diverse and horrible torments by the judge Sebastian.  Just then, as Corona, the the wife of a certain soldier, proclaimed him blessed for his constancy in his sufferings, she saw two crowns falling from heaven, one for Victor, the other for herself.  She related this to all present, and was torn to pieces between two trees, while Victor was beheaded”.

These saints were recorded in the martyrologies of “Jerome”, Bede, Florus, Adon and Usuard.

They were apparently ‘adopted’ at Ocriculum, as evidenced by two inscriptions (6th century) from San Vittore, Ocriculum.   Ludovico Jacobili (referenced below) has him born in Otricoli.  He dated the martyrdom to 14th May 168, and had the relics of both saints returned to Italy three years later by Italian soldiers who had served in Syria.  The body of St Corona and parts of that of St Victor (including his head) were sent to Otricoli.

Corona is especially venerated in Austria and eastern Bavaria. She is invoked in connection with superstitions involving money, such as gambling and treasure hunting.  Victor and Corona’s memorial day is 24 November (11 November in the Orthodox church calendar). Their feast day is 14 May.

Outside the town of Feltre in northern Italy, on the slopes of Mount Miesna, is the church of SS. Vittore e Corona, erected by the Crusaders from Feltre after the First Crusade.
https://en.wikipedia.org/wiki/Victor_and_Corona

The shrine with the relics of Saint Corona, believed to be the patron of epidemics, is seen at the cathedral in Aachen, Germany

‘We have brought the shrine out a bit earlier than planned and now we expect more interest due to the virus,’ said Aachen Cathedral spokeswoman Daniela Loevenich.   Saint Corona is believed to have been 16 years old when she was killed by the Romans, most likely in Syria, for professing the Christian faith.   The teenager suffered an excruciating death, according to legend. She was tied to two bent palm trees and then torn apart as the trunks were released.

Saint Corona’s relics, brought to Aachen by King Otto III in 997, were kept in a tomb underneath a stone in the cathedral until 1911-12 when they were placed in the shrine, which is 93 centimetres tall and weighs 98 kilograms.     The Roman Catholic cathedral at Aachen, built by Emperor Charlemagne in the ninth century, is one of Europe’s oldest.    Charlemagne was buried there in 814 and it was later used for the coronation of German kings and queens.

The cathedral stressed that Saint Corona is the patron saint of resisting all epidemics, not just the virus rapidly spreading across the globe.   It just so happens coronavirus received its name because under a microscope it looks like a globe with small globules, resembling a crown, said Ms Falk.

In Latin, Spanish and Russian, the word corona means crown or garland.