23 March 2020 – The SA National Defence Force (SANDF) has confirmed that the soldiers seen in Johannesburg are part of normal preparations to support the government in its effort to limit the Covid-19 outbreak.   “It is not a deployment as speculated,” the SANDF said on social media. “The SANDF would like to appeal to the public to remain calm.”   The update came after four busloads of soldiers with their luggage were seen arriving at the Rand Light Infantry base in Craighall, Johannesburg. 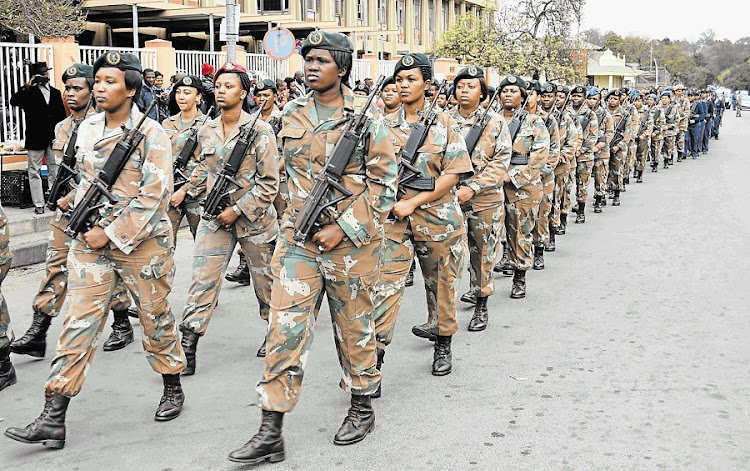 A directive, seen by Business Day on Monday afternoon and dated March 22, said the army’s mission is to give support to government departments during the coronavirus outbreak.   It orders the SA army infantry formation “to prepare, provide and sustain one subunit per province” from March 23 “until the outbreak is contained”.

“The companies will then return back to their units, demobilise and reorganise to continue with unit planned activities,” the directive said.    According to the directive, there should be “no liaison, press releases or statements … to be made in any form to the media or individuals”.     While the SANDF members may make arrests for offences suspects must be handed over to the SA Police Service and  the “principles of minimum force must always be executed”.

Minister in the presidency Jackson Mthembu confirmed that the SANDF  commander-in-chief, President Cyril Ramaphosa, addressed all on TV for further measures the government will take to contain the rapidly spreading coronavirus.   Security and defence analyst Helmoed Heitman told Business Day on Monday that while there were fewer soldiers in the country, they could definitely handle a lockdown, should Ramaphosa call for one in his address.   “The difficulty is that we have a hell of a small army,” said Heitman. He said Angola and Ethiopia had larger armies compared with SA’s, which is Africa’s most industrialised economy.

In its 2018 list of most powerful armies, military website Global Firepower ranks SA  33rd out of 136 countries, well behind all other Brics countries, the grouping of Brazil, Russia, India, China and SA.    The report stated that SA had just under 100,000 military personnel comprising 78,050 active personnel and 16,000 reservists.

It also estimated that the country had 14,100,000 citizens fit for service should SA enforce conscription laws.   However, Heitman said that should a lockdown be implemented soldiers could not be expected to be on duty 24/7.    “It does look like … we might be moving towards a lockdown. We have about 70,000 soldiers and reserve personnel of about 20,000. I don’t think [a lockdown will lead to a] massive crisis, we just need a command control system, a communications hub, and discipline,” he said.

Defence and military veterans minister Nosiviwe Mapisa-Nqakula’s spokesperson Joy Peter referred questions to SANDF head of communications Siphiwe Dlamini who could not immediately be reached for comment.     Kebby Maphatsoe, former defence deputy minister and president of the Umkhonto we Sizwe Military Veterans Association, told Business Day that they were behind Ramaphosa in fighting the spread of Covid-19.

“We will support the president in whatever decision he takes to save the lives of our people. We are also prepared … to come with ideas aimed at fighting this virus.”

Johan Burger, a senior researcher at the Institute for Security Studies, told Business Day: “I don’t see the president invoking a state of emergency … that could happen once the situation deteriorates, not in terms of number of people infected, but in terms of public disorder on a large scale.”

He said lockdown is provided for in disaster management legislation. “But I don’t think we will go to a state of emergency. That’s a last resort.”
https://www.businesslive.co.za/bd/national/2020-03-23-army-deploys-units-across-the-country-to-help-contain-covid-19-outbreak/

The South African National Defence Force (SANDF) arrived in Craighall, Johannesburg, sending the public into a frenzy about whether it signals a possible shutdown.

Passers-by have noticed a large gathering of SANDF officials in full uniform outside their command base on Jan Smuts.
https://www.news24.com/SouthAfrica/News/watch-coronavirus-more-questions-than-answers-as-sandf-seen-in-johannesburg-20200323