‘Coronavirus patients should not self-medicate with ibuprofen’: WHO
CONTACT YOUR DOCTOR
People who suspect they have caught the coronavirus should not take the popular drug ibuprofen without consulting a doctor, the World Health Organisation (WHO) says, pointing to ongoing research into possible negative effects. 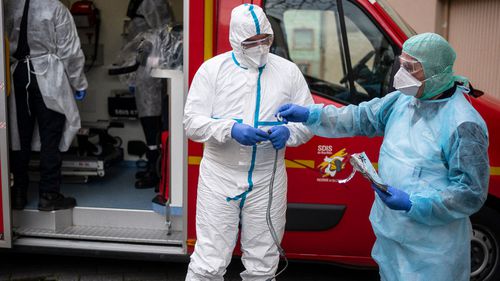 A 4-year-old British girl suffering from coronavirus-like symptoms grew worse after taking ibuprofen, her family said.    As health experts hotly debate whether the anti-inflammatory medicine should be taken to combat the contagion, Dan Collins of Bristol posted a dire warning on Facebook about his little girl Amelia.    “To those of you that have children please read. If your child has symptoms of corona virus, DO NOT give them ibuprofen,” Collins wrote.    “Amelia’s been unwell since Tuesday, cough, fever, cold. This morning she came into my room and got into my bed burning hot and not wanting to get up,” he wrote Sunday.

“Within an hour of giving her [ibuprofen] she dropped dramatically. She was panting while trying to breathe, her heart rate was very rapid, she couldn’t keep her eyes open, couldn’t lift her head up, her body was shaking, she started being sick on herself and her temperature had risen.   “We called back up and they sent out an emergency ambulance, once the paramedics got here they managed to bring her temp and stats down a bit, they’re still higher than normal but not dangerous high anymore,” Collins said.

“Now she’s back on [acetaminophen] she’s back to just being her poorly self. The paramedics only told us while here that were not to give her ibuprofen!”    Some top medical experts are warning against taking ibuprofen if the coronavirus is suspected.

While ibuprofen is used to treat pain, including from headaches and sore throats, along with colds, it “can have a depressive effect on parts of our immune systems” — a real danger for coronavirus sufferers, wrote Dr. Amir Khan, of Britain’s public health care National Health Service, in Al Jazeera.

“If we take medicines that dampen this immune response, such as ibuprofen, this can lead to us not fighting off the infection as effectively, potentially leading to a longer illness with a higher risk of complications,” he said.  Khan said alternatives for pain and fever could include paracetamol, commonly known as Panadol, or acetaminophen, which is the main ingredient in Tylenol.

Covid-19: ibuprofen should not be used for managing symptoms, say doctors and scientists

Scientists and senior doctors have backed claims by France’s health minister that people showing symptoms of covid-19 should use paracetamol (acetaminophen) rather than ibuprofen, a drug they said might exacerbate the condition.

His comments seem to have stemmed in part from remarks attributed to an infectious diseases doctor in south west France. She was reported to have cited four cases of young patients with covid-19 and no underlying health problems who went on to develop serious symptoms after using non-steroidal anti-inflammatory drugs (NSAIDs) in the early stage of their symptoms. The hospital posted a comment saying that public discussion of individual cases was inappropriate.

But Jean-Louis Montastruc, a professor of medical and clinical pharmacology at the Central University Hospital in Toulouse, said that such deleterious effects from NSAIDS would not be a surprise given that since 2019, on the advice of the National Agency for the Safety of Medicines and Health Products, French health workers have been told not to treat fever or infections with ibuprofen.

Experts in the UK backed this sentiment. Paul Little, a professor of primary care research at the University of Southampton, said that there was good evidence “that prolonged illness or the complications of respiratory infections may be more common when NSAIDs are used—both respiratory or septic complications and cardiovascular complications.”

He added, “The finding in two randomised trials that advice to use ibuprofen results in more severe illness or complications helps confirm that the association seen in observational studies is indeed likely to be causal. Advice to use paracetamol is also less likely to result in complications.”

Ian Jones, a professor of virology at the University of Reading, said that ibuprofen’s anti-inflammatory properties could “dampen down” the immune system, which could slow the recovery process. He added that it was likely, based on similarities between the new virus (SARS-CoV-2) and SARS I, that covid-19 reduces a key enzyme that part regulates the water and salt concentration in the blood and could contribute to the pneumonia seen in extreme cases. “Ibuprofen aggravates this, while paracetamol does not,” he said.

Charlotte Warren-Gash, associate professor of epidemiology at the London School of Hygiene and Tropical Medicine, said: “For covid-19, research is needed into the effects of specific NSAIDs among people with different underlying health conditions. In the meantime, for treating symptoms such as fever and sore throat, it seems sensible to stick to paracetamol as first choice.”

Rupert Beale, an infectious diseases researcher at the Francis Crick Institute, had a warning on cortisone, however. “Patients taking cortisone or other steroids should not stop them except on advice from their doctor,” he said.

The complex role that the immune system might play in covid-19 disease has been underscored by reports that Swiss drug company Roche has secured approval from China for its anti-inflammation drug Actemra (tocilizumab) to treat patients developing severe complications from covid-19.

Some doctors in Italy, including Paolo Ascierto of the Pascale Hospital in Naples, claim that they have had success treating severely ill patients with the drug, which blocks the key inflammatory molecule interleukin-6.

There is speculation that the drug might prevent fatal “cytokine storms,” in which the immune system of seriously ill patients can cause organ failure.

“#COVID-19 The taking of anti-inflammatories [ibuprofen, cortisone…] could be a factor in aggravating the infection. In case of fever, take paracetamol. If you are already taking anti-inflammatory drugs, ask your doctor’s advice.”

The comments made by Mr Véran, who is a qualified doctor and neurologist, have been widely reported in the British press.

Some health professionals have warned that paracetamol is preferable to ibuprofen, as it is less likely to cause side effects in people with underlying health issues, who are also more susceptible to Covid-19. (Cortisone is not commonly used in the UK to relieve symptoms like fever.)

Until March 16, when this article was first published, NHS advice for people self-isolating because of the new coronavirus recommended drinking lots of water and taking “everyday painkillers, such as paracetamol and ibuprofen, to help with your symptoms”.

However, the NHS has now changed this guidance. Although it says there is “currently no strong evidence that ibuprofen can make coronavirus (Covid-19) worse”, it recommends using paracetamol to treat the symptoms “until we have more information”. The exception to this is if a doctor has told you not to use paracetamol.

It adds that, if you are taking ibuprofen or other non-steroidal anti-inflammatories (NSAID) on the advice of a doctor, you should not stop doing so without checking first.

Experts have warned paracetamol may be preferable to ibuprofen

Dr Charlotte Warren-Gash, associate professor of epidemiology at the London School of Hygiene and Tropical Medicine, said that NSAIDs like ibuprofen “should be prescribed with caution for people who have underlying health conditions”.

“For Covid-19, research is needed into the effects of specific NSAIDs among people with different underlying health conditions, which takes into account the severity of infection. In the meantime, for treating symptoms such as fever and sore throat, it seems sensible to stick to paracetamol as first choice.”

Dr Rupert Beale, group leader in cell biology of infection at The Francis Crick Institute, said: “There is good reason to avoid ibuprofen as it may exacerbate acute kidney injury brought on by any severe illness, including severe Covid-19 disease.

“There isn’t yet any widely accepted additional reason to avoid it for Covid-19.”

Professor Paul Little, professor of primary care research at the University of Southampton, said there was “sizeable literature” from case control studies in several countries that the complications of respiratory infections – whether respiratory, septic or cardiovascular complications – can be “more common when NSAIDs are used.”

He added that using paracetamol was “less likely to result in complications”.

On 16 March, Public Health England confirmed there is not enough information on ibuprofen use and Covid-19 to advise people to stop using ibuprofen, and said there is no published scientific evidence that ibuprofen increases the risk of catching Covid-19 or makes the illness worse.

Full Fact contacted PHE for more information about the decision to change the NHS guidance the next day, but has not yet received a response.

Asked by the government’s health and science committee about the concerns over taking ibuprofen on 17 March, government chief scientific adviser Sir Patrick Vallance said the warnings “may or may not be right, I don’t know. But the sensible thing to do I think would be to say well don’t take it at the moment. Take something else, paracetamol or something.”

If taking any painkillers, you should always follow the instructions on the label and make sure you do not exceed the stated dose.

Patients prescribed NSAIDs for long-term health problems should take them as directed by a healthcare professional.
https://fullfact.org/health/covid-19-ibuprofen/

WHO spokesman Christian Lindmeier told a Geneva press conference that there are no recent studies that link the anti-inflammatory drug with increased mortality rates but he added that experts are currently investigating the matter.    “We recommend paracetamol, not ibuprofen in self-medication,” Lindmeier said.

This group of pharmaceuticals includes ibuprofen, aspirin and other drugs.

A recent article in medical journal The Lancet put forward the hypothesis that some drugs including ibuprofen might pose a risk for COVID-19 patients who also suffer from high blood pressure or diabetes.

Spokesman Lindmeier also reported that two WHO staff members have been infected with the SARS-CoV-2 coronavirus that causes the COVID-19 respiratory disease.   Several hundred WHO staffers started working remotely from home.   The UN health agency no longer invites journalists to its premises to update them on the coronavirus pandemic but broadcasts its briefings on social media.