Dalk vir baie ‘n artikel van paar maande gelede, tog kan mens nie help om weer hier aan te dink nie.   Hulle reis heelwat in Afrika rond.   Protected by an umbrella as heavy rain fell, the world’s richest man walked into one of SA’s most desperately impoverished townships during October 2019.    Bill Gates, founder of Microsoft, and his wife Melinda visited the Inkanini Primary School in Khayelitsha.   It was not immediately clear what brought the family to Site B in Khayelitsha but their foundation has done significant work previously in the country. 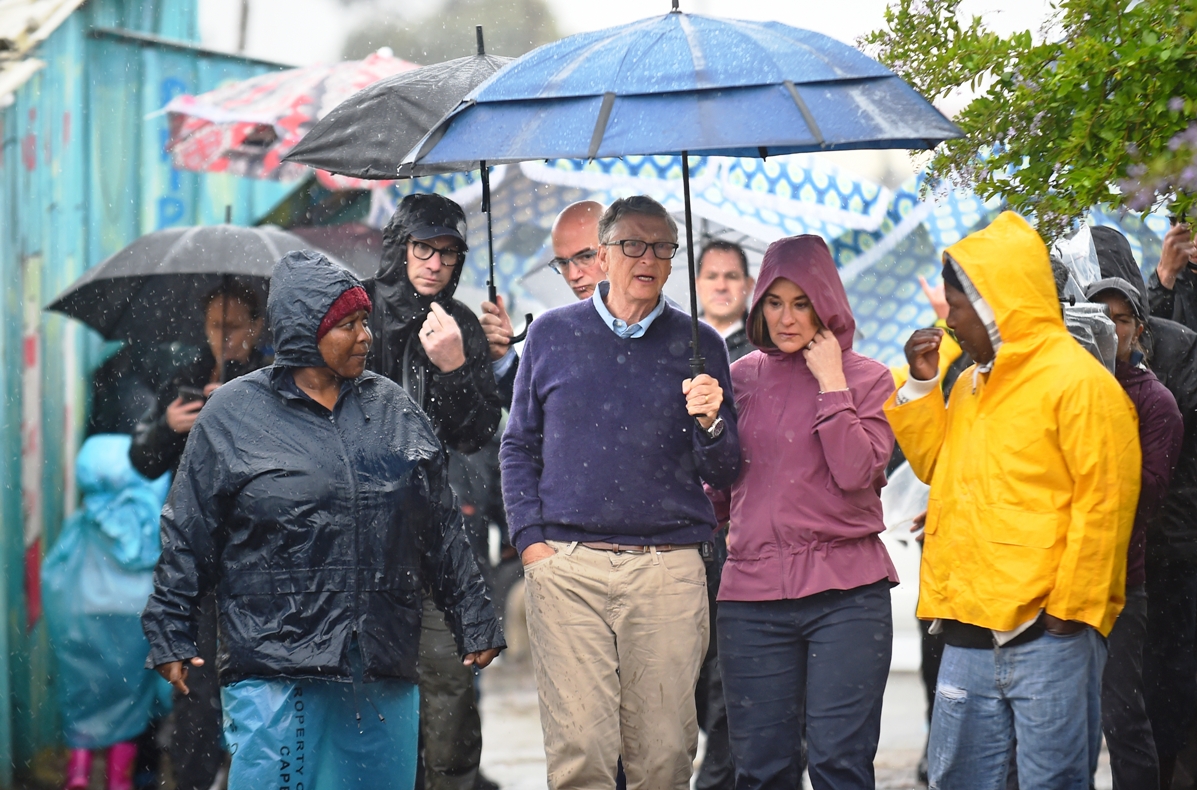 The media reported that the Bill and Melinda Gates Foundation serves several interests in SA, including HIV/Aids prevention programmes that began in 1999, water and sanitation and agriculture.   “SA is a country with global influence that has both significant challenges, including high rates of HIV and TB, and critical assets, such as a world-renowned scientific and research community,” according to the foundation’s website.

“Since making our first grants here in 1999, we have been committed to addressing these issues and investing in its promising future.    “We are working with SA to apply its clout, research, and solutions to address its greatest needs.”   The Economic Times reported that Gates had just reclaimed his title as the world’s richest man after Amazon founder and CEO Jeff Bezos saw his shares fall 7%.

(and who’s fault is this – after nearly 30 years, they all blame the old regime and apartheid for their poverty, lack of maintenance and municipal services)

Made by Light Lounge Studio, our Foundation shows the highlights of our official handover of R2.3 Million worth of equipment to the Khayelitsha District Hospital in Cape Town, South Africa. With all of our corporate donors, we are excited about the change we are making in South Africa. See more at http://www.samefoundation.org.za

Trauma physicians at Cape Town’s Khayelitsha Hospital are well used to chaotic Saturday nights, when they might see multiple stabbing and gunshot victims come through the doors.

Thousands of people every week seek help from doctors and nurses at the Khayelitsha Hospital in Cape Town. And while many complain about public health facilities, few take the time to listen to the challenges. Doctors and nurses at Khayelitsha Hospital say they are struggling with limited resources to help the township’s residents. The Western Cape health minister Nomafrench Mbombo says her department has a plan to build more health facilities to meet the needs of locals. (Video by Yazeed Kamaldien)

The Khayelitsha District Hospital (KDH) has become the fifth hospital to receive a blood bank through a partnership between the Western Cape government and the Western Cape Blood Service (WCBS).

The blood bank will operate for 24 hours and will result in rapid availability of cross-matched blood to the hospital and other surrounding hospitals, where the demand is always high, particularly in trauma wards.

Gregory Bellairs, chief executive of Western Cape Blood Service, said this was the first blood bank they had opened in more than 20 years.

“This has enabled us to bring the blood supply closer to the patients of this and surrounding hospitals, and that includes improving our ability to supply blood on the Cape Flats where the epidemic of trauma and violence is high, as well as the burden of disease,” Bellairs said.

“We identified that this would improve patient outcomes if we established a blood bank that will be central in the Cape metro, and explored the Mitchells Plain Hospital as a possible site but we eventually settled for the KDH,” he added.

He said they have been able to supply the whole Cape Town from existing blood banks, which are in four hospitals.

“Khayelitsha is classified as a red zone, as it has a lot of interpersonal violence with gunshot and stab wounds cases in the emergency care. Bringing this service closer to the people is even much more necessary as blood is a precious gift, which will enable us to save more lives” he said.

Bellairs said the usage of group O blood was disproportionately high, and called on more people to donate blood.

“Even though we generally have enough blood it is desirable to have more people to become blood donors and donate more blood,” he said.