Hundreds of supporters of an influential, radical Shi’ite cleric gathered 24 January in central Baghdad for a rally to demand that American troops leave the country amid heightened tensions after a US drone strike earlier this month killed a top Iranian general in the Iraqi capital.    Since mid-morning on the Muslim day of prayers, loudspeakers blasted “No, no America!” at a central square in the Iraqi capital. A child held up a poster reading, “Death to America. Death to Israel”. 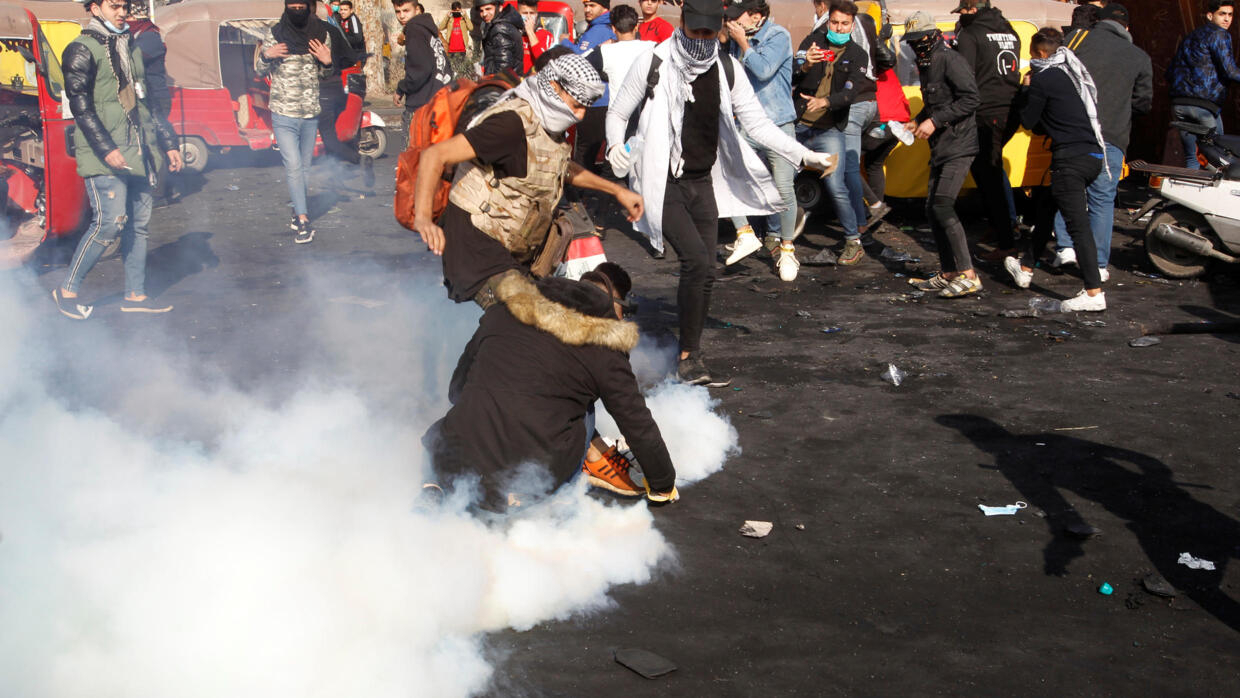 Since mid-morning, large crowds gathered on the Muslim day of prayers as loudspeakers blasted “No, no America!” at a central square in Baghdad. A child held up a poster reading, “Death to America. Death to Israel.” But by the afternoon the rally had failed to reach the critical numbers called for by radical cleric Muqtada al-Sadr.

A million’ Iraq rally against US troops

Roads and bridges leading to the heavily fortified Green Zone, the seat of Iraq’s government and home to several foreign embassies, including the US Embassy, were blocked off by concrete barriers. Iraqi security forces stood guard, blocking access to the gates to the zone.      There was a heavy security presence as the protesters, mostly hailing from the capital but also Iraq’s southern provinces, walked on foot to an assembly point in Baghdad’s Jadriya neighborhood, waving Iraqi flags and wearing symbolic white shrouds.

Shi’ite cleric Moqtada al-Sadr, whose party won the most number of seats in the May 2018 parliamentary elections, had called for a “million-man” demonstration to demand the withdrawal of American troops following the US drone strike near Baghdad’s airport that killed top Iranian general Qassem Soleimani and senior Iraqi militia commander Abu Mahdi al-Muhandis, an attack that sparked the ire of Iraqi officials from across the political spectrum.     Friday’s rally is supported by mainstream Shi’ite parties, including al-Sadr’s political rival Hadi al-Ameri, who heads the Fatah bloc in parliament, as well as the Popular Mobilization Units, an umbrella group comprised of an array of militias, including Iran-backed groups.

In response to a public outcry over the US airstrike, Iraq’s parliament passed a non-binding resolution this month calling on the government to expel foreign troops from the country. Kurdish and most Sunni lawmakers boycotted the vote.

“The American forces should leave,” said an 18-year-old protester, Amer Saad. “I am ready to fight against the Americans if Moqtada al-Sadr asks us.”    Police and militiamen of the Popular Mobilization Units also closed off roads leading to the protest site, in both the Karada and Jadriya neighbourhoods of Baghdad.

Hundreds of supporters of an influential, radical Shi’ite cleric gathered Friday in central Baghdad for a rally to demand that American troops leave the country amid heightened tensions after a US drone strike earlier this month killed a top Iranian general in the Iraqi capital.

Iraqi riot police opened fire on 21 January amid clashes with anti-government protesters on a central Baghdad highway, killing one person and wounding over a dozen people, officials said, the latest since violence erupted again last week between demonstrators and security forces.   The clashes on the key Mohammed al-Qassim highway broke out when riot police moved in to disperse a crowd of mostly young men who had gathered there. The protesters burned tires, halting traffic along the key artery and some protesters hurled Molotov cocktails, or fire bombs at the riot police.

Police shot live rounds and fired tear gas canisters at the crowd. At least 14 protesters were wounded, their injuries ranging from severe to moderate. One protester died after being struck by a tear gas canister to the head, according to police and medical officials and activists.   As the violence escalated, the police pulled back, allowing demonstrators to take over the thoroughfare, eyewitnesses said, speaking on condition of anonymity, fearing reprisals.

Meanwhile, outgoing Prime Minister Adel Abdul-Mahdi condemned an overnight triple-rocket attack targeting the heavily fortified Green Zone, the seat of Iraq’s government, and ordered an investigation into the incident, military spokesman Maj. Gen. Abdul Karim Khalaf said. The Katyusha rockets had fallen near the U.S. Embassy but caused no casualties.   The Mohammed al-Qassim highway connects areas in Baghdad’s Rusafa, a district to the east of the Tigris River. Protesters have already blocked three central bridges – Sinak, Jumhuriyah and Ahrar. Blocking the highway threatens to halt movement altogether in the central part of Baghdad.

The Green Zone attack was the second rocket attack to target the area in the last two weeks, amid soaring tensions between Washington and Tehran after a U.S. drone strike killed top Iranian General Qassem Soleimani in Baghdad earlier this month.    According to a security official, two of the rockets had breached the outermost fence but did not strike near the embassy’s heavily fortified walls. All the officials spoke on condition of anonymity under regulations.

BAGHDAD
(19 Jan 2020) Protesters continued to block main road in the Iraqi capital Baghdad and in the holy city of Najaf on Sunday. Thick black smoke rose in the air as protesters burned tires to express their anger after months of protesting. In Baghdad, protesters are occupying three key bridges, Jumhuriya, Ahrar and Sinak, in a standoff with security forces. Iraqi officials said 12 protesters were wounded by security forces in Baghdad.   On Sunday, protests spread from the capital to the Shiite majority city of Najaf, where Iraqi youth also set tires ablaze and chanted against politicians. Najaf has been one of the flashpoints in the Iraqi protest movement, after demonstrators repeatedly torched the Iranian Consulate there. A leaderless uprising shook Iraq on Oct. 1, with thousands of Iraqis taking to the streets in Baghdad and the predominantly Shiite southern Iraq decrying corruption, poor services, lack of jobs and calling for an end to the political system that was imposed after the 2003 U.S. invasion.

O world, we in Iraq are demonstrating against the corrupt Iraqi government that is controlled by Iran and the government forces are killing us with live bullets, please save Iraq #USvsIran #العراق #العراق_يتعرض_لإبادة_جماعية #iraq #Baghdad #IraqProtests pic.twitter.com/A2WQqoxHR8

2 gedagtes oor “‘No, no America!’ as Baghdad protesters demand US troops quit Iraq”