Sprawled across a spent volcano on the remote edge of the Great Victoria Desert in Western Australia, the Mount Weld mine seems a world away from the U.S.-China trade war.  But the dispute has been a lucrative one for Lynas Corp., Mount Weld’s Australian owner. The mine boasts one of the world’s richest deposits of rare earths, crucial components of everything from iPhones to weapons systems. 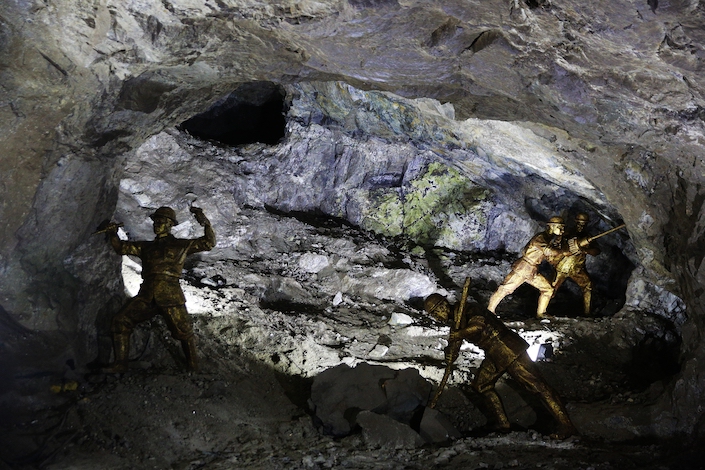 Hints this year by China that it could cut off rare earths exports to the United States as a trade war raged between the two countries sparked a U.S. scramble for new supplies — and sent Lynas shares soaring.   As the only non-Chinese company thriving in the rare earths sector, Lynas shares have gained 53 percent this year. The shares jumped 19 percent earlier this month on news that the company may submit a tender for a U.S. plan to build rare earths processing facilities in the United States.

Rare earths are crucial for producing electric vehicles and are found in the magnets that run motors for wind turbines, as well as in computers and other consumer products. Some are essential in military equipment such as jet engines, missile guidance systems, satellites and lasers.   Lynas’ rare earths bonanza this year has been driven by U.S. fears over Chinese control of the sector. But the foundations for that boom were established almost a decade ago, when another country — Japan — experienced its own rare earths shock.

In 2010, China restricted export quotas of rare earths to Japan following a territorial dispute between the two countries, although Beijing said the curbs were based on environmental concerns.

Fearing that its high-tech industries were vulnerable, Japan decided to invest in Mount Weld — which Lynas acquired from Rio Tinto in 2001 — in order to secure supplies.   Backed by funding from Japan’s government, a Japanese trading company, Sojitz, signed a $250 million supply deal for rare earths mined at the site.

“The Chinese government did us a favor,” said Nick Curtis, who was executive chairman at Lynas at the time.    The deal also helped fund the building of a processing plant that Lynas was planning in Kuantan, Malaysia.    Those investments helped Japan cut its rare earths reliance on China by a third, according to Michio Daito, who oversees rare earths and other mineral resources at the Ministry of Economy, Trade and Industry.

The deals also set the foundations for Lynas’ business. The investments allowed Lynas to develop its mine and get a processing facility in Malaysia with water and power supplies that were in short supply at Mount Weld. The arrangement has been lucrative for the firm.   At Mount Weld, ore is concentrated into a rare earth oxide that is sent to Malaysia for separating into various rare earths. The remainder then goes to China, for further processing.

Mount Weld’s deposits have “underpinned the company’s ability to raise both equity and debt funding,” Amanda Lacaze, the company’s chief executive, said in an email. “Lynas’ business model is to add value to the Mount Weld resource at its processing plant in Malaysia.”

Andrew White, an analyst at Curran & Co. in Sydney, cited “the strategic nature of Lynas being the only producer of rare earths outside of China” with refining capacity for his ‘buy’ rating on the company. “It’s the refining capacity that makes the big difference.”
Targeting the U.S.

Lynas in May signed an agreement with privately held Blue Line Corp. in Texas to develop a processing plant which would extract rare earths from material sent from Malaysia. Blue Line and Lynas executives declined to give details about cost and capacity.    Lynas has said it would submit a tender in response to a U.S. Department of Defense call for proposals to build a processing plant in the United States. Winning the bid would give Lynas a boost to develop the existing plant at the Texas site into a separating facility for heavy rare earths.

James Stewart, a resources analyst with Ausbil Investment Management Ltd. in Sydney, said he anticipated that the Texas processing plant could add 10 to 15 percent to earnings annually.   Lynas was in pole position for the tender, he said, given that it could easily send material processed in Malaysia to the United States, and convert the Texas plant relatively cheaply, something that other companies would struggle to replicate.   “If the U.S. was thinking about where best to allocate capital,” he said, “Lynas is well and truly ahead.”

Challenges remain, however. China, by far the leading producer of rare earths, has stepped up production in recent months, while declining global demand from electric vehicle-makers has also driven prices down.    That will put pressure on Lynas’ bottom line and test the U.S. resolve to spend to develop alternative sources.  The Malaysia plant has also been the site of frequent protests by environmental groups concerned about the disposal of low level-radioactive debris.

Lynas, backed by the International Atomic Energy Agency, says the plant and its waste disposal are environmentally sound.   The company is also tied to an operating license that expires March 2, although it is widely expected to be extended. But the possibility that more stringent license conditions could be enacted by Malaysia has deterred many institutional investors.

Highlighting those concerns, on Dec. 17, Lynas shares fell 3.2 percent after the company said an application to increase production at the plant failed to get approval from Malaysia.    Still, Lynas says it sees great long-term potential for the niche it has carved out.   “We will continue to be the supplier of choice to non-Chinese customers,” Lacaze told the company’s annual general meeting last month. 13 December 2019 – The United States military is poised to put its money where its mouth is as Lynas Corp. Ltd. looks to build a new heavy rare earths processing plant in Texas.  The U.S. Department of Defense has called for tenders as it looks to pour money into new on-shore processing plants, with Lynas considered a frontrunner given its track record in rare earths production, ownership of the world-class Mount Weld mine in Western Australia and existing joint venture plans in the U.S.

Lynas said it expected to lodge a compliant tender after reports the U.S. military will meet the majority of the cost of building a processing plant as well as cover most operating costs, and potentially fund more than one project in a sign of how determined it is to reduce reliance on supply from China.

It is understood the source of the raw rare earths material will be a factor in deciding the tender, putting Lynas in the box seat for what is touted as the US military’s first investment in large-scale rare earths production since World War II’s Manhattan Project to build the atomic bomb.

The company’s share price has jumped sharply this week, from AU$2.10 ($1.45) on Monday to AU$2.56 in late trade on Friday, with the window to lodge tenders set to close on Monday.

Rare earths materials are used in everything from night vision goggles to cruise missiles and are also in increasing demand for uses in electric vehicles, wind turbines, automation, electronics and oil and gas refining.

The Australian Financial Review reported in May that Lynas was likely to have the might of the U.S. military on its side as it looked to develop rare earths processing capacity near San Antonio, where its joint venture partner Blue Line, a privately-owned specialist chemical procurement company, is based.

Under a proposed joint venture, Lynas plans to send heavy rare earths material to Texas for separation into high-value dysprosium and terbium.

The company believes it can fill a hole in the US supply chain, in what Lynas managing director Amanda Lacaze has said is a move likely to be welcomed by the Department of Defence.   “We are very pleased that governments around the world are recognising the importance of rare earths,” she said.   “We have previously indicated our intent to expand our industrial footprint to the US and we are confident that we have the feedstock and the technical know-how to create a viable heavy rare earths separation business.”

Dylan Kelly, a mining analyst at Australian wealth management group Ord Minnett, said the tender process appeared a near one-horse race based on Lynas’ capacity to supply feedstock and its experience and expertise in rare earths processing.   Kelly said the processing plant could be built at an existing Blue Line site for about $30 million with the US military picking up most of the bill.

U.S. President Donald Trump raised the issue of rare earths in discussions with former Australian Prime Minister Malcolm Turnbull as far back as February 2018, and the U.S. Department of Defense has since increased its engagement with Australian rare earths companies.

Lynas is the world’s largest producer of rare earths material outside China. However, it does not have capacity to separate heavy rare earths into dysprosium and terbium.      The company currently supplies heavy rare earths mined at Mount Weld and refined at its AU$1 billion processing plant in Malaysia to China, where it is separated into what have emerged as key ingredients in military applications.

Chinese President Xi Jinping raised fears about cutting off supply to the U.S. earlier this year at a flash point in the trade war between the two global heavyweights.

Trump made developing non-Chinese supply chains a top priority in July when he cleared the way for the Department of Defense to fund rare earth technology and resources.

Trump said it was essential for U.S. defense to have domestic capability to separate and process light and heavy rare earth materials, as well as to make permanent magnets.