Two cash heists were reported in the Pretoria area alone on 29 November, say Gauteng police.   In the first, a security guard was shot and wounded in Pretoria West.   The guard had just collected cash at a store in the Kit Kat Shopping Centre.   On his way to the cash van, he was approached by a man who shot him in the right leg and robbed him of an undisclosed amount of money,” said Muridili. “The suspect and his accomplices fled the scene in a white SUV,” said Muridili.   Some reports said that the getaway vehicle was an ambulance but Muridili said that this was not so.

A second heist was reported on the N1 near the Hammanskraal area.

The aftermath of the heist which occurred on the N1 near Pretoria this afternoon. Video supplied. @TimesLIVE 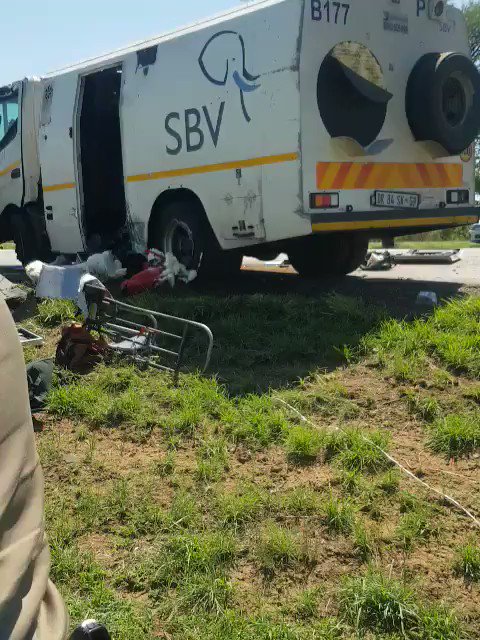 “A vehicle allegedly drove into the armoured vehicle and the  impact caused the vehicle to roll,” said MuridilI.   Once the vehicle was stationary, another vehicle, an SUV, approached from the same direction and stopped at the scene.   “Three suspects, all armed with rifles, got out of their car and approached the armoured vehicle. The suspects allegedly used explosives to bomb the vehicle and fled the scene with an undisclosed amount of money.”   Muridili said the guards were all injured when their vehicle rolled.   “They were taken to hospital,” said Muridili.

SBV confirmed that their vehicle was hit in the second heist.   “Our teams are investigating the incident and will communicate relevant information as soon as it becomes available,” the company said.   Group CEO Mark Barrett said he hoped the perpetrators would be found.

“As a responsible corporate citizen, SBV thoroughly investigates all incidents. SBV does not tolerate any violence, crime or threats to human lives. We will tirelessly persist in our efforts to mitigate cash-in-transit (CIT) crime and together with the authorities and the CIT industry, we will ensure that the perpetrators involved in such attacks are brought to justice,” Barrett said.   He called on anyone with information to contact their Early Warning Robbery Hotline.

Video footage shows how onlookers flocked to the scene of a brazen cash-in-transit heist at an intersection on the R566 on the N4 north of Pretoria – hoping to find money.   National police spokesperson Colonel Brenda Muridili said the cash van was travelling from Rosslyn to Silverton when it came under attack on Monday.   Suspects travelling in three SUVs, and armed with rifles, fired several shots at the cash van’s tyres, bringing it to a halt.   “The suspects were wearing blue overalls with balaclavas and hand gloves. They approached, pointed firearms, opened the door and took the driver’s firearm.   “The suspects bombed the truck, took an unknown amount of money and fled the scene,” she said.    A video of the aftermath of the heist showed people scouring the scene of the blast for bank notes.   No injuries were reported and no arrests were made.

A shootout between police and suspected cash-in-transit robbers travelling in a taxi left three people dead and eight arrested outside Cape Town.   The Hawks, in conjunction with specialised law enforcement agencies, intercepted a taxi heading towards Cape Town on the N1 from Paarl on Tuesday afternoon.   The taxi was transporting suspects allegedly involved in multiple cash-in-transit heists in the Eastern Cape.    “The occupants of the taxi allegedly fired at the team and the police returned fire,” said Hawks spokesperson Lt-Col Philani Nkwalase.

Six suspects were arrested unharmed and two were injured. Three others were killed.

An undisclosed amount of money was seized, and the remaining suspects face charges of attempted murder and possession of suspected stolen property.   The Independent Police Investigative Directorate is investigating the fatal shooting of the three suspects.

The N1 road near Hammanskraal is partly closed due to a reported cash- in -transit robbery. A post on Traffic Policing Affairs Limpopo says this will effect motorist traveling both directions.

Police noticed a sudden spike in cash-in-transit robberies since the start of September 2019 with multiple incidents. On the 4th of September, police made a breakthrough when 12 robbery suspects were arrested. The suspects were on their way to commit a robbery when they were arrested. Police are on the hunt for a gang of about 10 armed suspects who bombed a cash van on Monday afternoon. The incident took place on the N2 near Mandeni, north of Durban just after 4:30pm. It is alleged that the van had been travelling along the N2 when it came under attack by heavily-armed gang. IPSS Medical spokesperson, Paul Herbst, said their emergency teams and advanced life paramedics had been alerted to the incident. He said when they arrived at the scene, they found that the cash van had been bombed. Herbst said an undisclosed amount of money had been taken. Police are yet to make an arrest.

A group of men allegedly robbed a cash-in-transit team of an undisclosed amount of money and a firearm at an Engen garage in Protea Glen EXT 16, Johannesburg on September 20 2019. Three armed men allegedly confronted the crew as they were about to leave the premises. One of the team members was allegedly shot in the leg by the suspects, who then took his firearm. A case has been opened, but no arrests have been made.