Pray for the people of Australia.   There are more than one million hectares of land have been devastated by fire in this fire season alone.
A state of emergency has been declared in Australia over escalating wildfires. David Elliott, the New South Wales minister for police and emergency services said the country faced what “could be the most dangerous bushfire week this nation has ever seen”.   So far, at least three people have died, 100 people have been injured and 150 homes and buildings have been destroyed by the blazes devastating swathes of the eastern coast. The situation looks set to worsen as hot and dry winds pick up in strength. 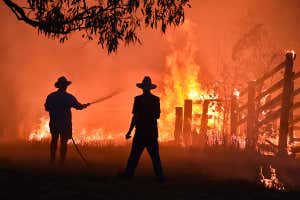 Temperatures into the mid 30s, very low humidity and gusty winds once again threaten the state this weekend, after a week of firefighting that saw “catastrophic” conditions and four lives lost.

NSW remains in a state of emergency, with severe fire danger ratings issued for New England, the Northern Slopes and northwestern regions on Saturday. Total fire bans are in effect in those areas, as well as the far north coast, which has been issued a very high fire danger.

Four people have died so far and the RFS said more than 250 homes have been destroyed, almost 90 homes have been damaged, and some 480 outbuildings and 18 facilities have also been razed. In some positive news the RFS believes their efforts have saved more than 2000 buildings.
https://www.news.com.au/technology/environment/nsw-qld-fires-rfs-commissioner-warns-a-long-way-to-go-in-bushfire-battle/live-coverage/6b8809b22f2723395473eb8e71c15703
*

A teen boy has been charged with arson after 14 homes were destroyed during a bushfire in central Queensland.

“In south-east Queensland and northern New South Wales, the last three years have been drier and warmer than usual,” says Richard Thornton at the Bushfire and Natural Hazards Cooperative Research Centre. “When preceding conditions have been like this, and the bush and grass is so dry, it doesn’t take much for a fire to get going once the wind is up.”

People living in and around Sydney, one of the most populous parts of the country, have been warned of “catastrophic” fire conditions for the first time since the classification was introduced in 2009. More than 100,000 homes in the area are within 100 metres of the bush and are at risk, according to consultancy firm Risk Frontiers

Smoke particles from bushfires in Australia have reached South America, in a striking illustration of the intensity of the unprecedented blazes.   Satellites show atmospheric pollution created by the fires across New South Wales and Queensland has travelled more than 10,000 kilometres to Chile and Argentina. Researchers at the European Centre for Medium-Range Weather Forecasts (ECMWF) in Reading, UK, found a plume of carbon monoxide and aerosols trailing across the Pacific Ocean to South America. 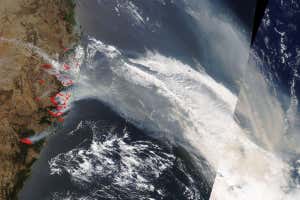 *
A major fire emergency is erupting on Sydney’s outskirts tonight. Residents have been ordered to evacuate around the Colo Heights region as a blaze covering 85,000 hectares sends smoke over Sydney and the Central Coast.

More pollution will follow, judging from the situation in Australia, says Mark Parrington at ECMWF. “From satellite imagery there’s still thick smoke coming out of New South Wales, so more will be being pumped out, meaning a train of pollution going across the south Pacific, following the jet stream,” he says.

While it is relatively unusual for pollution to travel so far, studies have shown Australia’s deadly 2009 “Black Saturday” fires released materials that travelled a similar distance. Only trace amounts of Australian pollution hitting South America have been recorded today by satellites, with Parrington reporting carbon monoxide levels of 80 to 100 parts per billion. Anything above 110ppb is considered polluted air.

Reporters stationed across Queensland and New South Wales bring you the latest details around the ongoing bushfire crisis.