Two Russian Tu-160 Blackjack bombers touched down today at South African Air Force Base Waterkloof in the country’s capital Pretoria, marking the first time these bombers have made a visit to anywhere in Africa. This comes on the same day that Russian President Vladimir Putin opened the first-ever Russia Africa Summit in Sochi on the Black Sea and as the Kremlin has been working to expand its influence across the continent.

The SA authorities announced that the Russian Air Force would be sending the bombers on Oct. 21, 2019, and described the deployment as a military-to-military cooperation event. The Tu-160s were supposed to arrive yesterday, but experienced unspecified technical issues, which pushed their trip back a day. Bad weather further delayed when they would actually land at Waterkloof.

An An-124 cargo plane and an Il-62 passenger transport aircraft did make the trip as scheduled on Oct. 22, 2019, carrying supporting personnel and equipment. This is a typical support package for the Blackjacks that also accompanied a pair of bombers on a trip to Venezuela in December 2018.

I was just sent this incredible video of one of the Tu-160s landing at AFB Waterkloof, taken from right under the approach path. pic.twitter.com/uwDZhtjBWE 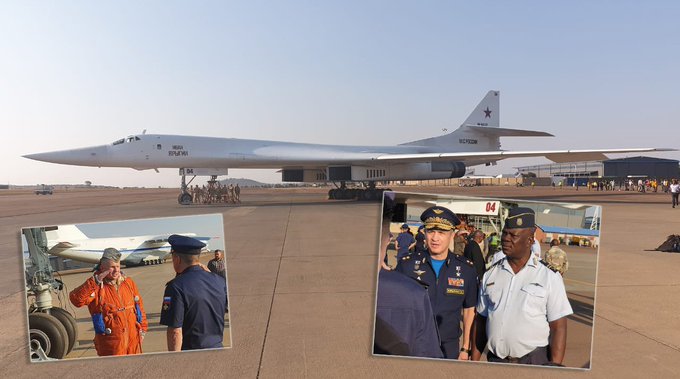 The planes covered over 11 thousand kilometers to reach South Africa, flying all the way from Russia without landing. The aircraft were refueled mid-air during the 13-hour flight.
https://www.rt.com/news/471663-russian-tu160-south-africa/

Russian President Vladimir Putin hosted dozens of leaders of African nations Wednesday at the first-ever Russia-Africa summit while a pair of nuclear-capable bombers made an unprecedented visit to the continent, reflecting Moscow’s new push for influence. Footage from Russia’s Defence Ministry showed two TU-160 strategic fighter planes taking off from an unknown location in Russia, and later landing at the Waterkloof airfield in South Africa.

The flight reportedly took more than 13 hours spanning over 11,000 kilometres (6,835 miles) and pilots had to refuel in the sky mid-journey.

The Defence Ministry said Russia will use the planes in joint military exercises with South African colleagues, describing the visit as a sign of “strategic partnership.” At a bilateral meeting with South African President Cyril Ramaphosa during the summit in Sochi, Putin said Moscow is looking to further expand trade with the country, one of the continent’s most developed economies.

Russia is also building on its status as Africa’s largest arms supplier, and has signed military cooperation agreements with at least 28 countries on the continent, the majority in the past five years. Officials have talked about the possibility for Russian warplanes and navy ships to use ports and air bases in some African countries.