Who are the Saami peoples.    The indigenous Saami peoples, these Northern old growth forests are essential to Saami reindeer herding, a traditional way of life that the Saami hope to continue into future generations.  The Saami are the indigenous people of Norway, Sweden, Finland and Russia

The Arctic Council is the leading intergovernmental forum promoting cooperation, coordination and interaction among the Arctic States, Arctic indigenous communities and other Arctic inhabitants on common Arctic issues, in particular on issues of sustainable development and environmental protection in the Arctic…

The Ottawa Declaration lists the following countries as Members of the Arctic Council: Canada, the Kingdom of Denmark, Finland, Iceland, Norway, the Russian Federation, Sweden and the United States.

They include: the Aleut International Association, the Arctic Athabaskan Council, Gwich’in Council International, the Inuit Circumpolar Council, Russian Association of Indigenous Peoples of the North and the Saami Council.

Sapmi – the land of the Sami

Made for the United Nations, this documentary chronicles the logging damage that has taken place in the forests of Finnish Lapland over the past 50 years. Home to the indigenous Saami peoples, these Northern old growth forests are essential to Saami reindeer herding, a traditional way of life that the Saami hope to continue into future generations.

A tense conflict emerges between the alliance of Greenpeace and Saami activists, who in 2005 set up a “Forest Rescue Station” in the woods to stop the cutting, and logging workers, worried about losing their jobs, who create their own “anti-terror camp” in response. The situation becomes dramatic as those in the “anti-terror” camp continually assault the Greenpeace workers with noise and threatening behavior.

Last Yoik in Saami Forests? implicates the state-owned logging company Metsahallitus  in the exploitation of Saami resources, and shows that the Finnish government has done little to preserve this natural resource. The film explores possible economic alternatives to logging, such as tourism, as well as more efficient uses for Lappish timber than paper pulp, fuel or railways stocks – the wood is an excellent building material that could be commanding a higher price. The issue of indigenous land rights is the heart of the problem, and as of the completion of this film in 2007, it remains unresolved. 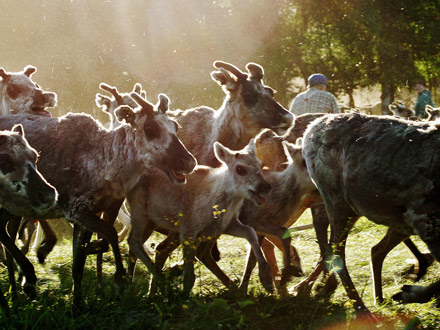 The standing Arctic Council Secretariat formally became operational in 2013 in Tromsø, Norway. It was established to provide administrative capacity, institutional memory, enhanced communication and outreach and general support to the activities of the Arctic Council.

2014 – A video interview with musician Mari Boine from the exhibition Sámi Stories: Art & Identity of an Arctic People, on view May 10 through August 23, 2014 at Scandinavia House: The Nordic Center in America.