Festung Königstein (Königstein Fortress) is a unique monument to the art of European fortress construction. Its 750 years’ history have made it an impressive con  figuration of late Gothic, Renaissance, Baroque and 19th century architecture.  Königstein castle is one of the largest mountain fortresses in Europe. 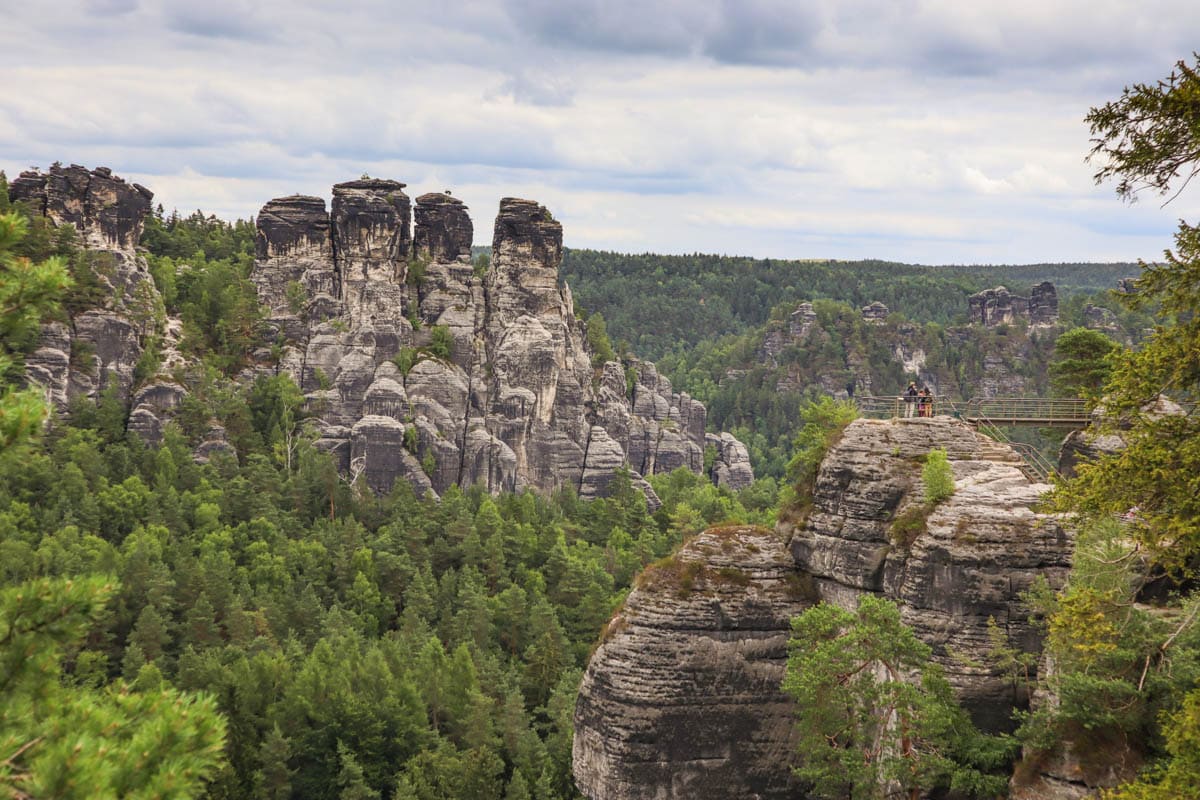 1241 – The first mention of the Königstein in a document; King Wenceslas I of Bohemia affixes his seal to the Upper Lausitz Border Decree “in lapide regis” (“on the stone of the King”, Königstein is the German for Kings stone); a medieval castle exists on the rocky plateau; it is the property of the Bohemian kingdom.
1233 – Probably the oldest written mention of a castle on Königstein mountain; a “Burgrave Gebhard vom Stein” is mentioned in a document of King Wenzel I from Bohemia; the medieval castle belonged to the Bohemian kingdom

The history of Königstein castle

Königstein castle is one of the largest mountain fortresses in Europe and is located in the Elbe Sandstone Mountains in Saxon Switzerland above the village of Königstein. It is perched on a 9.5 hectare plateau, 240 metres above the Elbe river.

People have lived here since the Bronze Age, 3100 years ago. The outer wall is 1,800 metres long and from the base it is up to 42 metres high using the sandstone cliffs as additional support. At the centre of the complex, there is a 152.5 meter well, the second deepest castle well in Europe. The fortress exists thanks to its environment.

The Elbe Sandstone Mountains were created due to the uplift of ocean floors in historic times which then due to weathering created the rock formations that we can see in the region today. It is the debris of a landscape which in millions of years time will no longer exist.

Part of that debris are the plateaux and the Königstein plateau is one of them. An ideal defensive position located above an important trade route and close to a border that has existed since the castle was first created.

There are a number of ways of getting here. One can take the Dresden S Bahn, get off at Königstein and walk. Alternatively there is a car park below the castle, one can walk from there or take the shuttle bus. If one comes by coach, there is a large coach stop at the base of the castle, one can pick up a ticket there and enter the castle either by panoramic lift or follow the trail.

*
The Bastei! These beautiful rock formations in Germany were formed by thousands of years of water erosion and used to be a functioning castle. A sandstone bridge from 1851 connects the rocks formations. Then it’s off to explore the stunning Königstein Fortress!

Hohensalzburg Fortress towers over the Salzach River, dominating Salzburg’s skyline as one of Europe’s mightiest castles. Through the forest, Mönchsberg Mountain offers commanding views and a respite from the city.

Fortress Hohensalzburg is a real eye-catcher, high above the Baroque towers of the city. The castle remains a visible landmark to this day and is an unmistakable feature of Salzburg’s world-famous skyline. From afar, the mighty walls begin to reveal the history visitors experience at first hand within these sturdy defenses.

Salzburg’s most important attraction is castle on the hill

Khertvisi fortress (Georgian: ხერთვისის ციხე) is one of the oldest fortresses in Georgia and was functional throughout the Georgian feudal period. It is situated in Southern Georgia, in Meskheti region. The fortress was first build in the 2nd century BC. The church was built in 985, and the present walls build in 1354.
As the legend says, Khertvisi was destroyed by Alexander the Great. In the 10th-11th centuries it was the center of Meskheti region. During the 12th century it became a town. In the 13th century Mongols destroyed it and until the 15th century it lost its power. In the 15th century it was owned by Meskheti landlords from Jakeli family. In the 16th century the southern region of Georgia was invaded by Turks. During next 300 years they have owned Khertvisi too.