Ghost orchids are found in Florida and Cuba, and there are only about 2,000 ghost orchids in the state. As few as 10 percent of them flower each year during an unpredictable window in the summer. The plant has no leaves, consisting of green roots that cling to the bark of several tree species. When they aren’t blooming, they look like unremarkable bits of green linguine, and are difficult to find. 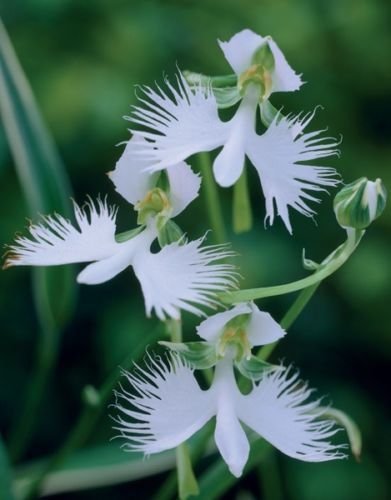 Photographs by Carlton Ward Jr. and Mac Stone show that a couple of moth species other than the giant sphinx visit and carry the ghost orchid’s pollen—and the giant sphinx itself may play a completely different role than previously thought.   These results provide insight into the plant’s virtually unknown reproductive biology, and they suggest that conserving the endangered species may be less difficult than assumed, since it’s not dependent on only one pollinator, says Houlihan, who collaborated with Ward and Stone to make the discovery. The findings also show the ghost orchids can be important food sources for moths.

But when Ward set up several remote camera traps in this wildlife refuge, he documented five species of moths visiting these ghost orchids. Two of these species, fig sphinx (Pachylia ficus) and pawpaw sphinx moths (Dolba hyloeus), had ghost orchid pollinia on their heads.

Stone and Houlihan worked out of Corkscrew Swamp Sanctuary, one of the world’s largest old-growth cypress forests, a 45-minute drive to the northwest.

The sanctuary, owned and operated by the National Audubon Society, has set up a scope for visitors to see a massive ghost orchid, known as the “super ghost.” This flower sits 50 feet up on a cypress, and it’s the only ghost that is relatively easy to see. The orchid currently has eight flowers, “which is just insane,” Stone says—most plants put out only one flower at a time.

In 2018, Stone (assisted by Houlihan) spent countless hours setting up a camera on this orchid, tree-climbing and tinkering.

The super ghost itself shows people that the flower is not an abstract concept—but a very real plant that depends on a healthy flow of water to survive, she says. The new discovery about the ghosts’ pollinators “speaks to the need for conserving places like Corkscrew so that we can continue to understand the complex ecology of the region,” Clem adds.

Cypress trees once covered much or most of southwestern Florida, and Corkscrew offers a glimpse of how the land once appeared. Many trees reach to heights of around a hundred feet, and some of them are about 600 years old.

The super ghost is by far the highest situated of its species, and one of only few known to occur in cypress trees. But Houlihan and Stone think that, once, it was probably a common scenario—and these highly perched plants were likely incredibly important for seeding the understory below.

“This is just one reason why these old-growth forests are so important,” Stone says.

The flower of the Holy Spirit (Peristeria elata) belongs to the family of orchids, it is a terrestrial plant or epiphyte, with fleshy leaves, native to Panama, where it is national flower and there is more known, and also found in some areas from Colombia and Ecuador.  This orchid is one of the most endangered flowers, because due to its great beauty, many wildlife traffickers collect it or collect it from its natural environment. It is included in the list of endangered plants according to the Washington Treaty.

Peristeria elata is a species of orchid occurring from Central America to Panamá, Venezuela and Ecuador. It is the type species of its genus. It is commonly referred to as the Holy Ghost orchid, dove orchid or flower of the Holy Spirit in English, and, as the flor del Espiritu Santo in Spanish.

This orchid, known as the “flower of the Holy Spirit” – which is characterized by having petals of an intense ivory color, adorned in the center of its lip with a well defined and delicate pigeon that blooms between July and October – is the national flower of Panama.3 It was declared as such on October 21, 1980 by the National Assembly of the Republic of Panama. It is a species of orchid whose petals are white and even ivory. There are those who say that its shape reminds them of a small dove. It is such a symbolic magnitude that every year during the month of September is held in the town of Herrera in the town of Las Minas an exhibition with his name the Expoferia del Espíritu Santo to pay homage, exhibit, contemplate and promote regional articles. 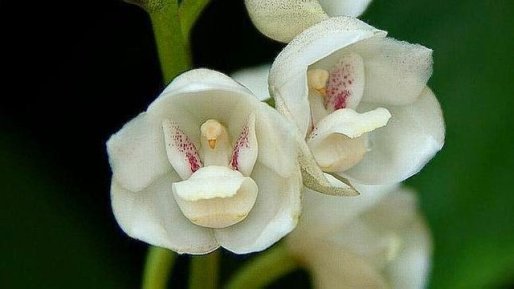 Due to its unique form and beauty, these orchids have become really endangered in nature, near extinction. That’s why it is highly recommended not buy this orchid from questionable sources because every cent in a poacher’s purse is a footstep to this beautiful orchid extinction. Peristeria elata is a large-sized, sympodial orchid with large round pseudobulbs. A mature plant could have pseudobulbs in size of a child’s head. It has up to three to five leaves per each pseudobulb, and its inflorescences are basal and up to 135 centimeters long. Her flowers are long-lasting, successively opened, two inches wide.

What’s about Dove orchid care? –  it is not very difficult. It is a hot to warm growing orchid, and it prefers bright, filtered light all year round. When new pseudobulb is actively growing, ample watering is demanded, so as balanced fertilizers for this large, fast-growing orchid – it is a heavy feeder. When active growth in length is slowing, you should reduce watering and fertilizers, because overwatering and excessive fertilizers are not very good in this period. Watering then should be at a minimum level, so if its pseudobulbs shiver a little it’s ok. It is also a good idea to slightly reduce a temperature, especially at night to promote flowering. Then, when flower spikes have emerged, you can slightly increase watering, but not too high. Peristerias prefer open, well-drained potting mixture with medium bark, cocoa chips, sphagnum moss and tree fern. So this orchid’s growing is quite simple, it is recommended not overwater it, especially if it is not in an active growth phase, and give it bright light and warmth.

One of Japan’s most famous orchids is the delicate terrestrial species, the egret flower, Habenaria radiata.  This plant’s flower indeed looks much like a snowy egret with its display plumage puffed out.  Despite being well known world wide, ironically this species is imperiled in the wild.  In addition, most growers find it a bit difficult to keep for more than a season or two, but that is mostly a problem with cultural requirements, as we shall see.

Habenaria radiata is a small terrestrial orchid of grassy wetlands and seepage slopes throughout Japan, the Korean Peninsula, and some parts of eastern China.

The lateral lobes of the lip give it the distinctive “egret flower” shape, while the petals, also pure white and lightly toothed, splay upwards, looking much like wings, and giving the flower an almost angelic appeal up close.  The column itself is interesting, a trident shaped affair, bright green, with two yellow, elongate pollinia at the front in full view, just waiting for a ride on a pollinator’s back or head.  If this weren’t remarkable enough, the flower also boasts a large nectary, or spur, green in color and extending up to 8 cm long in a graceful arc just below the lip.  Truly, this is a regal flower.

Habenaria radiata, the egret flower of the Far East

Habenaria radiata is in bloom. 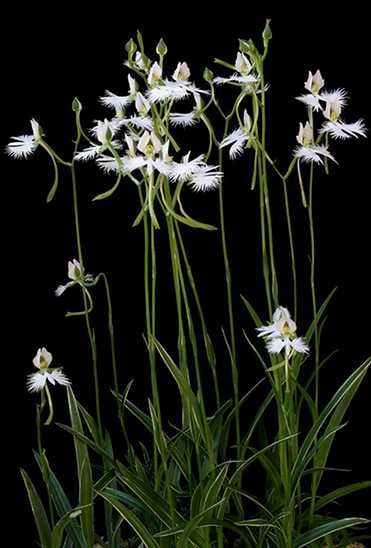