South Africa has temporarily shut down its embassy in Nigeria after a series of reprisal attacks on South African businesses there. Protesters gathered to voice their anger at foreign businesses being attacked in the South African cities of Johannesburg and Pretoria. South Africa’s President Cyril Ramaphosa says at least 10 people have been killed since Sunday, and has labelled the violence as “xenophobic”. South Africa has a large number of economic interests and businesses in Nigeria, many of which are now under police protection. Steven Gordon, a senior research specialist at Human Sciences Research Council in Durban, talks to Al Jazeera about the violence. 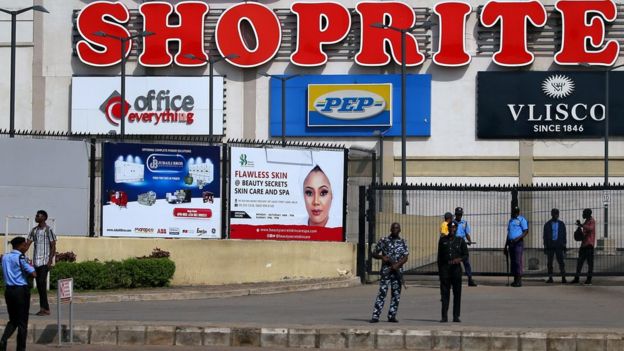 While the government believes Nigerian businesses have been targeted in South Africa, he added, it has no evidence that Nigerians have died.  Mr Onyeama also urged people to stop attacking South African businesses in Nigeria, saying that President Muhammadu Buhari was “particularly distraught at the acts of vandalism”.

What sparked the looting in South Africa?

The attacks on foreign-owned shops began after South African lorry drivers started a nationwide strike to protest against the employment of foreign drivers. They blocked roads and torched foreign-driven vehicles mainly in the coastal KwaZulu-Natal province.

It comes at a time of high unemployment and some South Africans blame foreigners for taking their jobs.

The unemployment rate in South Africa is nearly 28%, the highest since the labour force survey was introduced 11 years ago.

Despite disputing the accounts of Nigerians dying in South Africa, the Nigerian government has been forceful in its condemnation of events there.   On Wednesday, it announced it was boycotting the World Economic Forum on Africa that is currently taking place in Cape Town in protest at the violence.   “The government believes that we have to take the moral high ground on this matter,” Mr Onyeama said.

The president has also sent an envoy to South Africa to “express Nigeria’s displeasure over the treatment of her citizens”.   Nigerians often criticise the authorities for being slow to respond to domestic crises and the government is keen to be seen to be taking action over attacks in South Africa, said the BBC’s Nigeria correspondent, Mayeni Jones.

Between Sunday and Wednesday, mobs looted and destroyed shops, many of them foreign-owned, in South Africa’s commercial hub, Johannesburg.

Nigeria’s government has been outspoken in its condemnation of the violence.   Police say the unrest has subsided and more than 420 arrests have been made.

“Our government regrets all violence against foreign-owned stores or Africans from other countries who are resident in South Africa,” she was quoted as saying by national broadcaster SABC. 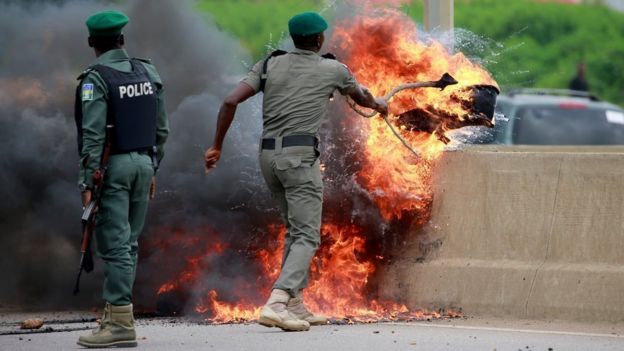 Air Tanzania, the country’s national carrier, has suspended flights to Johannesburg because of the violence, Transport Minister Isack Kamwelwe said.

Madagascar’s football federation has announced that it will not be sending a team to play South Africa in a friendly on Saturday because of security concerns.

The fixture against Madagascar was announced after Zambia pulled out of the match earlier this week over the xenophobic violence.

A group also marched on the South African high commission in the city and defaced the sign outside the compound.
*

Violence has erupted in Nigeria following the spate of xenophobic attakcs in South Africa. After Nigerians were among those attacked in Johannesburg and Pretoria in recent days, angry groups in the West African country have attacked South African businesses in response. Now some of those firms have closed their stores amid the violence.

Embassy shut down in Nigeria

Diplomatic tensions between South Africa and Nigeria are palpable. Our ministry of foreign affairs has revealed that South Africa’s embassies, in Abuja and Lagos, have been closed indefinitely due to fears of safety.

Why did South Africa close its embassies?

According to Department of International Relations and Cooperation (Dirco)    spokesperson, Lunga Ngqengelele, the decision to call for the closure of our embassies in Abuja and Lagos came after both offices received threats from Nigerian locals.

“After receiving reports and threats from some of the Nigerians we decided to temporarily close while we are assessing the situation,” he said.

At this point in time, Ngqengelele added, Dirco is not certain when the embassies will be reopened. For now, the safety of the employees is the priority.

“So we will be monitoring the situation and when [we] see it necessary to open, we will re-open. It was on that basis that we felt we need to protect the employees and shut it down,” he said.