Three people were arrested on Thursday after videos of toddlers at a West Rand crèche being slapped and hit, including at least one child with a broom, were shared on social media.   Parents were fuming after seeing what had allegedly happened to their children at the Myne Maatjies daycare centre.   Police spokesman Col Lungelo Dlamini confirmed to TimesLIVE on Thursday evening that three people had been arrested on allegations of assault.   This was after several statements were taken from parents and witnesses, Dlamini said. 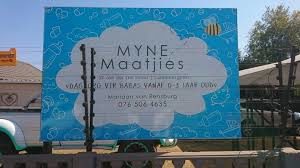 He said that investigations into the alleged abuse at the Myne Maatjies daycare centre started on Thursday.   “A hard drive has also been seized for further investigation. More info will be provided as the investigation develops,” he said.    TimesLIVE also confirmed that the department of social development in Gauteng was investigating.   Angry parents of toddlers at the crèche in Randfontein have removed their children from the centre after videos of alleged abuse surfaced.   A parent, whose name was removed to protect his child, said parents went to the daycare centre on Thursday morning to demand answers after seeing the videos of children allegedly being abused.

“The parents were bedonnerd [fuming] today and everyone is taking their children out of the school there. I am going to put my child in a different school.    “A lot of parents have complained to say that their children are very restless in the evenings and that they have nightmares,” the father told TimesLIVE.   In one of the videos, the kids are seen playing close to a jungle gym. A lady carrying a broom runs after one child and hits the child over the head. She walks away and continues sweeping the stoep.   In a second video, a woman is seen changing one of the children’s nappies. A crying child is seen in a feeding chair behind her. A second woman walks towards the child and appears to hit her several times.

She then lifts the crying child out of the feeding chair and walks away with her. It is unclear where they go or what happens next.   The parent said that his daughter, who is just over a year old, had came home with marks on her body before, but he thought it was just from playing with her friends at school. The father said his daughter has been at the crèche for about seven months.   He said the videos were recorded by the next door neighbour.

“When you drop your child at school in the mornings and she starts crying, it’s not a nice thing. But you just think she is being naughty. But now you can see what the bigger problem was,” he said.

The owner of the daycare centre released a video on social media on Thursday afternoon apologising to the parents. In the video she admits hitting a child on his hands.    “He is a very cute child, but he did scratch a little girl in her face. But I overreacted and something like this will never happen again.

“If it was my child I also would have been very, very angry,” she said.   She said workers who were involved in two other incidents at the creche fled before action could be taken.  “There will be disciplinary action and steps taken against them. Here … the children come first. Once again I just want to say I am truly sorry,” she said.

Gauteng social development MEC Thuliswa Khawe said she was shocked and angered after seeing the videos.   “Let me state this categorically: we condemn such cruelty against children. This is saddening because it cannot be justified.   “Let me add my voice to that of law enforcement and call upon anyone who may have any information about this incident to come forward. We cannot condone such actions,” she said.   Khawe said she and her team would be visiting the families to offer their support.   Police spokesperson Col Lungelo Dlamini said he had sent an investigating officer to the Randfontein police station to get details.

Tears of remorse, and an overwhelming sense that their many questions will remain unanswered. That’s how the parents of toddlers at a crèche in Randfontein, west of Johannesburg, described the way they felt on Friday.   For these parents, whose children who were allegedly slapped by their caretaker and other workers at the crèche, the damage has been done.   “How long has this been going on? My heart is in pieces,” a woman, whose name has been witheld to protect her children, told TimesLIVE on Friday. “You hear about these things on the news and people talk about these things, but you never think it could happen to your own children.”   The mother-of-two said her daughters attended the daycare – one, now five, since she was three months old.    Her second daughter, who is just over a year old, was seemingly assaulted in one of the videos shared online.  “No child deserves this. We don’t even hit our children at home. Who gives someone else the right to hit our children?”    The family paid just over R1,200 monthly to the crèche after receiving a discount for the two children, she said.   The daycare’s owner and two employees were detained for questioning on Thursday. Col Lungelo Dlamini confirmed that they were released soon after.   Dlamini said a hard drive had been seized to help the investigation.

On Friday morning, the gate at the creche lay broken in the driveway.   A neighbour told TimesLIVE it was “ripped from its railing” on Thursday evening.   “I just saw a bakkie pulling the gate from the railing. It was dark so I couldn’t see the number plate, but you could hear the little stones from the gravel hitting against the garage doors and windows. It must have been a very powerful bakkie to pull that gate over,” said the man, who asked not to be named.

A second mother told TimesLIVE that her one-year-old son joined the crèche in May last year after she had searched for the “perfect school for her baby boy”.   “Every parent just wants the best for their child and I felt that we made the right choice when we chose Myne Maatjies  because I knew a lot of parents whose children were also there,” she said.   The woman said her child would often cry when they dropped him in the mornings, but things got better after a while.

A few months later her child returned from daycare with marks on his face, but they decided not to question these, thinking “he is a boy and that’s how boys are”.  After it happened more frequently, her husband went to the school to find out what was happening.

The owner told the family there was a child at the school who was bullying their boy.   “The owner spoke to us nicely and we decided that we did not want to disrupt his life, so we left him there. She assured us that everything was under control.”   But, she said, her son would often return hungry and thirsty from daycare even though she had packed more than enough for him to drink and snack on.   It got worse when their child cried for hours after being fetched from school.

She said she had sent the owner pictures of his behaviour.    “He was just not the same boy anymore, but the owner told me it’s just a phase, I shouldn’t worry.   “I told his father that something was not right. It was so bad that I started reading books to try to figure out what the problem was.

“My child lost his joy for life. He didn’t want to eat or sleep and also didn’t sleep properly and cried a lot. He started hitting us, and now we understand why, because the minds of children record everything.”   The boy was removed from the school a few months ago and has since been looked after by his grandmother.   “I am sad, angry and scared. My trust in people will never be the same when it comes to my children.”

The father of a girl who is just over a year old said she had come home with marks on her body before, but he thought it was just from the rough and tumble with her friends. The girl has been at the crèche about seven months.   “When you drop your child in the morning and she starts crying, it’s not a nice thing but you think she is nust being naughty. But now you can see the real problem,” he said.

The owner and two employees of the Myne Maatjies day-care centre in Randfontein were released after being detained on Thursday..   “They will not be appearing in court as they were taken in for questioning and released,” police spokesperson Col Lungelo Dlamini said on Friday.   The three were arrested after videos of toddlers being “slapped” and “hit” with a broom were shared on social media.   Parents were fuming after seeing what had allegedly happened to their children and on Friday, the front gate to the creche lay damaged in the driveway.    In one of the videos, the children are seen playing close to a jungle gym. A woman carrying a broom runs after one child and purportedly hits the child over the head. She walks away and continues sweeping the stoop.   In a second video, a woman is seen changing a child’s nappy. A crying child is seen in a feeding chair behind her. A second woman walks towards the child and appears to hit her several times.  She then lifts the crying child out of the feeding chair and walks away with her. It is unclear where they go or what happens next.