2018  – There are dozens of videos on the Internet showing small, unmanned aircraft delivering medicine, packages, pizzas and tacos.   If you believe the hype, the skies may soon be crowded with these vehicles.    The Federal Aviation Administration took a big step toward defining this future by enacting the rules and regulations known as Part 107. 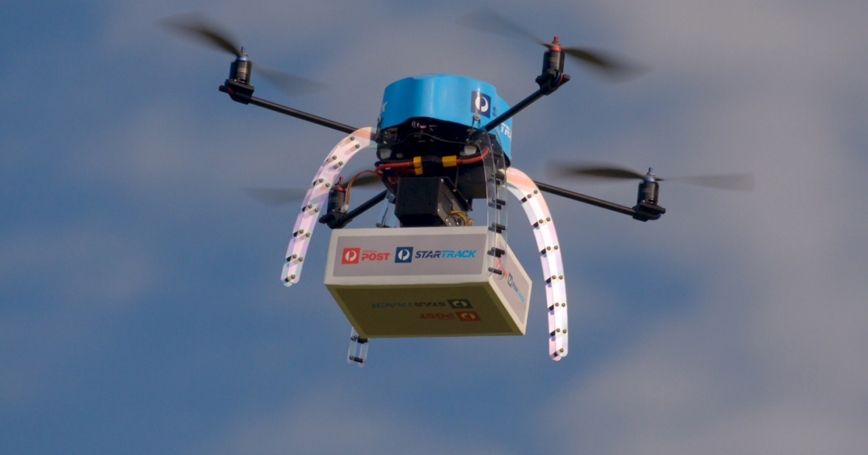 The federal government’s potential role in drone aviation shouldn’t stop with Part 107. Instead, the government should seek opportunities to partner with private firms to develop novel drone traffic management systems and to test drone designs.

Through involvement in these areas, the government could help stimulate the development of drone aviation, as it did with civil aviation via the Air Commerce Act of 1926, while also establishing a framework for the protection of the public’s safety, privacy, hearing and environment.

The need to manage drone traffic in the near future is less obvious than the need to manage conventional aircraft was previously. Sense-and-avoid systems for drones will be designed and programmed to minimize collisions.

There is now, or soon will be, a foundation for networked, tactical-level autonomy. In addition, drones will not need to share access to a small number of congested airports the way conventional aircraft do. There is a good chance that there will be less need for trajectory deconfliction.

Finally, drone crashes can cause significant damages, but these damages are unlikely to be equal to the damages caused by conventional aircraft crashes.

Yet there is still reason to manage drone traffic. A management system can issue alerts when drones fly through areas that they have not been authorized to fly through, when wind or weather leads to increased risk, when drones fly too close to other air traffic and so forth.

By dynamically defining areas where drone traffic will be restricted, such a system could minimize externality costs such as accident risk and noise pollution. A drone traffic management system would benefit both drone operators and society at large.

A flexible and largely automated system or a combination of similar smaller-scale systems makes sense here. Such a system should focus on the observation and strategic management of traffic flows rather than tactical-level control (i.e., instructing one aircraft to steer right and another to go left in order to avoid one another). The development of such a system can produce insights and tools that could also be helpful for conventional air traffic control.

NASA is working with industry partners on an Unmanned Aerial System Traffic Management project and, while this is a great start, further efforts like this are needed.

Given past struggles with air traffic control modernization efforts, an especially promising aspect of NASA’s activity in this area is the focus on partnership between the federal government and the private sector. Further efforts should be made to reach out to and involve industry.

The government issues Certificates of Airworthiness that grant owners of conventional aircraft permission to fly and indicate that aircraft are safe. Certification reduces the risk of midair collisions between aircraft and of ground impacts.

Part 107 regulations do not require drone operators to have airworthiness certification. The government and the aviation community don’t yet have the experience or data needed to set proper standards.

The monitoring of operations in special test sites and the establishment of new drone testing facilities will be helpful. Drone operators would likely be interested in information regarding drone performance.

Airworthiness standards for drones could incorporate novel elements such as requirements that drones have geofencing technologies that prohibit their use in dynamically defined areas. This will minimize risk, for example making sure drones don’t fly above large public gatherings or through areas where weather conditions are not safe.

RAND is undertaking a comprehensive study of delivery drone operations, including analyses of drone designs and of the energy use, emissions, consumer demand and privacy implications of such operations.

Many people are accustomed to thinking of the government as a barrier to innovation. However, by setting standards, promoting collaboration with and amongst the private sector and helping to develop innovative systems the government can foster commercial drone aviation.