Biologists have discovered evidence that carnivorous plants in Canada feast on young salamanders, in what is believed to be the first instance of vertebrate consumption by plants in North America.

In study published in the journal Ecology, a pair of biologists in the province of Ontario found that northern pitcher plants – also known as turtle socks – devour juvenile spotted salamanders.

M Alex Smith, a professor of biology at Guelph University first discovered a salamander in a pitcher plant accidentally: he was leading a group of university students on a field course in Ontario’s Algonquin Park. But the sighting of the small reptile in the plant felt like a “WTF moment”, Smith told the Guardian in an email.

After consulting with the park’s resident salamander expert, Patrick Moldowan, a PhD student at the University of Toronto, the two suspected Smith’s discovery might have been more than a chance sighting. After surveying pitcher plants in Algonquin, Moldowa found that 20% of plants had at least one juvenile spotted salamander in them. “The second WTF moment,” said Smith.

The pitcher plant is one of nearly 600 carnivorous plants found throughout the world. Inhabiting much of Canada and the eastern United States, the pitcher thrives in low-nutrient areas, such as bogs.

The plant is well known for its appetite of invertebrates, like spiders and other small insects – but the discovery of decomposing salamanders significantly expands the scope of what plants may be consuming – and raises numerous questions.

What makes the research especially tantalizing, said Smith, is that while the plants and salamanders are relatively common sightings in the park, researchers didn’t realize the deadly relationship between the two.

The remote Wildlife Research Station in Algonquin park – the province’s oldest protected area – has been active for the last 70 years.

The team is testing multiple hypotheses about what lures the young salamanders into the fatal grip of the pitcher plant. One suspicion is that the salamanders accidentally fall into the plants and drown. The plants might also have a digestive enzyme that speeds up the process: researchers observed it took less than two weeks for the salamanders to decompose.

“I hope and imagine that one day the general public’s interpretive pamphlet for the bog will one day say, “Stay on the board walk and watch your children – here be plants that eat vertebrates!!” said Smith.

Scientists at the University of Freiburg in Germany have for the first time characterised the snapping movement of this rare aquatic carnivorous plant, found in wetlands around the world. Aldrovanda vesiculosa snaps its “trap” shut 10 times faster than the much larger Venus flytrap, using a combination of hydraulics and the release of pre-stress to capture water fleas and possibly even tadpoles and small fish. 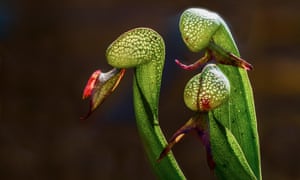 An example of a pitfall trap, or pitcher plant, this distinctive species, native to the western US and given its name because it resembles a striking cobra, traps insects in its tubular leaves, which can grow to nearly a metre in height. The prey is distracted by false exits – the real one is concealed – until it tires and falls into fluid at the bottom of the pitcher, where it is digested with the help of bacteria.

In the manner of flypaper, these diverse carnivorous plants, with nearly 200 species distributed across every continent except Antarctica, use sweet, sticky mucilage to lure and capture their prey. Rather than provide energy, the insects are used to supplement nutrients lacking in poor soil conditions. Trapped prey are engulfed in a web of the sticky glands and digested by enzymes.

Mosquito larvae, aquatic worms and tadpoles are among the victims of this genus, containing some 220 species of plants found in lakes, streams and waterlogged soils around the world. When prey brushes against trigger hairs, a trapdoor is activated and the prey is sucked into a hollow bladder, whereupon the door closes again – all within a few thousandths of a second.

Easy to enter but difficult to escape, due to spiralling arms with inward-pointing hairs, these plants of the genus Genlisea, found in Africa and South and Central America, are examples of so-called lobster-pot traps. The traps are underground and they draw the prey – usually minute microfauna – upwards into the body of the plant. Carnivory in corkscrew plants wasn’t proven until 1998.