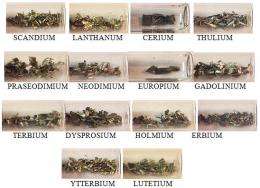 The government has prepared the steps it will take to use its stranglehold on the critical minerals in a targeted way to hurt the U.S. economy, the people said. The measures would likely focus on heavy rare earths, a sub-group of the materials where the U.S. is particularly reliant on China. The plan can be implemented as soon as the government decides to go ahead, they said, without giving further details.

The development follows a flurry of threats this week from state media and officials, highlighting the potential use of the strategic minerals as a trade weapon. China produces about 80% of the world’s rare earths, and an even higher proportion of the elements in their processed forms.

“Currently, it’s still just a possibility that China may ban or do some kind of restrictions,” Racket Hu, a researcher at Shanghai Metals Market, said in a Bloomberg TV interview. “But if it does happen, then we believe prices of rare earths will surge,” he said, citing what happened in 2010 when China curbed shipments to Japan.

Shares in rare earths companies rallied on Friday, with mainland-listed China Northern Rare Earth Group High-Tech Co. rising as much as 5.9% to the highest level in a year, while China Minmetals Rare Earth Co.’s stock gained as much as 4.4%. In Sydney, stock in Lynas Corp. took gains this month to 51%.

Heavy rare earths include dysprosium, used in magnets commonplace in almost all cars and many consumer goods. The group also has yttrium, used in lighting and flat screens, as well as ytterbium, which has applications in cancer treatments and earthquake monitoring.

Any action on rare earths would deepen a confrontation that’s roiling markets and damaging global growth. The effect of any restrictions would be significant, and clearly signal that trade tensions are escalating, according to a research note from Goldman Sachs Group Inc.

U.S. President Donald Trump’s threat to cut off the supply of chips and processors to Huawei Technologies Co. is hitting China’s biggest tech company where it hurts – its dependence on other nations for the semiconductors and software used in smartphones and networking gear. So when China’s President Xi Jinping showed up days later at a rare earths processing plant, many observers saw a message in the visit: the U.S. has its own tech vulnerabilities, too.

A group of 17 chemically related elements found in mineral form that have magnetic and optical properties useful for making electronics more efficient. Electric vehicle makers rely on them for lighter-weight battery and motor components. Neodymium and praseodymium combine to make powerful magnets used in aircraft, headphones and much more. Yttrium, a silvery metal, is used in cancer and rheumatoid arthritis drugs as well as color televisions and camera lenses. They’re also frequent components of everyday objects like light-emitting diodes, or LEDs, used to light up smartphones and stadium scoreboards.

China and parts of Southeast Asia dominate both the mining and processing of rare earths. China accounted for 71% of the rare earths mined globally in 2018, according to the U.S. Geological Survey. Australia and the U.S. were distant runners up, together producing less than a third of China’s 120,000 metric tons. The U.S. relied on China for about four of every five tons of rare-earth imports between 2014 and 2017 and in 2018 purchased $160 million-worth, up 17% from a year earlier. Outside of China, the world’s other large reserves of rare earths can be found in Brazil, Vietnam and Russia. A slump in prices in recent years has made opening up new sources unappealing.

Chinese state media warns the elements known as “rare earths” could be used as a weapon in the trade war with the U.S. Rare earths are a group of 17 elements that play a key role in the manufacturing of products including smartphones and missiles.

***
David Merriman, a rare earth expert and Manager of Battery & Electric Vehicle Materials at Roskill Consultancy, spoke about the impact if China restricts rare earths sales to the US.