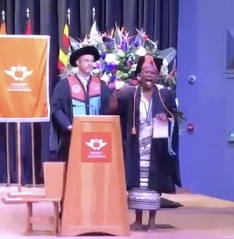 “I could not walk through that stage and pretend as if all was well. UJ has a tendency of using such ceremonies to portray this united front while it continues to exclude students and turns a blind eye against corruption,” he told TimesLIVE.

Goba said he had been suspended by the institution after he confronted an allegedly racist lecturer.

“All I did was ask Prof … why he was racist, and why he continues to be at the centre of unhappiness,” he said. TimesLIVE is aware of the identity of the professor but has chosen to not name him.

The university did not comment on Goba’s accusations. Instead, it accused him of using the ceremony as a platform to express his sentiments.

“The graduation ceremony is a prestigious event in the university’s calendar, as it acknowledges and celebrates the students’ achievements for their hard work over the years.

“It is unfortunate that one of the graduates opted to use the platform to express his sentiment,” said UJ spokesperson Herman Esterhuizen.     He said the university viewed Goba’s gesture as unfortunate and opportunistic.  “Instead of using the graduation as a celebration, the student resorted to grandstanding and playing to the gallery. The university condemns this type of behaviour in the strongest terms possible,” he said.

Following Goba’s utterances, the ceremony was temporarily disrupted and he was  removed from the premises by security guards.    “At first I was denied entry into the hall. When I expressed myself, I was once again forced out by several bouncers. What were bouncers doing at a graduation ceremony or even on campus? That should tell you a lot about the kind if institution UJ is,” said Goba.

The university said it was relieved the ceremony continued without further disruptions.  “The university is pleased that despite such unbecoming conduct that sought to dampen  the mood of the event, the graduation ceremony continued in a celebratory fashion with graduates, their parents and relatives enjoying the festivities of the day,” added Esterhuizen.    Goba said he did not regret his actions.    “I know how so many of our families struggle to make ends meet, for us to reach university. I am an activist and mine was to highlight that the struggle is real, while our forefathers fought for us to get this education, even with our generation, the struggle continues,” he said.