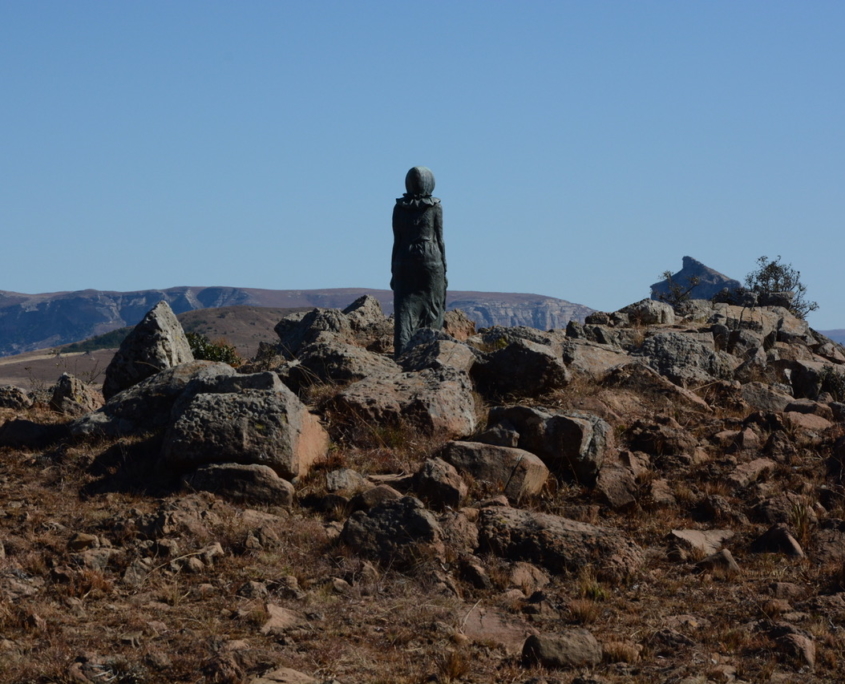 Here is a history lesson for those who want to know the truth about who’s LAND THIS IS?
FRONT NATIONAL
by D Lötter
May 2014

In the 3000 years since the end of the Stone Age, the indigenous people of Africa could not manage to create an infrastructure, could not mine or produce export, could, in fact not succeed in building anything higher than one storey and could not write down anything as reference for future generations, because they could not manage to master the art of writing. In fact, when the first Europeans arrived on 6 April 1652 it was 1974 years after Ptolemy I built the magnificent library of Alexandria – and in Southern Africa the indigenous people still could do no more than a few rock paintings and a clay pot with patterns on it.
Today, this development, this contribution of the descendants of Europe has become a threat to the Black South African. He cannot compare. He has no contribution that can remotely compare to what the white man created and therefore he has to fall back on what primal instinct tells him to do:

Destroy that which is a threat to you!

It is against this background that the white South African is demonised as a slaver and murderer who stole land. Let us put this in perspective:

In the first place:

The Europeans who came with Van Riebeeck had no intention to stay at the Cape. We can clearly determine this from the repeated application for transfer to Batavia or Amsterdam made by almost every Company servant. The few men who decided to make this their homeland, did so because they came to love the land.

They wanted to develop and grow here. And in the written evidence, left us by the men who did not intend to stay and therefore had no reason to lie, it is written down over and over again that the Europeans settled on uninhabited land. They exchanged land for cattle and money and traded with the nomadic indigenous people.

The Company decided to import slaves.    I emphasize import, because no indigenous person in this country was ever put into slavery! In actual fact, the slaves who were brought in from Madagascar and Batavia and Ceylon and East Africa were the ancestors of an entirely new group of people: the Coloured nation of South Africa who adopted the customs and culture of the European.

Ever wondered why they did not adopt the custom of Africa?

Because they were not exposed to it, that is why! Nobody at the Cape ever set eyes on a black person for 130 years before the first Trekboere met the Xhosa in the Valleys of the Amatola around 1770! These slaves also added to the bloodline of the European settlers, as did the French Hugenots of 1688 and the British Settlers of 1820. The White South African was a new nation, born in Africa. This nation called its language, Afrikaans, after Africa. This nation called itself after Africa – Afrikaners.

On the first of December 1834 slavery was abolished in the Cape Colony. This is two years before the start of the Great Trek. The white man in South Africa knew nothing of the existence of the Zulu, the Tswana, the Sotho, the Venda…and he was at war with the Xhosa. It is chronologically impossible that indigenous people could be held in slavery, if the so-called slave masters did not even know of their existence before the abolition of slavery.

Let us look at the “great” Shaka Zulu and the Zulu nation. Remember that the Europeans landed in South Africa in 1652. Shaka kaSenzaghakohona was born around 1787. He managed to unite, through force and murder and rampage a number of small tribes into the Zulu nation around 1819. Before that year, there WAS no Zulu people. A question of mathematics: The Zulu nation came into existence only 167 years after the arrival of Van Riebeeck. What logic can possibly argue that the Europeans took anything away from the Zulu-people?

So when did the black man establish himself in South Africa and how? The answer lies in the Mfecane: Mfecane (Zulu: [m̩fɛˈkǀaːne],[note 1] crushing), also known by the Sesotho name Difaqane (scattering, forced dispersal or forced migration[1]) or Lifaqane, was a period of widespread chaos and warfare among indigenous ethnic communities in southern Africa during the period between 1815 and about 1840.

As King Shaka created the militaristic Zulu Kingdom in the territory between the Tugela River and Pongola River, his forces caused a wave of warfare and disruption to sweep to other peoples. This was the prelude of the Mfecane, which spread from there. The movement of peoples caused many tribes to try to dominate those in new territories, leading to widespread warfare; consolidation of other groups, such as the Matabele, the Mfengu and the Makololo; and the creation of states such as the modern Lesotho.

Mfecane is used primarily to refer to the period when Mzilikazi, a king of the Matabele, dominated the Transvaal. During his reign, roughly from 1826 to 1836, he ordered widespread killings and devastation to remove all opposition. He reorganised the territory to establish the new Ndebele order. The death toll has never been satisfactorily determined, but the whole region became nearly depopulated. Normal estimates for the death toll range from 1 million to 2 million.

The black man established himself in this barren land now known as South Africa a full 174 years AFTER the white man. How dare you then call me a settler when you are nothing more? If I don’t belong here, certainly neither do you.

Land stolen from the black man? No.

The land occupied by the Boer-people was land that nobody lived on, for the pure and simple reason that the original people of South Africa were massacred and wiped out in a racist genocide by the ancestors of the current black population of South Africa.

The very same thing that is now repeated with the white man. The white man has a full and legal and historical claim to his part of this country, including land. And the black man who disputes that is welcome to bring evidence of the contrary. Remember, popular liberal myth, propagandistic expressions and loud shouting and burning and looting to hide your own incapability is not evidence. It is barbarism.

The popular myth of “the end of colonialism” is a lie also. Colonialism in South Africa ended on 31 May 1961 when the country became a Republic. White minority rule was not colonialism, because the white South African belongs here – you cannot colonise your own country.

The entire uproar about white oppression and white guilt and white debt is based, exactly like the concept of the rainbow nation and its Africa-democracy, on one big lie. In Afrikaans, a language of Africa, we say: However swiftly the lie might travel, truth will catch up one day.

Black South Africa might as well realise that the time of the lie is running out. Your stereotyping of the white man and apartheid as the cause of everything, cannot hold much longer.

You cannot hide rotting meat under gift wrap for eternity.

Some time in the very near future you will have to own up and explain how you could hold a small minority of oppressed people responsible for the disaster that you have made of a country which has the potential of being a place of safety, a welcome and hospitable home, to all its children whether they be black, white, coloured on Indian.