Both the F-15 and Su-35 carry long-range, radar-guided air-to-air missiles: the AIM-120D (160 kilometer range) and the K-77M (200 kilometers range). These missiles are basically in the same class—though the comparative effectiveness of their seekers has yet to be established—and would likely be fired under their maximum range when used against fighter-type aircraft to increase the likelihood of a kill. 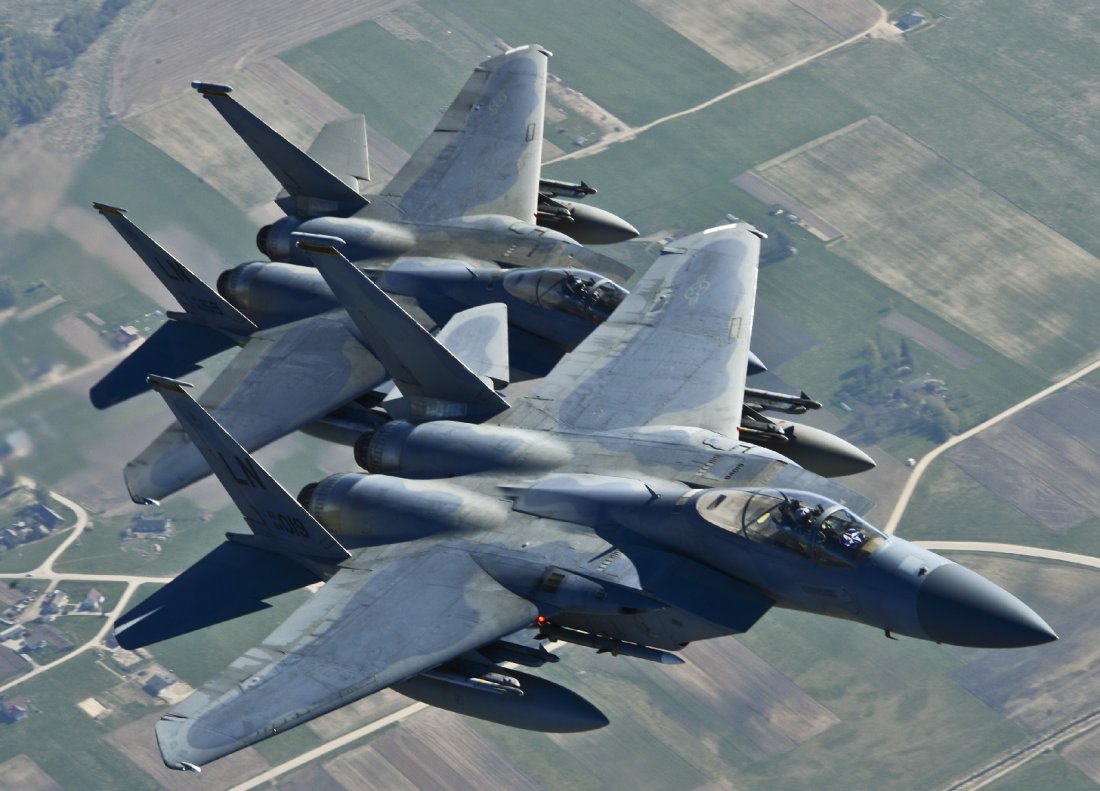 The former is the airplane that in many ways defined what a Fourth Generation fighter can do. Introduced in the 1970’s, it has been extensively updated to keep with the times—and hundreds will remain in service for decades to come.

The latter is an upgraded Su-27 Flanker—the Soviet-era counterpart to the F-15—now sporting modernized avionics and munitions, fancy vector-thrust engines and a fresh coat of radar-absorbent paint.

The Su-35S has a powerful Irbis-E passive electronically scanned array radar with a range of up to 400 kilometers; it is also effective against ground targets. However, the F-15’s APG-63 V3 Active Electronically Scanned Array radar is superior—harder to jam, higher resolution and harder to track.

The Su-35 boasts an infrared search and track system (IRST), which allows it to determine the general position of aircraft within a fifty kilometer radius—potentially quite useful for detecting stealth aircraft at shorter ranges. The F-15 doesn’t have an IRST.

However, a new add-on pod that is entering service, Talon HATE, will not only add an IRST to the F-15 but provide data fusion with other air and surface sensors, even allowing it to network with F-22 Raptor stealth fighters , which use a nonstandard datalink. Using this system, Raptors could fly ahead and identify hostile targets and send the targeting data to missile-firing F-15s a safer distance to the rear.

The F-15 wasn’t designed to be stealthy—and it isn’t, with an average radar cross section of five meters squared. The Su-35 has been designed for stealth, and reportedly can achieve a radar cross section ranging between one to three meters squared. So the Su-35 will show up on radars less quickly—but a radar cross-section of one meter squared can still be detected at fairly long ranges by good modern radars, and will not protect it from being targeted by long-range missiles.

The latest air to air missiles can be launched at targets well over 100 kilometers away. While the United States Air Force is convinced that beyond visual range (BVR) combat will dominate air warfare in the twenty-first century, with missiles fired over vast distances, the Russian aviation establishment is more skeptical. It holds that electronic counter measures and evasive maneuvers will lower the hit probability against maneuverable fighter aircraft considerably below the projected fifty to seventy percent hit rate. Russian aircraft are still designed to engage in BVR warfare, but with the belief that short-range combat is likely to ensue after BVR volleys are exchanged.

In terms of weapons load, the Su-35 has twelve or more hardpoints for carrying missiles compared to just eight on the F-15C. This is a clear advantage for the Su-35, which will likely fire multiple missiles at a time to increase hit probability; however, this edge may prove temporary. Boeing is offering to upgrade F-15s with quad-rail racks that will double the F-15’s loadout to sixteen. This would enable rear-deployed F-15s to serve as “missile boats” firing at targets painted by a vanguard of F-22 stealth fighters. For the time being, however, the F-15 is out-missiled.

Both the F-15 and Su-35 carry long-range, radar-guided air-to-air missiles: the AIM-120D (160 kilometer range) and the K-77M (200 kilometers range). These missiles are basically in the same class—though the comparative effectiveness of their seekers has yet to be established—and would likely be fired under their maximum range when used against fighter-type aircraft to increase the likelihood of a kill.

Another advantage of the Su-35 is its L175M Khibiny radar jamming system. While American AESA radars are believed to be resistant to jamming, the same is not believed to be true of the radars in AIM-120 missiles; the air-to-air missiles may have a high failure rate against aircraft protected by the Khibiny. In contrast, the Eagle’s Tactical Electronic Warfare Set countermeasure system dates back to the 1970s—a new system is being proposed as part of the Eagle 2040 upgrade package.

The Eagle is no slouch when it comes to maneuverability—in fact, it is one of the first designs to prove a heavy fighter could still pull off tight, energy-efficient turns and accelerate while climbing, thanks to low wing loading and high thrust-to-weight ratio.

However, the Su-35 is simply in a class of its own. It uses vector-thrust turbofans—which means its engine nozzles can move independently to allow it to perform tight turns and yaws and maintain high angles of attack (in which the plane’s nose is pointed in a different direction than the plane is moving) that ordinary aircraft can’t match. The Su-35 will reliably dance around an F-15 in a low-speed dogfight.

In terms of weapons, the F-15 and Su-35 are more evenly matched with their heat-seeking AIM-9X and R-73 missiles: both missile types can be fired “off-boresight” at targets outside the frontal cone of the aircraft via helmet-mounted sights. Such missiles are believed to have kill probabilities of seventy to eighty percent.

The deadly effectiveness of these short-range air-to-air missiles—and the fact that aircraft no longer need to be pointed at their adversaries to launch missiles at them—may actually diminish the benefits of superior maneuverability in future close-range encounters.

The Su-35S can carry over 17,000 pounds of munitions on its hardpoints, with up to 14 usable for air-to-ground attacks.

The F-15C can carry…none. Because it is purely an air superiority fighter. (To be fair, refitting for ground combat would not be an insurmountable task—Israel already refitted its Eagles in the 70s in this manner and used them destroy the Iraqi nuclear reactor at Osiriak.)

The F-15E Strike Eagle can carry 23,000 pounds of ordnance. The Strike Eagle can fly just as fast as the F-15C and carry the same air-to-air weapons, but it is somewhat less maneuverable and agile in Within Visual Range combat due to its heavier weight.

In other practical respects, the Russian military makes less use of precision-guided munitions than the United States, and uses a smaller range of types. However, the Su-35 is well equipped to employ them using the ground-attack mode of its Irbis-E radar.

The Su-35 appears to narrow the gap in this regard somewhat—it is supposed to last six thousand flight hours. The F-15C and E are rated to last eight thousand and sixteen thousand hours, and the former is likely to undergo a life-extension program. On the other hand, the Su-35s rolling off of factory production lines will be at the beginning of their service lives, while most F-15 airframes date back to the 1970s and 1980s.

The Next Generation F-15?

Boeing has marketed an advanced, stealthy version of the F-15, the Silent Eagle, for years—and it may finally have a found a customer in Israel . Recently, Boeing also began promoting an upgrade package for the F-15C, the Eagle 2040C, designed to keep the air-superiority version viable up to 2040.

Would Silent Eagles and Eagle 2040s redress the downsides of contemporary F-15s?

First of all, the Su-35’s advantage in maneuverability would remain unchallenged.  The Silent Eagle may boast a radar cross section as low as one-tenth of one meter squared from the front, ten times smaller than the Su-35. However, the rear and sides would remain unstealthy, though they would still have a decent stealth advantage on a head-on pass.

The Eagle 2040C package would also include IRST and F-22 datalink capacity via the Talon HATE pod, a new electronic countermeasure system, and a potential doubling of missile capacity.

Ultimately, future air-combat capabilities may be increasingly defined by the effectiveness of missiles and electronic counter measures rather than the aircraft carrying them, particularly in regards to non-stealth airframes.

Nonetheless, the Su-35 takes the crown of best dogfighter, and also remains a very capable and versatile missile platform against both air and ground targets, though it is held back by its lack of state-of-the-art AESA radar.

Current models of the F-15, however, remain capable air superiority fighters with advanced radar, while the F-15E can still carry greater weapons loads for ground attack. Upgraded F-15s would boast extraordinary air-to-air loads, and unparalleled data fusion with supporting ships, satellites and aircraft. The Silent Eagle might also bring an intriguing, though limited, frontal stealth capability to the table. Less than a hundred Su-35Ss are planned to serve in Russia, China, Malaysia and Algeria, though additional orders may ensue. A force of over 200 F-15Es and a smaller number of F-15Cs and Ds is expect for decades into the future of the United States, and well over 400 F-15s of various types currently serve in the Air Forces of Saudi Arabia, Israel, South Korea, Singapore and Japan.