The Eagle has landed – from Asia to America.     The   Steller’s sea eagles are native to China, Japan, North Korea, South Korea and eastern Russia, so this bird is at least 5,000 miles from home. But what’s even wilder, is that the same exact bird has been traveling across North America since at least August 2020.   Birders are sure it’s the same eagle because it has unique white markings on its wings. 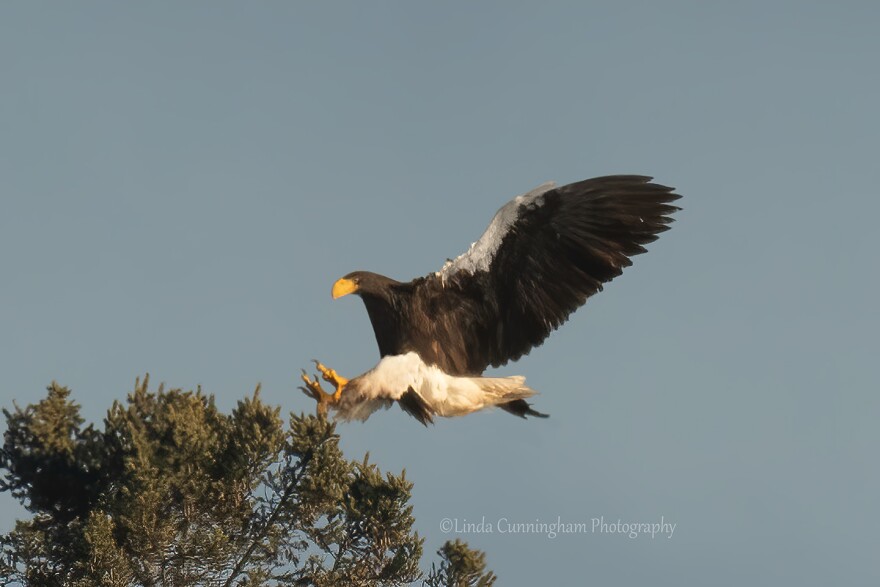 While it’s not entirely rare for birds to lose their way — a process called vagrancy — it’s still notable that this eagle was found in Massachusetts and all these other different regions of the United States and Canada. Scientists have been looking into how climate change impacts these vagrant birds and how they could possibly survive in new environments if they can’t find a way home.

Eagles on a seawall eat fish thrown from a sightseeing boat.

Bird expert Dan Gardoqui explains why the Steller’s Sea Eagle might be in Maine and where else it has been spotted this year in North America.

Bird lovers from Alaska to Nova Scotia are all aflutter about an Asian Steller’s sea eagle that has been spotted recently right here in New England.  The Asian Sea Eagle is native to China, Japan, Korea, and eastern Russia, so any spotting of one in New England is quite remarkable.

Steller’s sea eagles are some of the largest living eagles. Their wingspan may be wider than the average person is tall even while holding their hands above their head! These large raptors enjoy cold weather and spend most of their time in northern regions of the northern hemisphere along coastlines and river edges. They nest in sea cliffs or large trees and maintain a monogamous relationship with a single partner. There are believed to be about 5,000 Steller’s sea eagles alive today and their populations are in decline.

The Steller’s Sea Eagle is the heaviest eagle in the world, and one of the most visually striking. Japan’s north island of Hokkaido is the best place to view this magnificent raptor up close. The video concludes with a slide show of Dory’s photos