The Ever Given was freed after spending approximately six days stuck in the Suez Canal.     The Suez Canal Authority last week employed the Dutch dredging and heavylift company to assist.    A dredger known as a Mashhour and more than a dozen tugboats helped free the ship. 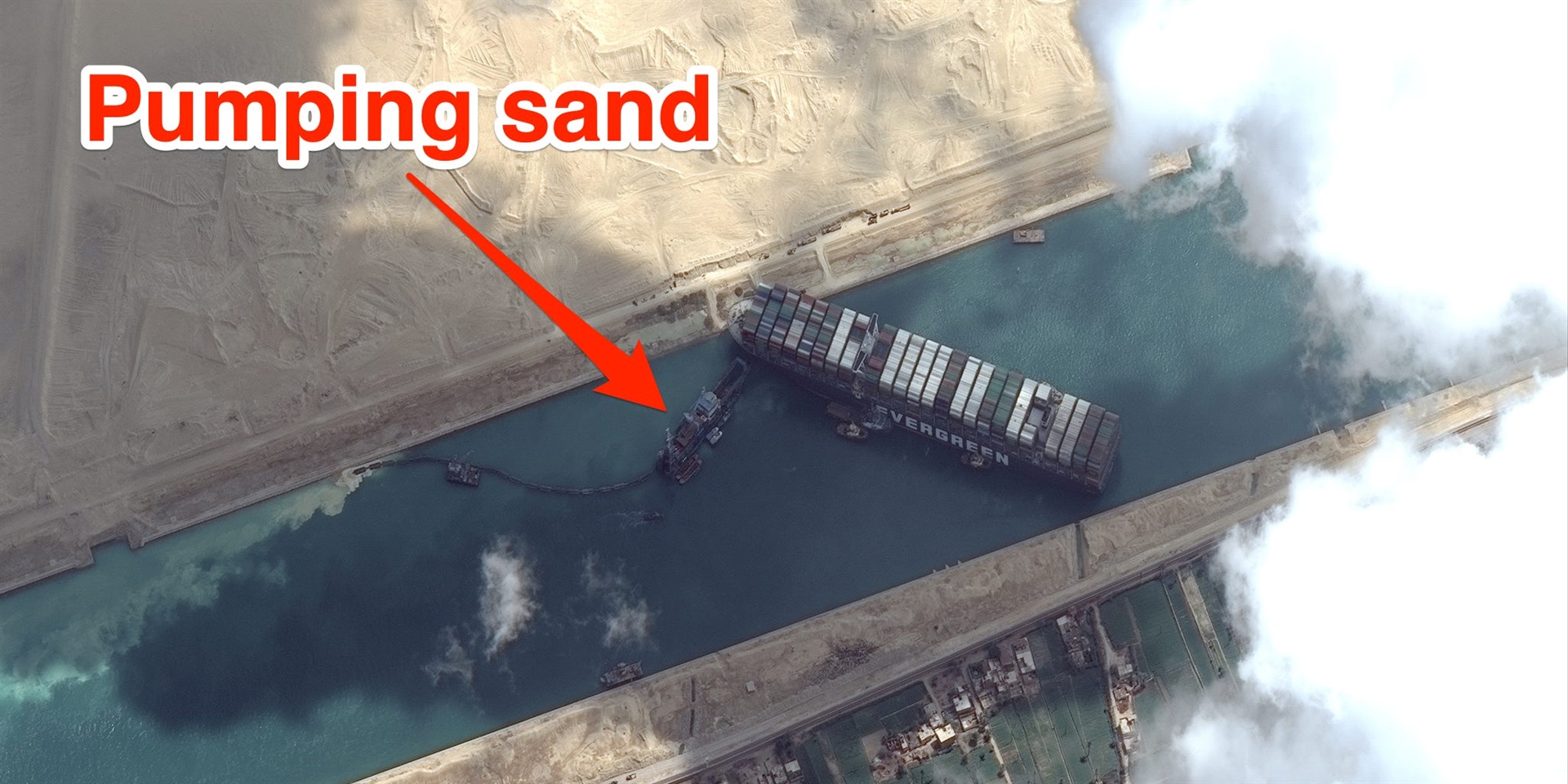 Was reported on 29 March 2021 that the Ever Given became lodged in the side of the Suez Canal last Tuesday. Officials suspect the ship became stuck due to high winds and a large dust storm.  A previous Insider report also revealed that the container ship was traveling nearly 5 knots faster than permitted in the canal, though experts explained that speeding up is a tactic used to better control a vessel during a wind storm.

As Insider previously reported, the ship, which weighs 220,000 tons, had been partially re-floated earlier Monday, around 04:00, after days of work by a dredging ship dubbed the Mashhour. The dredger, which was used beginning Thursday, is capable of moving 70,000 cubic feet of sand per hour, said Bernhard Schulte Shipmanagement, the technical manager of the Ever Given.

The constant dredging of sand using the Mashhour was vital in allowing tugboats to finally pull the ship free. In addition to the Mashour, smaller dredgers were also used to free the Ever Given. In total, some 30,000 cubic meters of sand and mud were removed from around the ship as workers worked round-the-clock to re-float it.

According to The New York Times, a full moon and resulting “king tide” on Sunday provided favourable conditions for the effort to re-float the Ever Given as it allowed for a few extra inches of tidal flow. Boskalis said it used two “powerful seagoing tugs” to finally free the ship. Those tugboats were used in addition to 11 tugboats used by the Suez Canal Authority.

Now that the vessel is freed, the more than 350 ships that were anchored in wait have already begun to move through the canal. According to the Journal of Commerce, a container shipping and trade publication, container shipping companies are in disagreement about the length of time it will take to clear the backlog of ships, estimating that it will take anywhere from 4 days to at least a week.

Maersk, the company whose “Maersk Denver” vessel was originally the first ship stuck behind the Ever Given and released one of the first photos of the stuck ship, said it directed 15 of its ships around Cape Town, a 15,000 mile detour. Hapag-Lloyd, another container shipping company, said it detoured six of its ships around Africa, as well, but had no more plans to reroute now that the shipping channels have been restored.

The Suez Canal may be cleared, but Maersk warned that the economic effects of the nearly week-long blockage may take months to resolve.

“Even when the canal gets reopened, the ripple effects on global capacity and equipment are significant and the blockage has already triggered a series of further disruptions and backlogs in global shipping that could take weeks, possibly months, to unravel,” the company said in a statement on Monday.

The Suez Canal blockage prevented an estimated $9.6 billion in trade every day, according to Lloyds List, or more than $50 billion after 6 days. Toilet paper, coffee, and furniture are among the industries most affected by the Ever Given. IKEA, an international furniture company, said it had more than 100 containers on board the Ever Given and expected supply chain delays from the crisis.

Nationalization of companies can have far-reaching consequences, both negative and positive, depending upon the motivations of the nationalizing entities and the impact on shareholders, taxpayers, and consumers. The Suez Canal, owned and operated for 87 years by the French and the British, was nationalized several times during its history—in 1875 and 1882 by Britain and in 1956 by Egypt, the last of which resulted in an invasion of the canal zone by Israel, France, and the United Kingdom to protect their interests, which included maintaining a passageway for the shipment of crude oil from the Persian Gulf. The Suez Canal remains emblematic of the geopolitical implications inherent in nationalization when it is exercised as a means of asserting national and geographic sovereignty.