The “legislation” is to regulate the holding of public gatherings and demonstrations at certain places; and to provide for matters connected therewith.
WHEREAS every person has the right to assemble with other persons and to express his views on any matter freely in public and to enjoy the protection of the State while doing so;
AND WHEREAS the exercise of such right shall take place peacefully and with due regard to the rights of others.
“demonstration” includes any demonstration by one or more persons, but not more than 15 persons, for or against any person, cause, action or failure to take action. 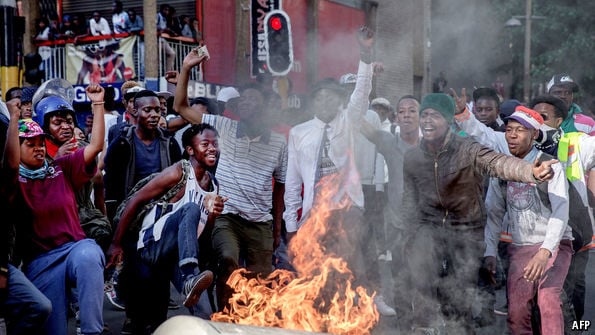 (5) No person present at or participating in a gathering or demonstration shall by way of a banner, placard, speech or singing or in any other manner incite hatred 15 of other persons or any group of other persons on account of differences in culture, race, sex, language or religion.

(6) No person present at or participating in a gathering or demonstration shall perform any act or utter any words which are calculated or likely to cause or encourage violence against any person or group of persons.

(7) No person shall at any gathering or demonstration wear a disguise or mask
or any other apparel or item which obscures his facial features and prevents his
identification.

(8) No person shall at any gathering or demonstration wear any form of apparel
that resembles any of the uniforms worn by members of the security forces, 25
including the Police and the South African Defence Force.

(ii) no entrance to a building or premises in or on which is situated any hospital, fire or ambulance station or any other emergency services, is barred by the participants. 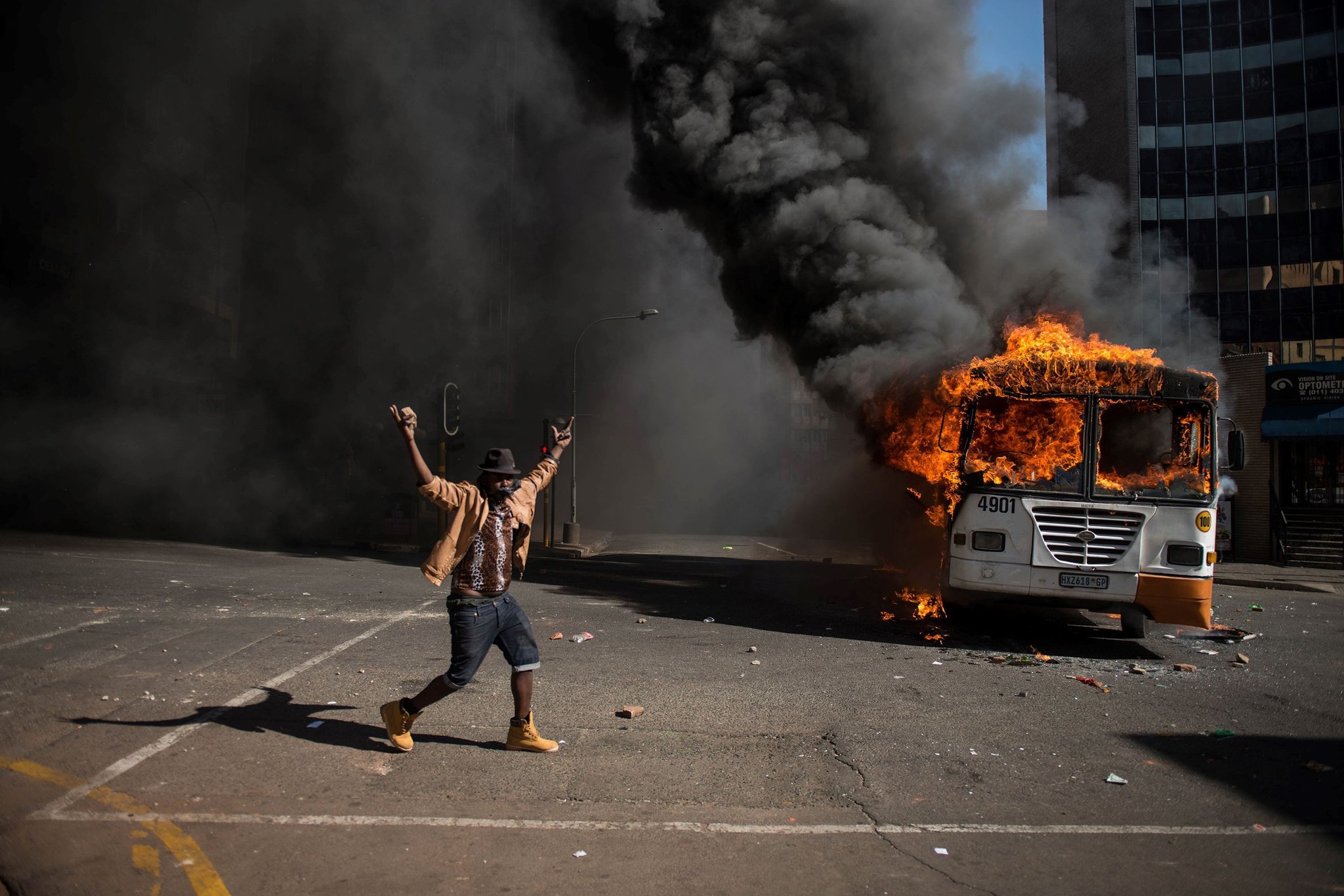 (iv) the prevention of injury to persons or damage to property;

(e) may, when an incident, whether or not it results from the gathering or demonstration, causes or may cause persons to gather at any public placenby notice in a manner contemplated in section 4(5)(a) specify an area considered by him to be necessary for-

(i) the movement and operation of emergency personnel and vehicles;  or·,
(ii) the passage of a gathering or demonstration; or
(iii) the movement of traffic; or
(iv) the exclusion of the public from the vicinity; or 15
(v) the protection of property;

(f) shall take such steps, including negotiations with the relevant persons, as
are in the circumstances reasonable and appropriate to protect persons
and property, whether or not they are participating in the gathering or
demonstration. Liability for damage arising from gatherings and demonstrations

(a) a gathering, every organization on behalf of or under the auspices of which that gathering was held, or, if not so held, the convener;

shall, subject to subsection (2), be jointly and severally liable for that riot damage
as a joint wrongdoer contemplated in Chapter II of the Apportionment of Damages Act, 1956 (Act No. 34 of 1956), together with any other person who unlawfully caused or contributed to such riot damage and any other organization or person who is liable therefor in terms of this subsection.

The Johannesburg Metro Police Department has urged motorists to avoid several roads in Sandton and be on the lookout for coal trucks blocking roads during the EFF’s protest action against Eskom on Friday.

On 19 November 2018 at 10h00, the Constitutional Court handed down judgment in an application for the confirmation of an order of constitutional invalidity made by the High Court of South Africa, Western Cape Division, Cape Town (High Court).  The High Court declared section 12(1)(a) of the Regulation of Gatherings Act 205 of 1993 (Act) unconstitutional and invalid.  This section makes it a criminal offence to convene an assembly of more than 15 people without first notifying the responsible officer of a municipality, even if such a gathering is peaceful and unarmed.

The applicants are members of the Social Justice Coalition, who on 11 September 2015 travelled as a group of 15 members to picket at the Cape Town Civic Centre to voice their dissatisfaction with inadequate sanitation facilities in Khayelitsha.  The picket was peaceful and unarmed, but grew in size at the venue as more people joined in.  The applicants were then arrested and charged for contravening section 12(1)(a) of the Act and charged with the offence of failing to give notice of an assembly in terms of section 12(1)(a).  In the Magistrate’s Court Bellville they were convicted as charged, cautioned and discharged.  The respondents are the state and the Minister of Police.

In a unanimous judgment penned by Petse AJ, the Constitutional Court confirmed the High Court’s declaration of invalidity.  It held that criminalising the failure by the convener of a gathering to give notice of an assembly of more than 15 people limits the right to assemble peacefully and unarmed, which is entrenched in section 17 of the Constitution.  This is because criminalisation deters the exercise of the right to assemble and deterrence by its very nature limits the exercise of this right.

Further, the Constitutional Court held that this limitation to the right to assemble is unjustifiable.  The right to assemble peacefully and unarmed is central to South Africa’s constitutional democracy.  The respondents submitted that the avowed purpose of criminalising the failure to give notice is to ensure that municipalities and the police can adequately prepare for large assemblies and in so doing reduce violence at protests.  While these purposes are important, the state, in responding to regrettable incidents at assemblies, cannot employ heavy-handed countermeasures that unduly limit the right to assemble peacefully and unarmed.  In this case, the limitation imposed by section 12(1)(a) has far-reaching consequences and is severe.  The definitions of “gatherings” and “conveners” are overly broad, so organisers of and participants in peaceful assemblies of more than 15 people could easily be criminalised for failing to give notice.  Further, the resort to criminalisation has a calamitous effect on those caught in its net through the imposition of a criminal record and exposure to the penal system.

In addition, the section does not distinguish between adult and minor conveners.  This has the potential effect of indiscriminately criminalising children who are more likely to exercise their right to assemble peacefully and unarmed without giving the required notice.  For children, who cannot vote, this right is a vital tool for their political participation.  There are also less restrictive means of incentivising conveners to give notice of large assemblies, such as civil liability and criminal prosecution of the participants in a gathering who, in the exercise of their right to assemble, contravene a host of other laws.

Consequently, the Constitutional Court confirmed the High Court’s declaration that section 12(1)(a) is unconstitutional in its entirety.  The criminalisation of convening gatherings without notice is unconstitutional – regardless of whether the subsequent gathering is violent.  The Court did not suspend the declaratory order because such an order does not result in a legal gap; there are multiple ways in which the Legislature could cure the unconstitutionality of the legislation; and the right to assemble will be undermined by suspending the declaration of invalidity.  The declaration of invalidity, however, shall not affect finalised criminal trials or those trials in relation to which review or appeal proceedings have been concluded.

The judgment of the Constitutional Court makes plain that the confirmation of the High Court’s declaration of constitutional invalidity must in no way be understood to imply that the right to assemble can be exercised otherwise than peacefully and unarmed.  People convening and participating in a gathering who intend to act violently forfeit their right.  However, so long as they act within the parameters prescribed in section 17 they will be assured of constitutional protection.

SAPS is headed by the National Commissioner appointed under the terms of the Constitution and the SAPS Act.    Under his direct supervision are four deputy national commissioners (within whose jurisdiction the different divisions and components of SAPS fall) and provincial commissioners.    One of the divisions within SAPS is the Operational Response Service, which includes five different units with specialized tasks: the Border Police, the SAPS Air Wing, the Special Task Force, Crime Combatting Units, and Intervention Units.     The equipment issued to Crime Combatting Units, which fight crime and engage in crowd management activities during protests, and the Special Task Force, a unit that deals with high-risk operations.

Weapons and equipment issued to members of the South African Police Service (SAPS) vary depending on the specialization of the police unit and the event in question.  For instance, members of crime combatting units, which engage in crime control duties and crowd management during demonstrations and protests, carry weapons and equipment commensurate with a specific task.  It appears that officers carrying out routine police duties carry pepper spray, a 9mm Z88/Beretta pistol, and an R5 assault rifle.

Officers assigned to crowd management duties during public gatherings and protests are issued body armor, armored vehicles, stun grenades, shotguns, and rubber rounds.  Members of the Special Task Force, a unit tasked with engaging in high-risk operations, have in their arsenal a wide range of equipment and weapons, including different types of small arms, assault rifles, sniper rifles, grenade launchers, and armored vehicles.

A number of statutes and police regulations govern questions of use of force and weapons.  All laws place great emphasis on the use of the minimum amount of force necessary to deal with incidents, and permit the use of deadly force only in limited, dangerous situations.

The deaths of individuals as a result of police shootings and the incidence of deaths of police officers in the line of duty remain consistently high.  In the two years from 2008/09 to 2009/10, 1,092 people were killed as the result of use of force by the police.  During that same period 216 members of the South African Police Service were killed in the line of duty.  In addition, there have been widespread controversies regarding police misconduct seemingly exacerbated by the surfacing of videos showing members of the SAPS using force against detainees.