From the Chicago Tribune – “Today we will make history,” Pelosi said as she signed the documents, using multiple pens to hand out and mark the moment. “This president will be held accountable.”   Moments later the prosecutors walked solemnly through the stately hall, filing into the Senate back row as the Clerk of the House announced the arrival: “The House has passed House Resolution 798, a resolution appointing and authorizing managers of the impeachment trail of Donald John Trump, President of United States.”    Technically, the House was simply notifying the Senate of its delivery of the articles, with a more formal presentation Thursday. Opening arguments are to begin next Tuesday after the Martin Luther King Jr. holiday. 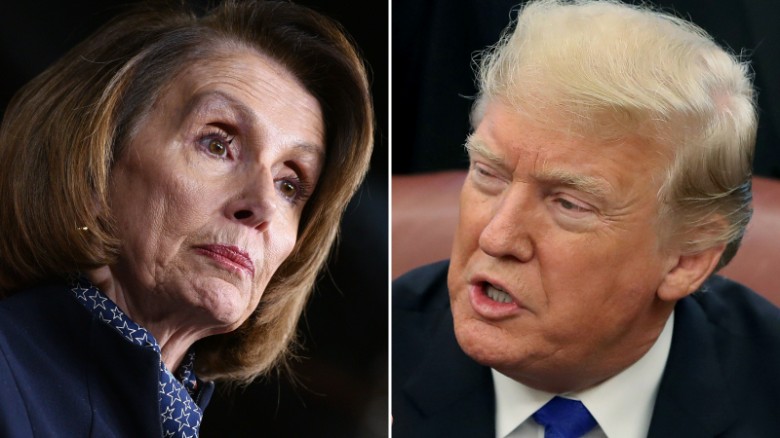 “This is what an impeachment is about,″ Pelosi said before the vote. “The president violated his oath of office, undermined our national security, jeopardized the integrity of our elections.”    Earlier Wednesday, the House voted 228-193, almost entirely along party lines to deliver the charges. The split reflected the deeply divided nation at the start of this presidential election year. It came one month after the House impeached Trump alleging he abused his presidential power by pressuring Ukraine to investigate Democratic rival Joe Biden, using military aid to the country as leverage. Trump was also charged with obstructing Congress’ ensuing probe.

The seven-member prosecution team was led by the chairmen of the House impeachment proceedings, Reps. Adam Schiff of the Intelligence Committee and Jerry Nadler of the Judiciary Committee, two of Pelosi’s top lieutenants.

BBC reported that the 100 lawmakers of the US Senate were sworn in on 16 January 2020 as jurors for the impending impeachment trial of President Donald Trump.   Chief Justice of the Supreme Court John Roberts administered the oath to the senators to “do impartial justice”.   In the coming weeks, the senators will decide whether Mr Trump should be removed from office over charges brought by the House of Representatives.     The trial is scheduled to begin on 21 January.    Mr Trump is accused of abuse of power and obstruction of Congress. He has denied wrongdoing and branded the case against him as a “hoax”.

Chuck Schumer, the Democratic leader in the senate, again called for new witnesses and documents to be permitted in the trial. “The gravity of these charges is self-evident. The House of Representatives have accused the president of trying to shake down a foreign leader for personal gain,” Mr Schumer said.    Senator Susan Collins, a Maine Republican who is facing a tough re-election bid this year, was seen wiping away tears from her face as the charges were read.

Justice Roberts asked the senators, “Do you solemnly swear that in all things appertaining to the trial of the impeachment of Donald John Trump, President of the United States, now pending, you will do impartial justice according to the Constitution and the laws, so help you God?”

In the lead-up to the trial, senior Democrats heavily criticised Mr McConnell after he pledged to work in “total co-ordination” with the president – seemingly abrogating the sworn duty of Republican senators to act as impartial jurors.    He has not ruled out witnesses. He suggested the format would mimic the impeachment trial of President Bill Clinton in 1999, during which senators voted on which witnesses to call following opening arguments and a written question period.

Mr Schumer told reporters after the proceedings: “McConnell said he’s going to take his cues from the president. We are taking our cues from nobody.”     He expected a vote next week on whether witnesses will be called. He said he had not seen the resolution put together by the Republican leader regarding the rules of the trial.

As things wrapped up on Capitol Hill on Thursday, Mr Trump told reporters in the White House he thought the trial “should go very quickly”.   “It’s a complete hoax,” the president said. “A phony hoax put through by the Democrats so they can win an election.” He reiterated the sentiment in a tweet, saying he was impeached “for making a perfect phone call”.

Democrats allege the president withheld $391m (£299m) in military aid in order to pressure Ukraine to investigate his political rival, Joe Biden. Mr Trump is the third US president to be impeached. The previous two – Andrew Johnson and Bill Clinton – were not removed from office.

A two-thirds majority in the Senate is required to oust a president. As Mr Trump’s Republicans control the senate, he is widely expected to be acquitted. His defence team has not been formally announced, but White House lawyers Pat Cipollone and Jay Sekulow have been tipped to lead it.

The House voted on Wednesday to send the articles of impeachment to the Senate, with the 228-193 vote split mostly along party lines.

The trial is likely to still be under way next month when Iowa and New Hampshire hold the first party votes to pick the eventual Democratic presidential candidate who will take on President Trump in November’s election. Three of the candidates – Bernie Sanders, Elizabeth Warren and Amy Klobuchar – are US senators and will have to drastically scale down campaigning to attend the trial.

Two other leading contenders, Joe Biden and Pete Buttigieg, plan to capitalise on their rivals’ diversion by blitzing Iowa in the last few days before the crucial 3 February vote in that state.

The House speaker, Nancy Pelosi, revealed the team that will prosecute Donald Trump in an impeachment trial to get under way in earnest in the Senate.     The team will be led by Adam Schiff, the intelligence committee chairman who took the lead in gathering evidence against Trump, and Jerry Nadler, chair of the judiciary committee.

“The president and the senators will be held accountable,” Pelosi said in a statement. “The American people deserve the truth, and the constitution demands a trial.” Trump is only the third president to face an impeachment trial in the Senate.

Pelosi said, “Trump tried to use the appropriations process as his private ATM machine, in order to advance his personal and political advantage. That is what the senators should be looking into … They shouldn’t be frivolous with the constitution of the United States, even though the president himself has.”

Trump is charged with using the power of his office to pressure Volodymyr Zelenskiy, the Ukrainian president, to announce a false investigation into former vice-president Joe Biden in an effort to damage his political rival.
*

“President Trump has done nothing wrong,” the White House said in a statement. “He looks forward to having the due process rights in the Senate that Speaker Pelosi and House Democrats denied to him, and expects to be fully exonerated.”

The #LevParnas trash is a part of a coordinated lies of liberals to try and overthrow this Administration.#God will thwart the plans of the evil spiritual forces behind the #impeachment of President @realDonaldTrump🇺🇸

How can we trust anything in the House Democrats’ impeachment* report?

Their lead investigator, Adam Schiff, fabricated a conversation between President Trump and the Ukrainian president. https://t.co/YUFFP9kRLu

Cry Harder you Russian Asset. #MoscowMarsha just to be clear, Putin’s buddy, Donnie J Trump is impeached. History will forever record him as the 3rd President to be impeached. No * needed. pic.twitter.com/sjUQc01kan

President Donald Trump is just the third U.S. president to ever be impeached. House Speaker Nancy Pelosi has selected seven House Democrats, who will be presenting the case in front of the Senate during the trial. These members are officially going to be known as impeachment managers.

*
”
“Abuse of Power”
“Obstruction of the Congress”

US President Donald Trump has hit back at the US Congress branding the formal impeachment charges as a “complete hoax”.

It was reported that the impeachment inquiry into President Trump turned its spotlight on 4 November 2019 on four top White House officials, asking them to testify behind closed doors as Democrats probe whether Trump held up military aid as leverage to get Ukraine to investigate his political rivals.
Trump – “impeachment inquiry”