The koala was sculptured using a fibreglass matting which was placed over the steel frame, then cold casting of bronze, consisting of 85-90% bronze, as well as fibreglass was then plastered on to the matting. In construction of the koala, the head and shoulders totaling 6 metres was built on the ground and then hoisted up with a crane and placed on the completed body. The structure is 14 metres high and 7 metres wide and took over 12 tonnes of materials to complete. It is the equivalent to a 4 story building. It really does have to be seen to be believed! 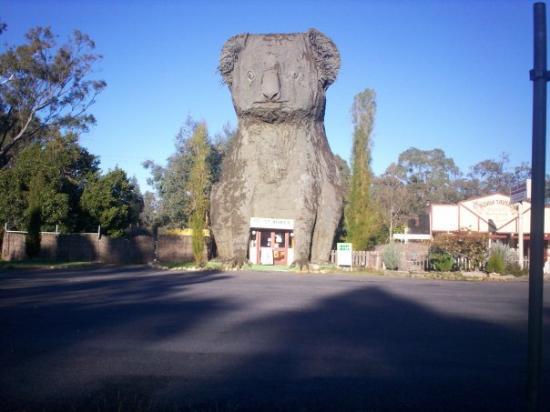 From afar, this lumpy cliff band seems to be a Legoland of blocky ledges and lichen-covered faces. But up close, a complex network of towers, gullies, and open faces reveals bomber rock and juggy holds—both Aussies and international climbers alike have called Mt. Arapiles “the best cliff in the world.” And although it’s home to the world’s first 5.14, Punks in the Gym, the area is most celebrated for its volumes of classic traditional routes under 5.10, with dependable jugs and—usually—solid protection.

The view from atop Araps’ vertical cliffs encompasses fields of bright yellow canola and unique wildlife. The famed kookaburra can often be found in the area’s old gum (eucalyptus) trees, along with other exotic, brightly painted birds, and kangaroos and wallabies are always up for a photo op during the early mornings and late afternoons.

Agamemnon (5.5, 2 pitches), The Atridae. It’s hard to find more excitement at such a low grade. Face climbing in the depths of a narrow chimney eventually leads to the airy crux of stepping across the dark chasm and stemming your way to the top. Regardless of how hard you climb, this chimney fiesta will surely be at the top of your tick list.

Horn Piece (5.6), The Organ Pipes. Located in the very popular Organ Pipes area, with an approach of less than five minutes, this is the perfect spot for a quick late-afternoon send. With a plethora of moderate classics as neighbors, Horn Piece stands out with its sustained arête, providing exposure you didn’t think was possible in a 90-foot pitch.

This is a nice section of the Wimmera River near Riverside (Horsham, Vic).