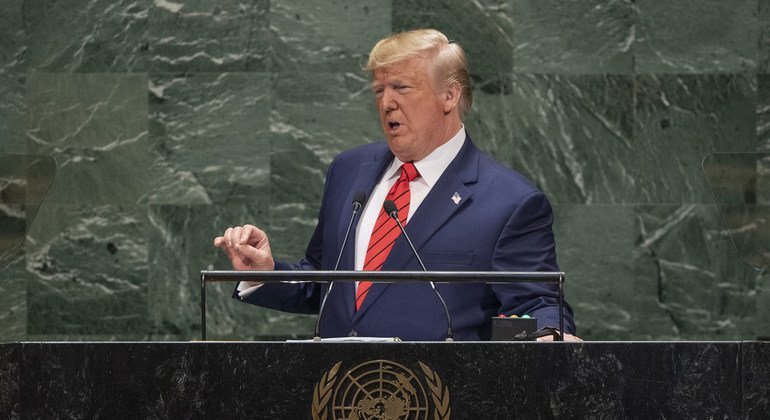 He drove a fine definition of nationalism in the American sense, not other countries, as a positive thing that benefits not just the U.S., but all nations.  And he exuded pride in the success the U.S. has seen as a result of recognizing this very reality:

If you want freedom, take pride in your country. If you want democracy, hold onto your sovereignty. And if you want peace, love your nation. Wise leaders always put the good of their own people and their own country first.

It is why we in the United States have embarked on an exciting program of national renewal. In everything we do, we are focused on empowering the dreams and aspirations of our citizens. Thanks to our pro-growth economic policies, our domestic unemployment rate reached its lowest level in over half a century.

Fueled by massive tax cuts and regulations cuts, jobs are being produced at a historic rate. Six million Americans have been added to the employment rolls in under three years. Last month, African-American, Hispanic American, and Asian American unemployment reached their lowest rates ever recorded.

We are marshaling our nations vast energy abundance and the United States is now the number one producer of oil and natural gas anywhere in the world. Wages are rising, incomes are soaring, and 2.5 million Americans have been lifted out of poverty in less than three years.

As we rebuild the unrivaled might of the American military, we are also revitalizing our alliances by making it very clear that all of our partners are expected to pay their fair share of the tremendous defense burden which the United States has borne in the past. At the center of our vision for national renewal is an ambitious campaign to reform international trade.

He returned to the subject with a rousing conclusion, too:

Love of our nations makes the world better for all nations. So, to all the leaders here today, join us in the most fulfilling mission a person could have. The most profound contribution anyone can make — lift up your nations, cherish your culture, honor your histories, treasure your citizens. Make your countries strong and prosperous and righteous. Honor the dignity of your people and nothing will be outside of your reach.

When our nations are greater the future will be brighter, our people be happier and our partnerships will be stronger. With God’s help, together we will cast off the enemies of liberty and overcome the oppressors of dignity. We will set new standards of living and reach new heights of human achievement. We will rediscover all truths, unravel all mysteries and make thrilling new breakthroughs. And we will find more beautiful friendship and more harmony among nations than ever before.

So much for Trump being a Nazi for being a nationalist, as the Left claims.  This isn’t Nazi talk.

Trump also summed up perfectly the problems that globalism has morphed into, including the problem of open borders, perfectly cutting through the kultursmog promoted by the left — exposing them as the real anti-humanitarians:

“Today, I have a message for those open border activists who cloak themselves in the rhetoric of social justice: Your policies are not just, your policies are cruel and evil,” he said, accusing them of promoting human smuggling and the “erasure of national borders.”

You are empowering criminal organizations that prey on innocent men, women and children. You put your own false sense of virtue before the lives and well-being of countless innocent people,” he said. “When you undermine border security, you are undermining human rights and human dignity.”

He also blasted socialism as a real problem in itself, something no world leader has ever done, but all the world’s victims of socialism had to be cheering about.  Trump broke that barrier.

Today I repeat a message for the world that I have delivered at home. America will never be a socialist country. In the last century, socialism and communism killed 100 million people.

It not only put its finger on the world’s primary problem, it was also a beautiful speech. Trump described how nationalism isn’t a hateful sort of thing – it was precisely this appreciation for nationalism that enables citizens to appreciate one another’s differences. Trump had lovely words in it for all cultures, and praised many nations, it wasn’t the rah-rah me-alone sort of speech. It was nationalism with a friendly hand out, calling for common ground, because, left unsaid, there is common ground as nation after nation elsewhere comes to embrace their own versions of Trump, too.

He also did something unprecedented for any president – he brought up the need for human rights for gay people, women, and unborn babies, a human rights manifesto if there ever was one. Zero apologies, and not even the left has tried this.

But rest assured, the groundbreaking speech got overshadowed, first by the press’s own efforts and then by the shenanigans in Congress over impeachment.

“Too often people in power preach diversity, while shunning or silencing the faithful,” Trump said. “True tolerance means respecting the rights of all people to express their deeply held religious beliefs.” While Trump did not specifically call out individual nations, Vice President Pence — who spoke before the president — criticized several countries for attacks on religious freedom, including China’s persecution of ethnic Uyghur Muslims, Venezuela’s contested leader Nicolás Maduro’s anti-Semitic rhetoric and Iran’s oppression of Christians, Jews and Sunni Muslims. Trump — who was joined on stage by Pence, U.N. Secretary-General António Guterres, Secretary of State Mike Pompeo and other world leaders — also announced that his administration was allocating an additional $25 million to protect religious freedom as well as religious sites and relics, and launching an initiative with business leaders to protect religious freedom in the workplace. “This institution will engage the private sector to protect people of all faiths in the workplace,” he said.