The spate of attacks on trucks on some roads around the country is “economic sabotage” perpetrated by criminal elements and steps are being taken to counter the problem, the relevant ministers said on Sunday.   The road freight and logistics sector truck drivers associations had distanced themselves from the planned strike on September 1 and 2.

The meeting was held to receive a report on the progress made to address the continued violence in the sector as well as plotting a way forward, the statement said.

The ministers condemned the ongoing violence and agreed that it was “nothing but economic sabotage threatening the economic viability” of the Southern African Development Community (SADC) region.

The meeting emphasised that the acts of sabotage were “spearheaded by criminal elements that are responsible for the blockages, burning of trucks and assets, as well as the intimidation and killing of truck drivers in the sector”.

The outcome of the discussions included:

– Law enforcement would ensure that the authority of the state was not undermined and increase visibility in violent hot spots;

– The Ministers agreed that through the department of international relations and cooperation, regional counterparts should be engaged to address this matter;

– There would be continuous joint inspections taking place in all provinces to ensure compliance in the sector; and

– The task team had agreed to develop a clear action plan and provide regular updates on the progress made to the joint inter-ministerial task team.

“The meeting further noted that the events are turning more violent and criminal; the South African Police Service will continue to act against any acts of lawlessness. It is important to note that South Africa is not a xenophobic country and whoever is found on the wrong side of the law will be dealt with,” the statement said.

The burning of trucks along the N3 near Ashburton on Sunday.    Kaunda called on police to act swiftly and find the suspects involved.   The north and south-bound lanes were closed on the N3 near Ashburton as emergency services cleared the road.   “Government has embarked on a process to address the challenges facing truck drivers,” the transport department said in a statement. 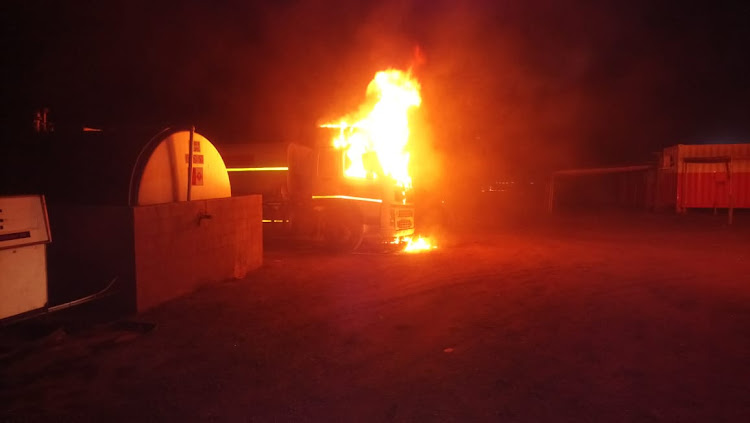 “We, therefore, call for truck drivers to be patient and desist from embarking on actions that result in the damage of property,” said Kaunda.    After receiving reports that truck drivers would embark on a strike from Monday, the provincial government appealed to those behind the strike to ensure it was a peaceful and a legal strike.

The South African Transport and Allied Workers Union (SATAWU) has distanced itself from a planned strike in the trucking industry.   The union said it was concerned for the safety of truck drivers and urged trucking companies to be cautious because in the past strikes called by “faceless people” had often resulted in gruesome attacks on truck drivers with trucks being torched.

Gavin Kelly, chief operating officer of the Road Freight Association, a coalition of truck owners, blamed the All Truck Drivers Forum (ATDF) of instigating it for nefarious means.

“We are concerned for the safety of our drivers, we have talked to government, police and road authorities. We are told they will act swiftly to any illegal acts,” he said.

Kelly said truck owners would operate normally and would not pull any drivers back, but would be in constant communication with them and the authorities should any problems arise.

“We are not going to down tools. We can’t afford it, the country can’t afford it. Every day we spend not working is a loss in tax revenue,” said Kelly.

Sipho Zungu, leader of the ATDF, said it had nothing to do with the protest action. He said it could be a show of support for the organisation as they will be appearing in Pietermaritzburg High Court as respondents against Positive Freight Solutions Forum.

The case involves the alleged hiring of foreign drivers.

Brian Mumbi, a driver in one of a string of trucks, Zambian and other, parked along Durban’s Maydon Road at the harbour, and two others who would not give their names, said they would rush home and not return to South Africa until things settled down.

“It is up to South Africa to protect foreigners.”

“They believe we are willing to accept any (small) amount of money for a job.”

The other drivers said the mood had deteriorated to the point that all foreigner truckers, no matter what country’s number plates their vehicles displayed, were treated suspiciously.

Mumbi said he could not wait to cross the border into Zimbabwe at Beitbridge.

“I pray that I shall be able to go fast and reach the border before these things (the strike) start.”

Recalling once seeing a truck burning 800m in front of him at Mooi River, he said South African protesters “don’t play”.

When in a tight spot, he just prays, he said. Mumbi keeps a Bible with him in his cab, which he reads a lot during the many hours of waiting that his job requires. It has a special place on his dashboard, with two small national flags, one of the Democratic Republic of Congo and the other of Zambia.

Mumbi called on the South African government to make it possible for people to get jobs and skills. He said truckers often faced criminals, including hijackers. He and his colleagues rated South Africa one of the most dangerous of the many Southern Africa Development Community countries they travelled through, coming a close second after the DRC.

“I thank God when I get out of the Democratic Republic of Congo where people are violent and are thieves. And the police do not like to help anyone who does not speak their language, Swahili. South Africa is only a little bit safer,” he said, criticising the country for having so many thieves who either mug drivers, hijack them or steal things like tarpaulins off the backs of trucks.

Mumbi said police had responded to truckers’ requests by increasing patrols, but if crimes were reported, suspects were not arrested and stolen property was never recovered.