Bozzoli, Dr B to ask the Minister of Higher Education and Training

(1)Whether she has found that students who recently walked out of an examination at the University of Limpopo did so because the examination was deemed too difficult; if not, (2) whether she has found that the walk-out was staged due to a different reason; if so, what (a) was the reason, (b) are the further relevant details of the walk-out, (c) action will be taken to address the situation and (d) consequences will be faced by the students who walked out?

REPLY
1. The University of Limpopo responded to the posed question as follows:

The session was not an examination paper as reported in social and mainstream print and electronic media. It was a scheduled test for the second semester Education Studies (HEDA032) module. While the preliminary outcome of the investigation indicates that the test content was of an appropriate standard, the test cover had mistakes, which resulted in a small number of students disrupting the test session.

(2) (a) and (b) While the Department of Education Studies, in which the module is located, has sufficient summative and formative assessment moderation procedures in place, it was found that the test in question was not subjected to these checks. This unfortunately has been found to be one of the contributory factors that led to the disruptions of the test.

(c) Students and staff (lecturer, invigilators, Head of Department and Director of the School) are being subjected to a formal investigation process.

(d) The matter is still under investigation.

There were scenes of chaos at the University of Limpopo (UL) on Tuesday evening, as a vast majority of students stormed out of the lecture hall where their exam was taking place.

Why did students walk out of an exam at the University of Limpopo?

Twitter users uploading videos of the mass walk-out said that the students were protesting against the difficulty of one of the questions on the paper. It’s not yet clear how it got to the point where the entire class was disrupted, but a spokesperson for UL confirmed the validity of the video for us.

“Yes, it’s true. The students did walk out of their exam. There were complaints about how hard one of the questions on the paper was. We believe it was a third-year School of Education class.”

The university representative didn’t give much else away but he did confirm that a report is being filed at UL and that a statement would be shared at some point this week. The demonstration kicked off at some point after 18:00, just after the exam got underway.

The students’ behaviour caused deep divisions on Twitter, where users expressed both their support and disdain for what happened in the lecture hall:

Students walking out of the exam center because the test was allegedly “too difficult” is a disgrace. The reputational damage to (the institution itself and) everyone who acquires a qualification from the University of Limpopo will be colossal.

The University of Limpopo students who walked out of their exam because it was too difficult are my spirit animals ????❤️

Sometimes we need to be honest guys, universities focus too much on difficulty rather than try to see if you actually understand what you’ve been learning

In an ironic twist, the UL students performed a dramatic exit on the same night Thamsanqa Gabuza made headlines for voluntarily leaving the pitch during Orlando Pirates’ victory over Black Leopards. In fact, it’s been said that the learners were merely performing “The Gabuza Challenge”.

South Africa. You’re just too much for us, sometimes. 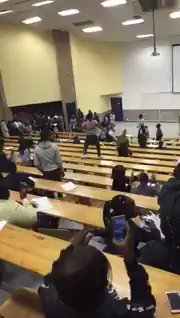