Communism is a system in which there are not supposed to be any economic or social classes, all property is owned by the community, and all people enjoy the same social and economic status.  During the 20th century, communism dominated a significant portion of the world, generating a great of hostility in the capitalist world.

Falling apart: Many in Bulgaria want the building, and other communist structures like it, to be restored to its former glory

The Communist Bloc were a group of nations which, at the end of World War II became joined in alliance by virtue of their communist governments.  While there was occasionally conflict between these nations, they were generally cooperative and united in their stance against the world’s capitalist nations, led by the United States.  Before its collapse in 1991, the Soviet Union (also known as the USSR or sometimes informally just called Russia) dominated the countries in Eastern Europe, forcing them to adopt communist governments after its own model.  For nearly fifty years, then, Bulgaria and its neighbors in Eastern Europe, often under threat of military intervention, followed the Soviet Union and its leadership.

Those who didn’t follow the strict Soviet policies which ruled Bulgaria were ostracized and denied access to educational, personal, and job opportunities.  As a result, most Bulgarians had little choice but to accept what the Communist Party had to offer, for better or worse.

Many minority groups like the Roma (Gypsy) and Turkish populations were marginalized and persecuted. These groups were denied access to basic services, required to give up their own names for ones that sounded more Bulgarian.  Anyone who refused to do so would be pushed even further out of society, or worse yet, sent to concentration camps.

In fact, communism began as a 19th century political movement in response to the injustice of the then-new capitalist system.  As the Industrial Revolution swept the world, so too did capitalism – the system that today governs the United States and much of the rest of the world, characterized by private property, capital accumulation, wage labor, voluntary exchange, a price system and competitive markets.   As a result, the gap between rich and poor became more noticeable.  Early theorists saw some members of society in capitalist nations gain large amounts of wealth (the owners of corporations and factories, or bourgeois) while a great many others toiled under poor conditions and suffered in extreme poverty (the working class, or proletariat).  Communism seeks to overthrow this unequal system for the distribution of wealth through a worker’s revolution, then to redistribute the wealth into the hands of the proletariat.

Karl Marx was a German philosopher and economist, considered the father of Communism.  Along with Friedrich Engels, Marx wrote a book called The Communist Manifesto in 1848. Their theories have become known as Marxism.  According to his manifesto, Marx’s hypothetical communist government had the following characteristics:

The actual results of communist governments have been nothing like the theories of Marxism. The low class people that were supposed to be helped by Marxism were often treated horribly by the leaders of their governments. For example, it is estimated that Soviet Union leader Joseph Stalin had over 40 million people murdered to maintain his own power – all under the cover of “defending the gains of the communist revolution.” Stalin created labor camps called gulags for anyone who disagreed with the government.  He even permitted man-made famines in the Soviet Union in an effort to force the populace to accept collective, government-run farms.

Communist states generally have much less individual freedom than non-communist countries, placing a far greater emphasis on the collective good of the people as a whole, at least in theory.  In the past, and still today to a degree, many countries often prevent or greatly limit the practice of religion, order certain people to work certain jobs, and prevent people from moving around or moving to other nations. People lose all rights to ownership and government officials become incredibly powerful.
***

Sitting atop a mountain like an abandoned flying saucer, this giant structure looks like it was created on another planet.   The House of the Bulgarian Communist Party was built in another era, however, one that long ago crumbled along with the way of life it embodied.  After the fall of the Iron Curtain in 1989, Bulgaria moved into a new age of parliamentary democracy.

Crumbling away: The oval skeleton of the House of the Bulgarian Communist Party on Mount Buzludzha in central Bulgaria has lain in a state of neglect for over 20 years.   That left buildings like the House of the Bulgarian Communist Party, which perches at the top of Mount Buzludzha in the centre of the country, in a state of neglect.   It is one of a number of huge communist structures that many believe, if restored, could attract Western tourists to the region in their droves.    But the Bulgarian government does not have the resources to carry out the necessary extensive repair work, at an estimated cost of 30million leva (£12million), nor to pull them down.   Boycho Bivolarski, the BSP Socialist party chief from the nearby city of Stara Zagora, told AFP news agency: ‘This monument is unique in Europe and, if restored, it can attract tourists, especially Western, and bring money.’ 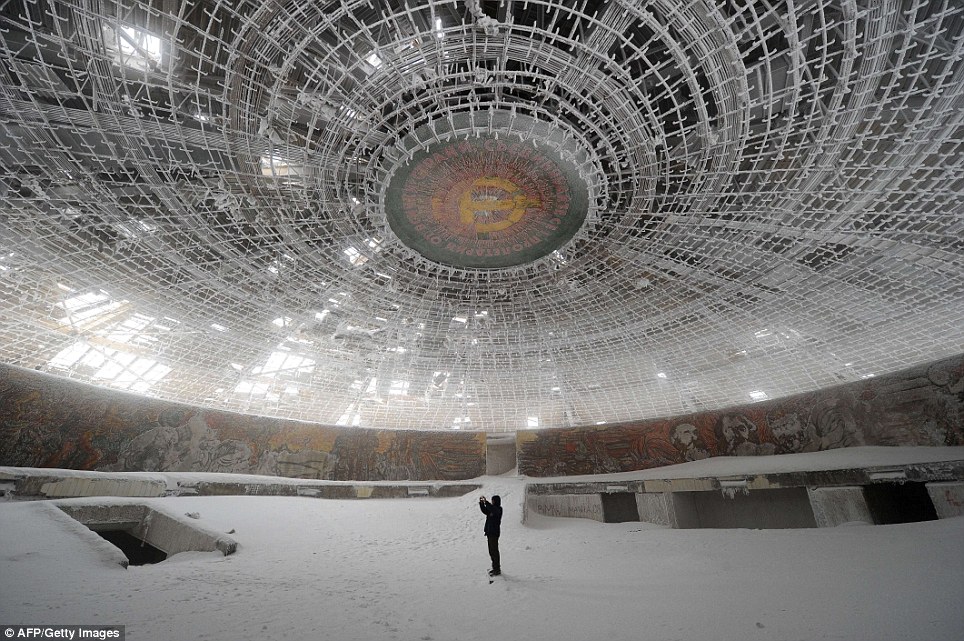 A pair of hands holding torches that sits at the bottom of Mount Buzludzha has been graffitied.    A wall mosaic of Bulgaria’s communist dictator Todor Zhivkov has been destroyed, while others of communist heroes Marx, Engels and Lenin remain just about recognisable.   In a sign that many of the local population have no interest in such buildings, Prime Minister Boyko Borisov transfered ownership of the structure to the BSP Socialist party in November.   He said: ‘Let them take care of it if they’re so proud of it.’  The BSP Socialists have managed to secure the entrances to prevent would-be trespassers from entering.

***
An Ancient Thracian rock step pyramid with a rock sun temple dating back to 2500 BC has been identified in the Eastern Rhodope Mountains in Southern Bulgaria by an expedition of historians and thracologists.