The Saudi Border Guard Development Program is generally dubbed MIKSA for the Ministry of Interior Kingdom of Saudi Arabia. Bilateral negotiations with France for this project began in the early 1990s, when a deal with Thales’ predecessor Thomson-CSF was first envisaged. The MIKSA proposal was the result of discussions between Saudi interior minister Prince Nayef Bin Abdelaziz and his French counterpart Charles Pasqua. They signed a protocol agreement in 1994, but the project remained stalled for years. As of 2006 Thales planned the installation of 225 radars, covering the entire 5,000 km of coastline and land border, along with 400 frontier posts, barracks for security forces, a score of helicopters, reconnaissance planes, and a control center in Riyadh.

The risk of violence insourcing back to Saudi Arabia from Iraq prompted construction a fence along the kingdom’s northern border. That concept became a serious initiative in 2006, scheduled for completion by the end of 2009. In October 2006 Saudi Arabia’s Deputy Interior Minister Prince Ahmed bin Abdel Aziz confirmed plans for a 560-mile security fence along the kingdom’s border with Iraq. This came amid mounting concern about the deteriorating security situation in Iraq. Construction of the fence was scheduled to begin in 2007 and was anticipated to take five or six years to complete. The kingdom originally invited bids for the $500 million project in April 2006. The contract is part of the larger $12 billion MIKSA project to improve Saudi border security throughout the Arabian Peninsula.

Plans for the Iraqi frontier included building fences on either side of a 100-meter “no-man’s land” containing concertina wire obstacles, ultraviolet sensors and night vision cameras with facial recognition technologies, and buried motion detectors. Command posts, helipads and observation towers linked with access roads were to be spaced along the frontier. The entire security strip would retain existing sand berms at the Iraqi border. The fence project would include 135 electronically controlled gates, although it was unclear if the barrier would seal the entire border or just major crossing points.

The original bids were submitted in October 2007, with the expectation that a contract would be awarded by the end of the year. However, the decision was delayed by the proposal to split the contract because of the rising cost of raw materials, which has increased the level of risk for bidders. The delay was also due to Riyadh seeking to standardize the systems it uses across a wider proposed network. The Saudi government had already invested upwards of $1.8 billion to improve security on the Iraqi border, according to the Saudi National Security Assessment Project. This included a 20-foot-high berm and a regularly patrolled six-mile wide security zone along 500 miles of the border.

With the backing of chancellor Angela Markel, the German side of EADS, working in partnership with RTCC [Al Rashid Trading & Contracting Co, the Saudi partner of EADS], won the first USD 907 million part of the contract which involved building a 900 km fence along the border with Iraq. Other firms that bid for the northern border fence contract include the local Al Arab Contracting Company and the local Al Mabani with the US’ Raytheon. El-Seif formed a consortium with the US’ DRS technologies for its bid.

Saudi Arabia signed a contract in 2009 to build a security fence to cover all of its borders with Iraq, totaling 9000 kilometers in length. Saudi Arabia’s decision on 30 June 2009 to contract the French-German group EADS N.V. to build a surveillance system for its 9,000 km of borders enabled Paris to save face. After being under contract for the northern border security, which is then under execution, EADS Defence & Security was awarded (as prime contractor) the border security program covering the full borders of the Kingdom of Saudi Arabia. This contract was to be executed over 5 years and is the largest contract ever competed worldwide as a full solution. The project has been strongly competed through an international competition for several years.

FLIR Systems received a $2.4 million order to supply sensor systems for the Saudi Border Guard Development Program. The company, based in Portland, Oregon, has been assigned by prime contractor EADS to deliver and install its HRC Multi-Sensor Systems to protect 9,000 kilometers of border fence.

By October 2010 Saudi Arabia had established 119km of security barriers along Yemeni border to prevent smuggling and infiltration from Yemen. Deputy commander of the Saudi border guards on the Saudi-Yemeni border Abdul-Aziz al-Sabhi said the security barrier was erected in stages, with early results revealing that the rates of smuggling and infiltration have been significantly reduced. Construction of the border barrier began in 2003 but stopped in 2004 following complaints by Yemen, which said it violated an early border treaty. Some tribes straddle the border, and the Yemeni government protested, saying the tribes needed free access for grazing. The security barrier is a network of sandbags and pipelines 3 meters high and filled with concrete. It is monitored by electronic surveillance equipment.

In 2013 Saudi Arabia resumed the project abandoned in 2004 to build a three-meter (10-foot) fence the length of its border with Yemen. Reports that the project was back on had already drawn condemnation from human rights activists who accused Saudi Arabia of dealing a new blow to its impoverished neighbour after deporting thousands of Yemeni workers under new labour regulations in recent weeks. The fence along the 1,800-kilometer (1,125-mile) border would consist of a network of sandbags and piping, fitted with electronic detection systems. By 2013 Saudi Arabia was forecast to spend over $20 billion by 2018 on border fence security systems. Bordered by Yemen and Iraq, Saudi Arabia would use border perimeter security, including physical fences, electronic fences, surveillance and listening equipment as well as closed circuit camera (C3) systems

President Trump said, “a nation without borders isn’t a nation at all.” He wants to start on the wall between Mexico and the United States. So when is he going to build a border wall between the United States and Canada, and who’s going to pay for that one?
https://www.mercurynews.com/2018/01/10/letter-when-is-donald-trumps-wall-on-canada-border-going-up/

The move “will improve safety in both countries”, Trump said after signing the orders on Wednesday.    This will help dismantle cartels, keeping illegal weapons and cash from flowing out of American and into Mexico.https://www.aljazeera.com/news/2017/01/trump-signs-order-border-wall-mexico-170125185244055.html

As a European Union member, the German government is also implicated in the arming of the Turkish border against refugees. The EU states have provided the government in Ankara with security and surveillance technology valued at more than 80 million euros in exchange for the protection of its borders, according to research conducted by DER SPIEGEL and the European Investigative Collaborations network (EIC).

This included the transfer of 35.6 million euros by Brussels to the Turkish company Otokar as part of its IPA regional development program for the construction of armored Cobra II military vehicles, which are now being used to patrol the border to Syria.

Arms manufacturer Aselsan, of which the Turkish state owns a majority stake, was also commissioned by the EU to provide Ankara with 30 million euros worth of armored and non-armored surveillance vehicles for patrolling the Turkish-Greek land border.

In March 2016, the EU and Ankara closed a deal under which the Europeans would pay 3 billion euros to Turkey if the country kept the refugees inside its borders. The money was intended to help the Syrians in Turkey, but 18 million euros went to a Dutch company that manufactured six patrol boats for the Turkish coast guard.

The border to Turkey had remained open to Syrians until summer 2015. Some 3.5 million Syrians came to Turkey as refugees, more than any other country. Since then, Ankara has closed the Syrians’ escape route, partly due to pressure from the EU. Anyone still seeking to escape the war in Syria must now either be prepared to pay a lot of money or to risk their lives.

Ultimately, the EU’s refugee agreement with Turkey has merely served to shift the crisis: Fewer people are dying now in the Aegean, where the number of boat crossings to Greece has decreased since the signing of the agreement. Instead, people are now dying at the Turkish-Syrian border.

EU FUNDS 764km BORDER WALL BETWEEN SYRIA AND TURKEY!
EU condemns Trump’s proposed Mexican border wall to control illegal immigration.
EU condemns Israel’s wall / security fences to protect its citizens from jihadist terrorism.
“The EU states have provided the government in Ankara with security and surveillance technology valued at more than 80 million euros for the protection of its borders.
This included the transfer of 35.6 million euros by Brussels to the Turkish company Otokar as part of its IPA regional development program for the construction of armored Cobra II military vehicles, which are now being used to patrol the border to Syria.”
Media and leftists silent

Turkey shares an 822 kilometer border with Syria, a country which has suffered bombardment from all angles since 2011, including several EU member states. The wall runs through the provinces of Sanliurfa, Gaziantep, Kilis, Hatay, Mardin and Sirnak and incorporates physical, electronic and advanced technology layers.

While the EU and its loyal followers persistently preach that any form of borders are racist, many will be shocked to learn that the construction of this wall was largely funded by the 28-member state union.

“The EU states have provided the government in Ankara with security and surveillance technology valued at more than 80 million euros in exchange for the protection of its borders.

This included the transfer of 35.6 million euros by Brussels to the Turkish company Otokar as part of its IPA regional development program for the construction of armored Cobra II military vehicles, which are now being used to patrol the border to Syria.”

Additionally, in 2016, the EU pledged €3 billion to Turkey under the guise of humanitarian aid to the Syrian refugees in the country. In reality, this deal served to trap the existing 3.5million refugees in Turkey and left those hoping to flee their war torn country at even further risk.

Once these resources are to be used in full, the EU will mobilise an additional €3 billion to the end of 2018, as confirmed by a press release of the European Commission.

Next time an EU politician is giving an ethics lecture in regards to immigration and the Syrian conflict, keep this in mind. 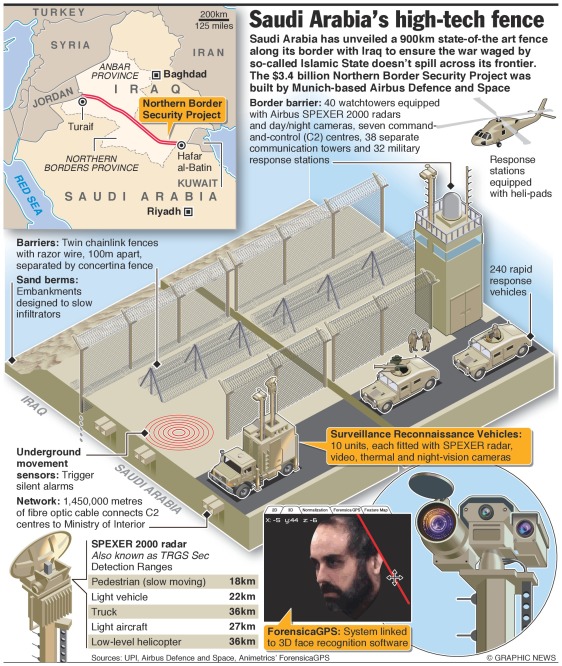 Botswana has built an electrified metal fence on the border with Zimbabwe. According to official sources, it was built for the sole purpose to prevent “the spread of an infectious disease of cattle (hoof and mouth desease) from farms located in Zimbabwe.” In fact, the electrified fence was built to protect the border of Botswana from people fleeing from neighboring Zimbabwe.

India has built a wall of 3,300 km between Indian held Kashmir (Jammu Kasmir) and Pakistan.

The Great Wall of Moroccan known as the “security zone”. This wall, 2,720 kilometers in length, protects from hostile actions Morocco Polisario guerrillas.

Since 2007, Thailand is building a fence on its borders with Malaysia, Already built 75 kilometers. Thai troops patrolled the fence.

The high voltage electrified walls in the Spanish territories of Ceuta and Melilla,