The success of the operation to destroy a number of reservoirs in Germany which became known as Operation Chastise, the RAF had a very special method. The specialty of this operation began with the use of selected squadrons, the use of specially modified Avro Lancaster bombers.     The crew was selected from various countries (Canada, US, New Zealand, UK), the tactics that were deployed were also specialized, and used specially designed bombs. As planned, the attack would be carried out at night during the full moon when the lake water was at its peak. 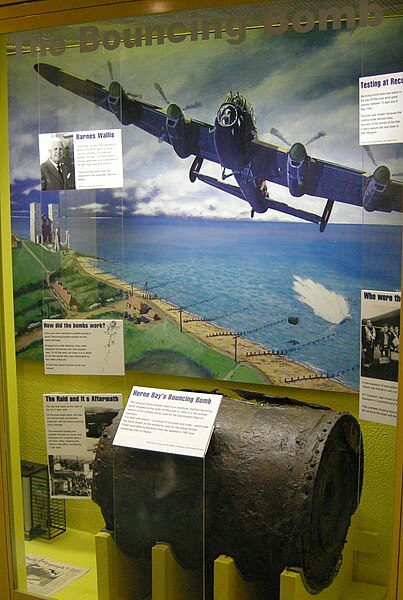 On the night of 16-17 May 1943, Wing Commander Guy Gibson led 617 Squadron of the Royal Air Force on an audacious bombing raid to destroy three dams in the Ruhr valley, the industrial heartland of Germany. The mission was codenamed Operation ‘Chastise’. The dams were fiercely protected. Torpedo nets in the water stopped underwater attacks and anti-aircraft guns defended them against enemy bombers. But 617 Squadron had a secret weapon: the ‘bouncing bomb’.

The Möhne dam in Germany’s Ruhr valley secured the water supply for much of the surrounding area. Water from its reservoir was also used to generate electricity.

Operation Spectacular Damaged Dam Nazi Germany
This operation was led by Guy Gibson alias the Boy Emperor who was known to be arrogant but capable in the sky.

The tough pilot of 617 Squadron who was born in India is a young pilot (26 years old) who already has three children. Initially, Gibson was not accepted when he wanted to join the RAF. But because the RAF needed many pilots to support the expansion of its strength, Gibson was finally accepted as a candidate for pilot.

After graduating from flying school and getting the wing in May 1937, Gibson was selected as a bomber pilot and then served in the 83 Bomber Squadron based in the Turnhouse area near Edinburgh. At this base Gibson flew the Hawker Hind. As a pilot, Gibson is known as a figure who is too confident that he has no friends and then gets the nickname Boy Emperor.

In the spring of 1938, 83 Bomber was transferred to Scampton and the crew then practiced flying in the twin-engine bomber, Handley Page Hampden. Although Gibson was only known as a flier of average achievement thanks to his bravery, the instructors scored quite well.

When WWII broke out and Nazi Germany began to invade Norway, 83 Bomber began to be involved and tasked with dropping landmines in the Kattegat and Skagerrak areas. Not only the Norwegian region, 83 Bomber planes also launched attacks on Germany and the 83 Bomber pilots’ action was known as an act of recklessness and courage considering that the Luftwaffe’s strength was still at its peak.

Thanks to this daring attack, the 83 Bomber pilots were awarded the “Distinguised Flying Cross”. But the most daring action was that of Gibson when 83 Bomber got the task of dropping bombs on a number of targets in Berlin. A number of 83 Bomber pilots failed to find the target, but Gibson managed to fly the plane towards the target and successfully destroyed the target.

It was thanks to this natural talent and courage that Gibson, who began to have a number of friends at 83 Bomber, was trusted to lead the attack to destroy a number of reservoirs in Germany, Operation Chastise.
(Agustinus Winardi. Source: spasi.co.id)

One of his engineers once said that it was his ability to find solutions to daily problems that commanded their respect. It was typical of the man that when he was in charge of designing and building the airship R100, instead of staying aloof in his office, he placed his own drawing board in the middle of the drawing office where he could encourage and assist his team at first hand.

Sir Barnes Wallis who developed the bouncing bomb, tested them on Chesil Beach in Dorset during the war. In the winter of 1989 I was asked by Brooklands Museum to Transport one the Royal Navy had just recovered from Chesil Beach, back to Brooklands.

On the night of 16-17 May 1943, Wing Commander Guy Gibson led 617 Squadron of the Royal Air Force on an audacious bombing raid to destroy three dams in the Ruhr valley, the industrial heartland of Germany. The mission was codenamed Operation ‘Chastise’. The dams were fiercely protected. Torpedo nets in the water stopped underwater attacks and anti-aircraft guns defended them against enemy bombers. But 617 Squadron had a secret weapon: the ‘bouncing bomb’.