The House of Lords, the upper chamber of Great Britain’s bicameral legislature. Originated in the 11th century, when the Anglo-Saxon kings consulted witans (councils) composed of religious leaders and the monarch’s ministers, it emerged as a distinct element of Parliament in the 13th and 14th centuries. 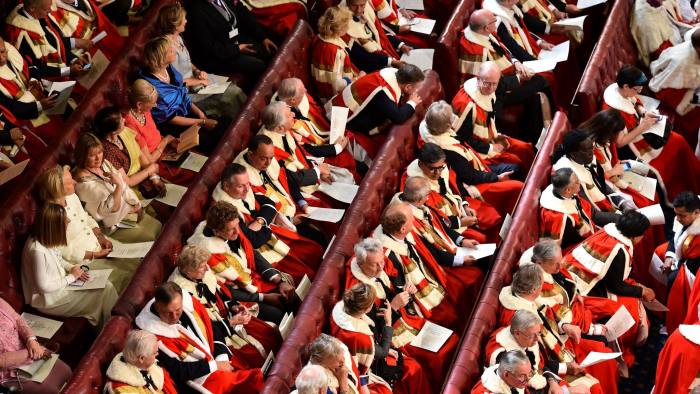 It is further argued by some observers that the House of Lords serves a valuable function by providing a national forum of debate free from the constraints of party discipline. Although the defeat of government legislation by the house has been relatively rare on major legislation, it sometimes does defy the government, especially Labour Party governments. For example, 230 pieces of legislation proposed by the Labour government of 1974–79 were defeated by the House of Lords.

In 1998 the Labour government of Tony Blair introduced legislation to deprive hereditary peers (by then numbering 750) of their 700-year-old right to sit and vote in the upper chamber. A compromise, however, allowed 92 of them—who were elected by their fellow peers—to remain as temporary members. The measure, which went into effect in late 1999, was seen as a prelude to wider reform, and in 2007 members of the House of Commons offered support for two separate proposals, one calling for the House of Lords to be 80-percent elected, the other 100-percent elected.

The nonbinding vote was influential in forming the July 2008 White Paper put forward by Justice Secretary Jack Straw that outlined potential reforms. These included the reduction of the total number of lords, the complete severance of ties between the peerage and seats in Parliament, and an either 80- or 100-percent elected chamber consisting of lords serving nonrenewable 12- or 15-year terms. Future votes in both houses were required before any such restructuring of the House of Lords could occur.

In the ancient House of Lords, you can inherit a seat from your family.

The House of Lords debates Brexit

It currently comprises the following elements:

(1) the Lords Spiritual, including the archbishops of Canterbury and York and the bishops of Durham, London, and Winchester, as well as 21 other bishops holding sees in England;

(3) from January 1980, all life peers and peeresses created under the Life Peerages Act of 1958. A fourth element, the Law Lords, consisting of the judges of the Supreme Court of Judicature (the Court of Appeal and the High Court of Justice), acted as Britain’s final court of appeal (except for Scottish criminal cases) until 2009, when the Law Lords were abolished and the Supreme Court of the United Kingdom came into being. The total number of persons qualified to sit in the House of Lords is in excess of 670.

In the ancient House of Lords, you can inherit a seat from your family.   Lord, in the British Isles, a general title for a prince or sovereign or for a feudal superior (especially a feudal tenant who holds directly from the king, i.e., a baron). In the United Kingdom the title today denotes a peer of the realm, whether or not he sits in Parliament as a member of the House of Lords. Before the Hanoverian succession, before the use of “prince” became settled practice, royal sons were styled Lord Forename or the Lord Forename.

On 29 March 2017 the prime minister notified the European Council of the UK’s intention to withdraw from the European Union.

The House of Lords is looking at the work of the EU, the implications of leaving and the exit process. This page contains a round-up of some of the key reports, analysis and debates on Brexit from the Lords on the topic of the process of exiting the EU.

The bill to confer power on the Prime Minister to notify the European Council, under Article 50, of the UK’s intention to withdraw from the EU, started its journey through the House of Lords on 8 February 2017 and concluded with Royal Assent on 16 March 2017.

The bill to repeal the European Communities Act 1972 and make other provisions in connection with the UK’s withdrawal started its journey through the House of Lords on 18 January 2018 and concluded with Royal Assent on 26 June 2018.

Despite an average age of 70 and a preference for starting work in the afternoon, over the past 16 years members of the House of Lords have become more rebellious.

Monday’s debate on chancellor George Osborne’s cuts to tax credits is just the latest example of peers’ willingness to challenge the government. Since the House of Lords was last reformed in 1999, the upper chamber has grown bigger, less conservative — and more defiant.

The removal of most of the hereditary peers before the turn of the century led to a change in both the composition and attitude of the Lords, according to Professor Meg Russell, a constitutional scholar at University College London. For the two centuries before the House of Lords Reform Act (1999), the Conservative party dominated the upper chamber. In the months before that act was passed, the upper chamber twice opposed the lowering of the age of consent for homosexuals from 18 to 16, a now rare example of the Lords proving less liberal than the House of Commons (the Labour government eventually used the Parliament Act to force through the reform). After the reforms of Tony Blair’s Labour government, Liberal Democrat and crossbench members began to hold the balance of power, making the ermine benches home to more left-leaning and assertive peers.

The governments of Mr Blair and Gordon Brown suffered more than 450 defeats in the Lords from 1999-2010. Although most defeats can in theory be overturned when bills return to the Commons, in practice they are often not. Under New Labour it was arguably the Lords, rather than the Commons, that sought to uphold civil liberties, for example by blocking restrictions on jury trials and the detention without charge of terrorist suspects.

The Lords inflicted 99 defeats on the coalition government of 2010-15 and at the same time took on established conventions such as the “financial privilege” of the Commons whereby the Lords refrains from amending legislation solely concerning taxation and expenditure.

That privilege dates back to the 17th century and is enshrined in the 1911 Parliament Act that proposed that, in effect, so-called “money bills” should not be amended by the Lords. It is financial privilege that the government is citing in regard to tax credits. That was tested in the last parliament when the Lords sought to block or amend some cuts to public spending, most notably around legal aid and work and pensions secretary Iain Duncan Smith’s cap on working-age benefits.

Opposition Lords say the convention does not apply this time round because the tax credit legislation, like that concerning legal aid, is not part of a dedicated finance bill. Nevertheless, they admit that the scale of public spending at stake — more than £4bn a year — is “unprecedented”. At the same time that the Lords has become more assertive, it has also grown in size, especially so under David Cameron, prime minister.

Prof Russell has calculated that in the 11 years of Labour government from 1999-2010 the chamber increased by 40-70 members, depending on whether those on leaves of absence are included. But in Mr Cameron’s first term, the upper chamber grew two to three times as fast, reaching 826 members (by comparison, 650 MPs were elected in May’s general election).

Bigger and bolder, the Lords has also proved less popular. In a study this year, the UCL Constitution Unit found that the upper chamber’s reputation among the public and the national media had declined sharply since 2010. In part this reflects the expenses and other scandals, most recently the resignation of Lord Sewel, who quit in July after a tabloid newspaper published a video apparently showing him snorting cocaine with two prostitutes. But Prof Russell suggests the Lords’ declining popularity may also be because the aspect the public likes most about the upper chamber — its independent expertise — has been diluted under Mr Cameron. Mr Cameron’s appointments have been disproportionately political.

The House of Lords Appointments Commission, which proposes expert independent peers, has been invited to make only eight nominations since 2010 — compared with the 31 in 2005-10. In his election manifesto, though, Mr Cameron resisted calls to further reform the Lords, saying that it was “not a priority”. The controversy over the cuts to tax credits may persuade the prime minister to think again.