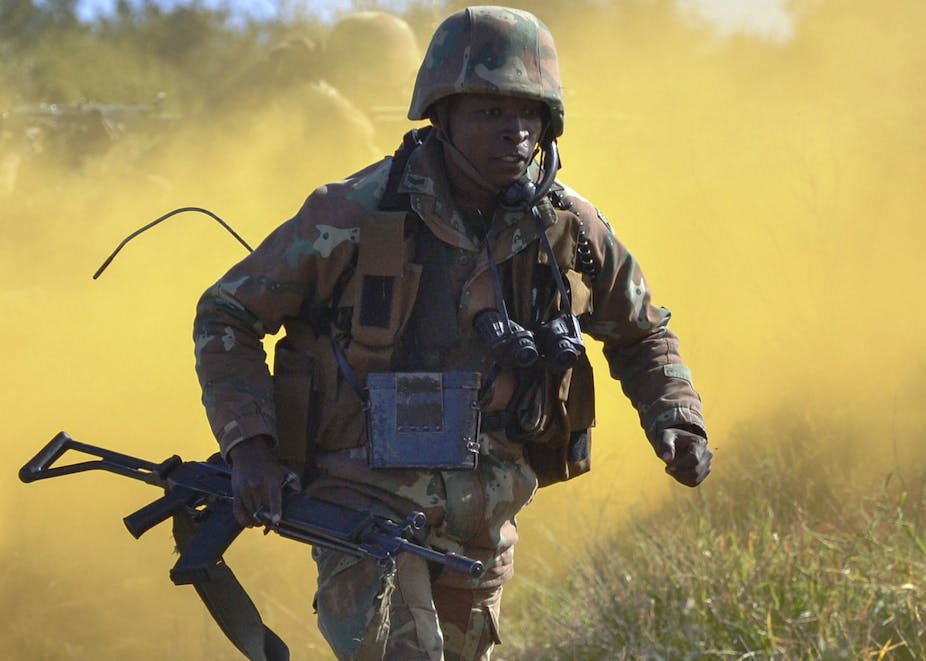 Much has been said about the size of South Africa’s defence budget, the tension between commitments and capabilities, and the need to arrest the decline in defence. Despite the fact that the South African National Defence Force (SANDF) is still a major player in Southern Africa, it has real problems.

For one, directing vital peacekeeping funds, which should be part of the defence budget, away from the military to the national budget, is a major problem. But, it’s time for the SANDF to face some serious realities.

Firstly, it should not place its hope in the rollout of the current Defence Review. The review doesn’t provide an honest outline of the threats and vulnerabilities facing the country, defence capabilities needed, military organisation or the cost to taxpayers.

The review saw the light in 2014 when the country’s economic outlook was substantially better. It was deliberately drafted without considering the costs and threats facing the country. As nothing more than an honest internal analysis of the state of South African defence, the document is of little strategic significance.

Secondly, in view of the social, educational and other economic realities, there is no fat in the national budget for defence. It needs to accept the reality that it is not to receive a cent more than what’s already allocated. For the foreseeable future, defence spending will remain at about 1% of GDP. South Africa cannot afford the 2% of GDP that’s accepted for defence spending across the world.

In addition, the SANDF also confronts a number of critical political realities. It is, for all practical purposes, the face of South African foreign policy in Africa and is, to a large extent, functioning in a domestic political conundrum shaped by the policy and political cravings of the governing party and its elite.

It’s also subject to the political expressions of policy documents such as the National Development Plan, which aims to eliminate poverty and reduce inequality by 2030. The Force is also hostage to the factional battles within the governing African National Congress (ANC), as reflected in the fallout over such slogans as “radical economic transformation”. Like all sectors of the society, defence is also victim to the political manoeuvring, underpinning the current national executive’s need for survival.

For the SANDF, these realities unfold along the lines of a need to be everything for everybody, with little strategic guidance and priorities forthcoming from the political domain. In practice, this means that there’s no emphasis on defence priorities and that the demands for the Defence Force to “assist” unfolds through a process of adhocracy.

Generals, functioning in a self sanctioning institutional culture of misplaced political loyalty, stretch the defence capacity to please their political masters. In the process, they oversee the breakdown of the institution they command, because there are limits to what a defence force can do.

Politicians don’t necessarily understand the borders of these limitations and, if not clearly outlined, this may have disastrous consequences for the military as an institution.

From a theoretical perspective, there are two broad approaches to deal with a problematic defence budget. The so-called interests-driven approach accepts the need to prioritise defence commitments in line with national interests, which the Force needs to extend or protect.

The priorities should provide a clear indication of what funding level is required to execute the defence function. This approach, though, has to be content with the reality that no country in the world has the capacity to fund all its defence priorities.

The budget driven approach, in contrast, takes the national budget as a point of departure. The question that drives this approach is what can be done with the money allocated for defence. This is the question central to South Africa’s defence budget woes.

An analysis of the structure of South African defence spending provides a better understanding of the military’s budgetary problems. As a guideline, defence forces around the world accept that the budget, irrespective of its size, ought to be divided between personnel, operational and capital expenditure, more or less in equal portions.

In reality this boils down to between 30 and 35% for operational and capital expenditures and 35 to 40% for personnel. This represents the first major challenge in South Africa’s defence budget: almost 80% of it is for personnel expenses.

The rest is allocated for operational expenditure, with only limited money available for any capital projects. It’s no surprise then that the Defence Force complains about the maintenance of equipment, infrastructure, training, administration and force preparation.

The truth is: if personnel are the problem; they are also the solution. The failure of the defence force over many years to implement an up-or-out personnel management system is very much at the heart of its budgetary problems. The nature of military work relies on the availability of young people. In a typical military hierarchical personnel system, most of them must be out by age 30.

This is to a large extent a reflection of the intimate link between the executive and the military veterans of Umkhonto we Sizwe, the former armed wing of the governing ANC. This is embodied in the appointment of Kebby Maphatsoe as the deputy minister of Defence and Military Veterans.

In line with the Veterans Act, a new body has been created to deal specifically with military veterans’ affairs. The new South African National Military Veterans Association is a public entity, state-funded, and accountable to the department. The SANDF is now increasingly financially and socially directly responsible for military veterans.

Money has very little to do with many of the challenges the military faces. Yet, its leadership sees the lack of money as its single most important challenge. Searching for the solution in the budgetary domain is the easy way out.

Blame it on a lack of money and no thinking is required; no innovation; no initiative; no dynamism; no drive. All one has to do is drift along. The solution is rooted in difficult political and strategic decisions about the future of the Defence Force. Decisions that will address, among other things, the professionalism and effectiveness of the organisation, the oversized bureaucratic corporate army in Pretoria, and the age brackets of serving personnel. More specifically, the SANDF should not be allowed to spend more than 40% of its budget on personnel!