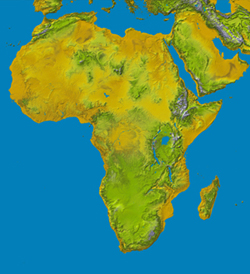 The Shuttle Radar Topography Mission produced the first detailed elevation model of most of the world.

Here we use the model, overlain by two Landsat satellite images, to simulate a flight around northern Tanzania.

We are descending toward Mount Kilimanjaro, which is high enough to have glaciers, even though it is just south of the equator.

Mount Kilimanjaro is a volcano, as are most peaks that rise above the savanna here.

Mount Meru, another volcano, shows evidence of explosion and collapse of its eastern flank.

The lower lying Ngurdoto Crater in the foreground now hosts a diversity of African wildlife.

We are now flying west toward the East African Rift, where the African continent is splitting apart.

We see two stands of the rift, each starting at a muddy lake in the foreground and converging northward to meet at a bright salt-encrusted dry lake bed in the distance.

We will now proceed up the western stand, flying over volcanic highlands that have emerged from the rift, and then loop across the dry lake, Lake Natron.

In arid areas dry lakes like this form in topographic basins where evaporation generally keeps up with the rate of stream water inflow.

Moving eastward, we see that ground cracking, related to the rift, is evident upon and between volcanic peaks.

Here at Mount Kitumbeine, we are reminded that the jungle occurs only at the high, cooler elevations, where mountain peaks extract moisture from passing air masses.

Back to the Highlands, we circle the 20-kilometer wide Ngorongoro Crater, which is one of the world’s great wildlife preserves.

The crater walls encircle elephants, giraffes, rhinos, lions, and hippos, among others.

We are now returning across the savanna to Mount Kilimanjaro, the highest peak in Africa.

The glaciers here are melting and are expected to disappear soon.

Satellite imagery and elevation data helps us to monitor and understand such changes in the environment, here in Africa as well as across the globe.

Take a jaunt on the wild side as NASA JPL Shuttle Radar Topography Mission conducts an aerial safari of Africa varied topography.

The current high topography of the East African Rift system is due to the southward propagation of a topographic swell that encompassed the western margin of Arabia and the Afar region before 30 million years ago.