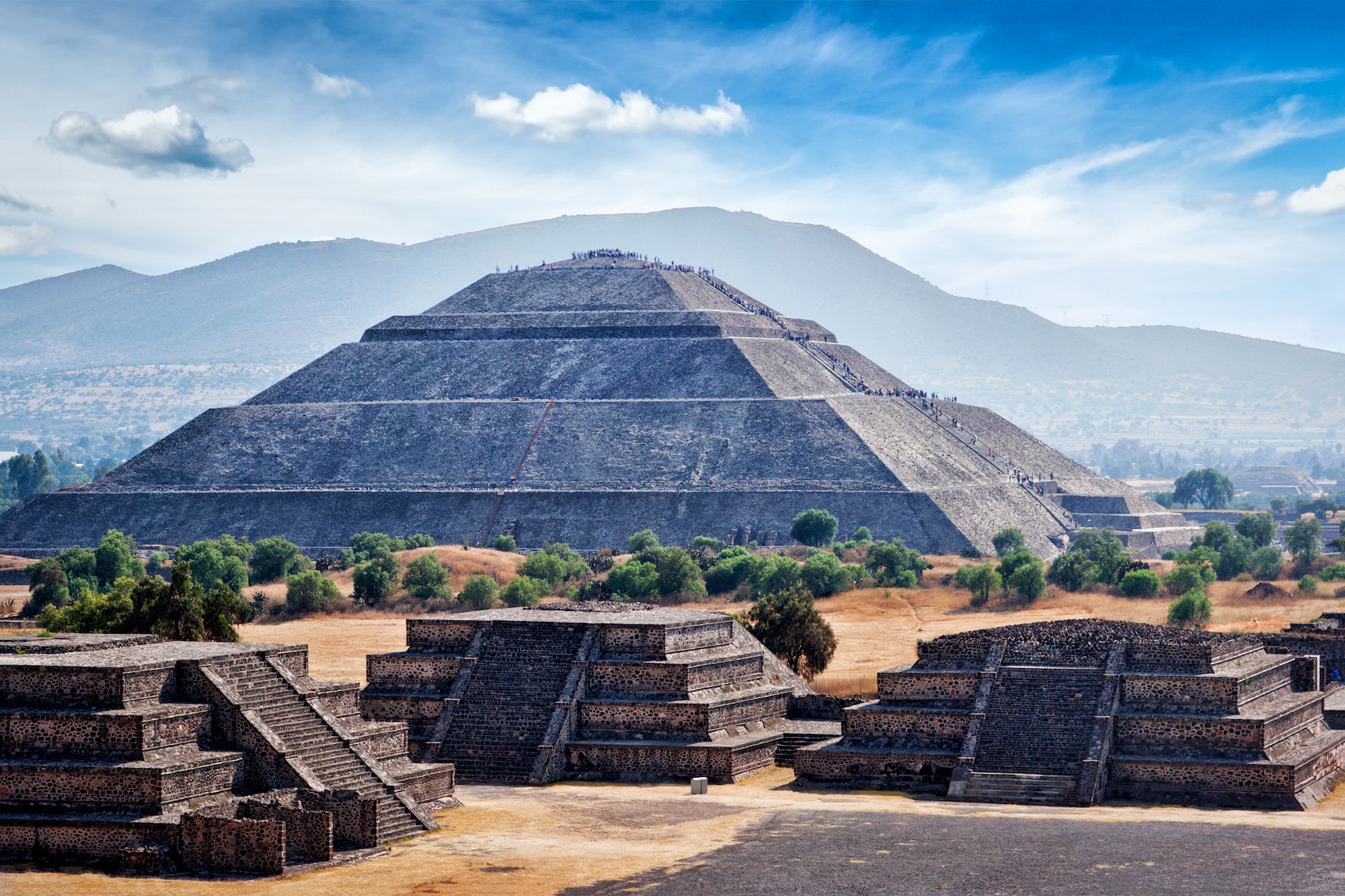 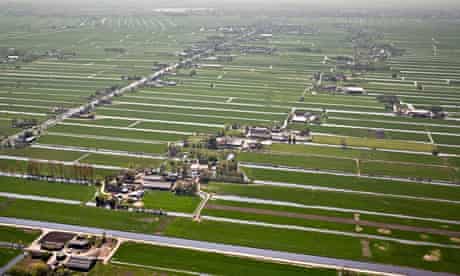 Holland is famous for its dykes, but the Afsluitdijk is also know to be the longest dyke of Europe, with a 32km long motorway build on top. But why did they turned a sea into a lake? Come and see for yourself and also indulge yourself with some interesting information and history of Holland.
https://www.youtube.com/watch?v=tM4JSiKbUrU

The historic region of Mesoamerica comprises the modern day countries of northern Costa Rica, Nicaragua, Honduras, El Salvador, Guatemala, Belize, and central to southern Mexico. For thousands of years, this area was populated by groups such as the Olmec, Zapotec, Maya, Toltec, and Aztec peoples.

Built by Spanish colonialists, Mexico City was actually constructed right on the ruins of the ancient Aztec city of Tenochtitlan. The whole city, including the Great Pyramid of Tenochtitlan, was destroyed by the Spanish conquistador Hernan Cortes during his conquest of the Aztec empire. As a result, beneath the modern city lies a rich treasure trove of archaeological remains.
https://www.youtube.com/watch?v=KKGLN7idPPc

Where did they come  from?

The legendary origin of the Aztec people has them migrating from a homeland called Aztlan to what would become modern-day Mexico. While it is not clear where Aztlan was, a number of scholars believe that the Mexica—as the Aztec referred to themselves—migrated south to central Mexico in the 13th century.

The Mexica founding of Tenochtitlan was under direction from their patron god Huitzilopochtli, according to legend. The legend recounts that Huitzilopochtli told them to found their settlement in the place where a giant eagle eating a snake was perched on a cactus. This settlement, in the region of Mesoamerica called Anáhuac located on a group of five connected lakes, became Tenochtitlan. Archaeologists date the founding of Tenochtitlan to 1325 C.E.

At first, the Mexica in Tenochtitlan were one of a number of small city-states in the region.  In 1428, the Mexica allied with two other cities—Texcoco and Tlacopan. They formed the Aztec Triple Alliance and were able to win the battle for regional control, collecting tribute from conquered states.

Key to the rise of Tenochtitlan was the agricultural system that made it possible to feed the population. Chinampas, small, artificial islands created above the waterline, were one feature of the system. Recordkeeping was important to tracking tributes. Two pictographic texts that survived Spanish destruction—the Matricula de tributos and Codex Mendoza—record the tributes paid to the Aztecs. The codices also recorded religious practices. 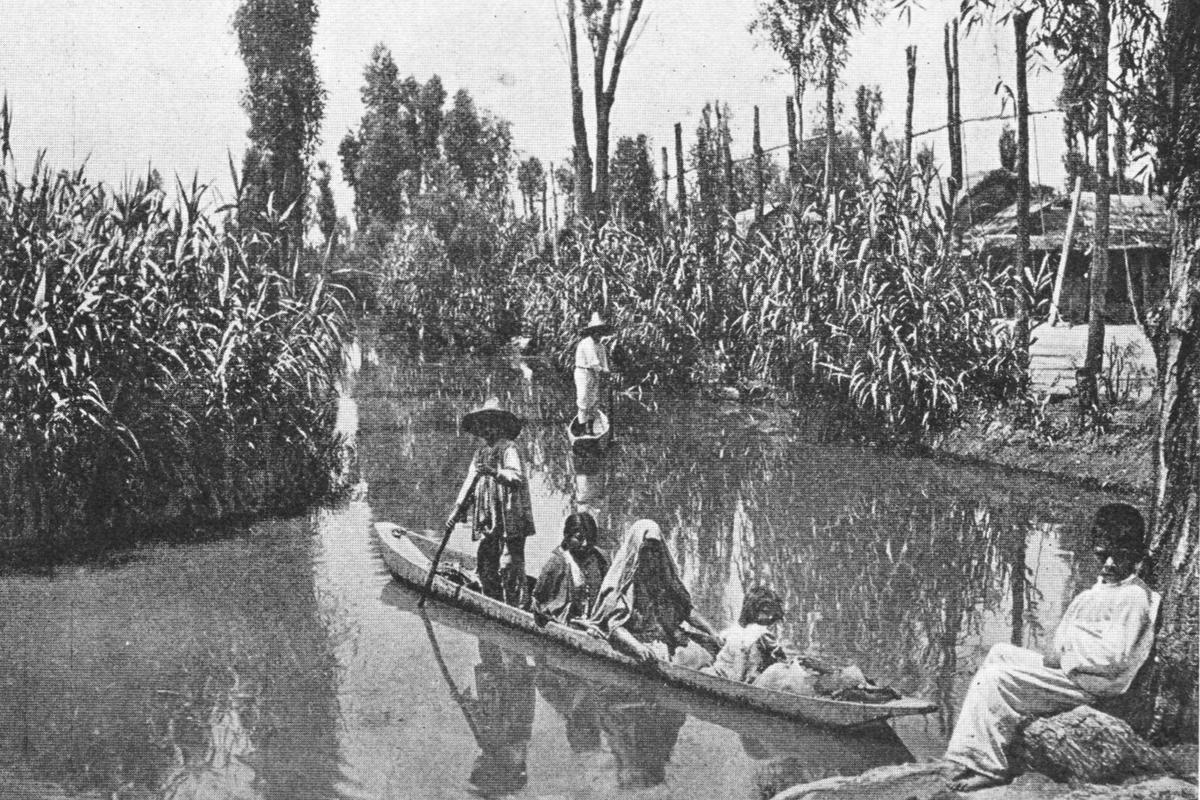 The Valley of Mexico is a highlands plateau, located in the Trans-Mexican Volcanic Belt. It contains most of the Mexico City Metropolitan Area. Hydrologically, it is an enclosed valley containing the bed of five lakes which are currently extinct. The lakes did not have a natural outlet for water to flow, leading to several floods in the area. The Spaniards decided to drain the former lake-beds to make the city safer, thus transforming the lacustrine landscape into a valley. 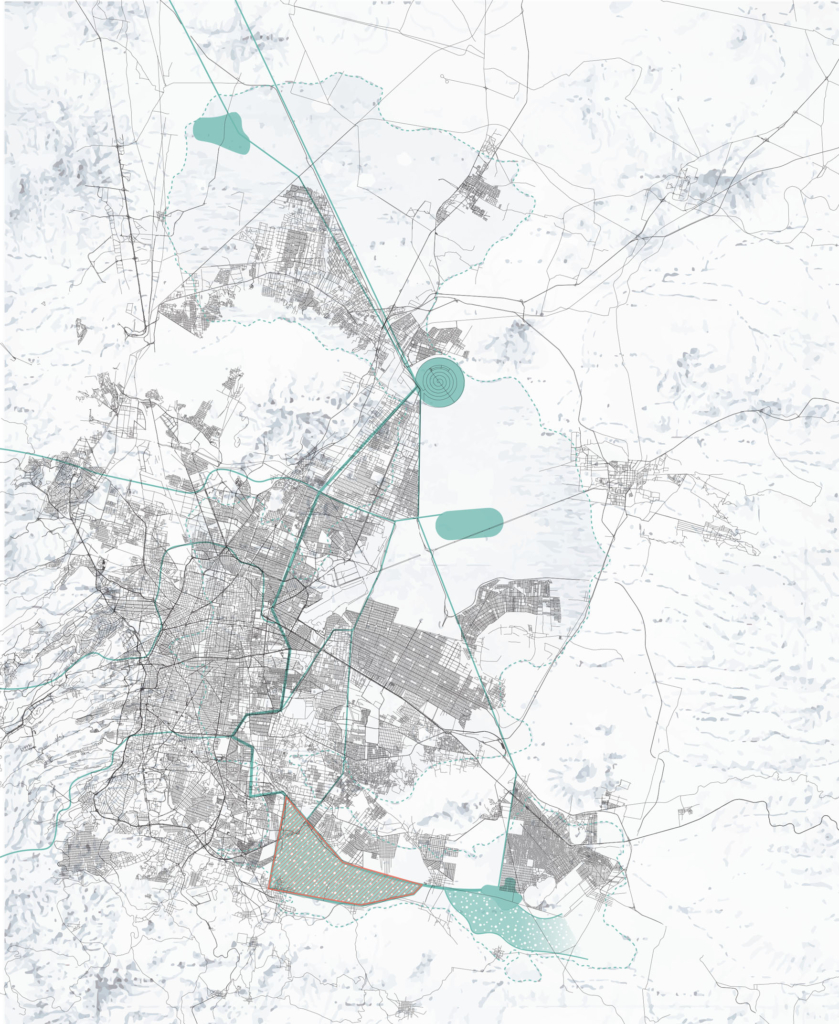 Chinampas are still present in the southern part of the Valley of Mexico, on the canals of Xochimilco. Although many of these floating gardens were constructed and thoroughly tended to from the Post-Classic period through the Spanish conquest, many of these plots of land still exist and are in active use thanks to present-day farmers that have revived this traditional water system. In addition, the traditional way of cultivation and the form of transport have attracted many tourists who want to experience the Chinampas, through piragüas (traditional canoes) especially to see flower nurseries.

Before the Aztecs, early Mesoamericans built floating farms that provided fertile land for crops near modern-day Mexico City. In fact, these farms, or “chinampas” still have some of the country’s most fertile land. But because they are costly to maintain, some local farmers are abandoning the chinampas for better-paying work in the city. That’s where Lucio Usobiaga comes in. He’s the co-founder of Yolcan—a nonprofit aimed at preserving the chinampas. By connecting farmers with more than 50 chefs across the country, Yolcan is not only helping preserve the history of the chinampas, he’s helping give Mexico’s chic restaurants its choicest ingredients, as well.
https://www.youtube.com/watch?v=HJiTRh4EeTs&feature=emb_logo

When the Aztecs settled an island in the middle of Lake Texcoco (where Mexico City stands today), they built these floating gardens to feed their growing city of Tenochtitlan. The chinampas were an innovative solution given the lake-based location: They built artificial islands using wooden stakes and reeds in a grid pattern, accessed by canals, on the shallow lake bed. The method proved to be very efficient and fertile.

However, when the Spanish arrived and defeated the Aztecs, they drained the lakes and filled them in, destroying the chinampas. Only one lake remains from the original five and its canals mostly dried up in the 1950s, almost dooming the future of the chinamperos (the farmers who tend to these floating crops).

The Aztecs used stunning floating gardens — otherwise known as chinampas — to grow their crops without harming the environment.

Chinampas were created by piling mud and decaying plants into small stationary islands on top of which the farmers would sow maize, beans, chilies, squash, tomatoes, and greens. Farmers would also grow the colorful flowers used in a variety of their ceremonies. To stabilize the islands, sturdy reeds were bound together and used to both border each chinampa and to help anchor it to the ground.

The dredging of the mud cleared the way for canals and naturally reinvigorated the nutrients in the soil that fed their crops. The resulting system of canals and gardens created a habitat for fish and birds, which helped maintain the health of the ecosystem and also provided additional sources of food.

Chinampas are sustainable, but they aren’t self-maintained. Farmers had to construct a series of systems and processes to keep their people and the land healthy. Drainage systems were added to avoid flooding during the rainy season.

To fertilize the gardens, they developed a waste system to collect human excrement from the cities and spread it over their crops. The result was more than just flourishing crops: The chinampas actually helped prevent waste from entering and poisoning the water supply.

The fact that Aztecs found a way to turn unworkable swampland into a flourishing garden is an accomplishment in itself. Even more impressive is the amount of organized manpower, planning, and utilization of their resources required to make their idea a reality. 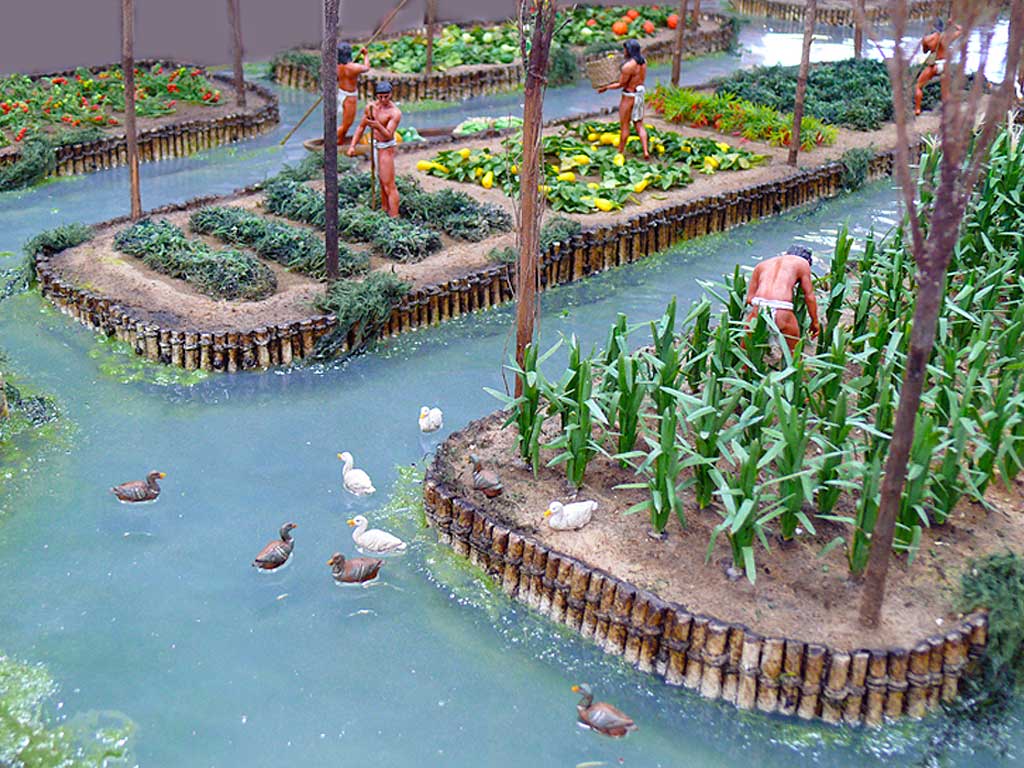 The chinampas are essentially floating gardens found on the southern side of Mexico City in the Lake Xochimilco region known for its canals. They’re built from the mud that’s scraped from area swamps or lakes, usually in a rectangular pattern with the corners marked by posts and bordered by ahuejotes, a local willow seen above that’s abundant and fast-growing. The willow “fence” establishes the chinampa while also protecting it from winds and some pests, as well as providing a natural trellis system to support cultivated vining plants.

Chinampas also deliver significant ecosystem benefits as the planet’s growers seek to avoid the worst impacts of climate change. The gardens support biodiversity and sequester greenhouse gases, although there is some evidence that the soils and techniques tend toward higher oxygen consumption levels that offset some gains.

Growing flowers on a chinampa delivers some of the highest economic returns, but farmers using them in Mexico are raising beans, tomatoes and edible greens among the 40 or more vegetables identified. The chinampas are often suitable for small animal production too, and create an environment where chickens are commonly at home but sheep, swine and other species also coexist within them.

The Spanish, led by conquistador Hernando Cortés, arrived in what is now Mexico in 1519. They were looking for gold, and the gifts from the Mexica ruler, Motecuhzoma, proved that gold was present. Upon arriving in Tenochtitlan, Cortés took Motecuhzoma prisoner and attempted to rule on his behalf, but this did not go well, and Cortés fled the city in June of 1520.