Ramaphosa has placed minister of health Zweli Mkhize on special leave while the Special Investigative Unit (SIU) conducts investigations into allegations of corruption at the health department.   This period of special leave will enable the minister to attend to allegations and investigations concerning contracts between the Department of Health and a service provider – Digital Vibes. 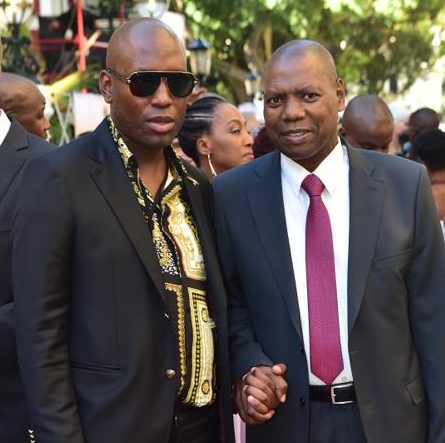 The Digital Vibes corruption scandal involving millions of rand that was paid to Health Minister Zweli Mkhize’s close allies has taken an unexpected turn, with the company’s director and owner laying charges of fraud and embezzlement against Tahera Mather and Naadhira Mitha.    Digital Vibes was awarded a R150m contract by the Department of Health for communications work.

The deal had initially focused on the National Health Insurance scheme but was later expanded last year to include Covid-19 communications work for the department.   Digital Vibes is accused of inflating prices and doing work that the department could do internally. It was also alleged that a house owned by Mkhize’s family trust had renovations financed by the company and that it also purchased a vehicle for Mkhize’s son, Dedani.

In an affidavit deposed by Radha Hariram on May 7, 2021, at the Norwood police station, she talks about how she has known the pair for many years.

The public protector’s spokesperson, Oupa Segalwe, said the proceedings resulted from Mkhize repeatedly ignoring a subpoena to appear before Mkhwebane concerning an investigation into allegations that the department had failed to implement recommendations from the clinical associates national task team in 2017.

The Special Investigating Unit is investigating this matter and the president awaits a report on the outcome of this probe.    Minister of tourism Mmamoloko Kubayi-Ngubane will serve as acting minister of health until further notice.   Mkhize has been under scrutiny after the health department awarded a R150 million contract to Digital Vibes, a company controlled by two of Mkhize’s former aides, to help communicate the government’s response to the coronavirus pandemic.   The money was largely wasted and proper procurement processes weren’t followed, news website Daily Maverick reported.

Digital Vibes, the communications firm at the centre of an alleged corruption storm over a R150-million contract from the Department of Health (DoH), made at least two payments to a contractor for maintenance and repair work at a Johannesburg property owned by Health Minister Zweli Mkhize’s ZLM Trust.

Digital Vibes also transferred at least R300,000 to a company owned by Mkhize’s son.   The latter payment was made in May 2020 to All Out Trading, an entity whose sole director is Dedani Mkhize (33).     Mkhize Jr did not respond to queries sent to him and to his wife. His cellphone appeared to be switched off when we tried to call him for comment.     Mkhize and the DoH were questioned about the payments for the property maintenance bills, but they did not provide feedback.

During the period in 2020 during which Digital Vibes made these transfers, almost all of the money the company received came from the DoH.

“All matters that have related to the upkeep, maintenance etc were always reported to me. Just like any household we have attended to a few minor maintenance, electrical or plumbing issues over the years, but I have never requested Digital Vibes or any of its representatives to make a single payment towards such upkeep,” stated Mkhize.

The Health minister said that he was well aware that the public was disappointed.

“The negative discourse has not only had an impact on me, but it is also an impact on my family, but most of all, also it has tainted the teamwork of our government that is led by President Ramaphosa, in our continued efforts to fight COVID-19,” said Mkhize.

As revelations around the Digital Vibes contract continued, including assertions that the company bought his son a bakkie, he said that he spoke to his family about it and they were in agreement that these funds need to be returned.

Minister of Health Dr Zweli Mkhize has apologised for the disruption caused by the irregular Digital Vibes contract, saying he played no role in awarding the tender and did not benefit from it. Mkhize briefed the media on 8 June 2021 just minutes before the Presidency announced that President Ramaphosa had placed the minister on special leave while the SIU conducted a probe into the matter.

An independent forensic investigation has found irregularities in the awarding of a R150m contract by the national Department of Health to an obscure communications company run by Health Minister Zweli Mkhize’s former staff, reports MedicalBrief.

After initially denying that there was anything untoward, the DoH now admits to “glaring irregularities”.

The investigation found that the tender contravened the Public Finance Management Act.

There were irregularities in the tender bid process, ranging from inconsistencies in the bid committees to a lack of disclosure of conflict of interest. An amount of R37m awarded to the company Digital Vibes constituted fruitless and wasteful expenditure, and that R35m was awarded for work on COVID-19 before its contract was expanded.

The matter was first exposed by the Scorpio investigative journalism unit in Daily Maverick, outlining how Digital Vibes had been appointed in 2019 through a closed tender to provide communication services for the government’s National Health Insurance (NHI) rollout, with the scope of the work extended in March 2020 to include communications services for COVID-19. Digital Vibes’ key players were Mkhize’s former personal assistant, Tahera Mather, and his former secretary, Naadhira Mitha.

A parallel investigation into the contract by the Special Investigation Unit (SIU) is still under way.

This week, Mkhize released a summary of the forensic investigation report, saying he had been legally advised not to disclose the full details for fear of jeopardising the remedial action being undertaken. The is included disciplinary action against implicated staff and an investigation into possible fraud and corruption, he said.

In his statement (see below) Mkhize stressed that the DoH had appointed tax assurance advisory firm Ngubane to investigate the contract after concerns were raised about it by the Auditor-General in December 2020.

Mkhize said he was not involved in the awarding of the contract to Digital Vibes and had not influenced the appointment of employees or consultants to the company. He denied Mather and Mitha were close associates, saying they were “comrades” rather than “personal friends”.

“From the outset, I wish to publicly state that the outrage, anger, questions, comments, expression of disappointment and disgust by members of the public with what has been reported in the media regarding this Digital Vibes contract is well justified. It is the very same red flags that were highlighted by the Auditor General in December that made me request the Director General to not just hand over this investigation to internal audit but to urgently appoint a firm of investigators who would have the necessary capacity and independence to scrutinise all the documents related to this contract.”

Talevi writes that there’s nothing like being lectured on accountability and “due process” by a department that doesn’t understand the concepts. “Had Mkhize any notion of the idea, he would have taken temporary leave while the Special Investigating Unit concludes its probe .. The allegations, if proved true, could be fatal for Mkhize’s career, in part because they involve irregular spending of money meant to alleviate the most punishing health crisis to face SA, at a time where Mkhize himself is the figurative face of the country’s response.”

“It makes it worse for Mkhize that the Digital Vibes obscenity comes amid new allegations of how he, while MEC for finance in KwaZulu-Natal in 2005, helped transfer millions from the state-owned Ithala Bank to pay for Jacob Zuma’s criminal defence in the arms deal case. Mkhize was never the most comfortable of President Cyril Ramaphosa’s ministers. His longevity, let alone his ethics, now looks decidedly questionable.”