A spectacular fireball (meteor) exploded over northern Balkans today at 10:34 local time (09:34 UTC), Feb 28th. The event was seen and heard from northern Italy, Slovenia, Croatia, and Austria. There are numerous reports of a loud sonic boom with the accompanying shockwave, strong enough to be registered by the seismographs as an earthquake! It is possible some pieces of the object survived the atmospheric entry. 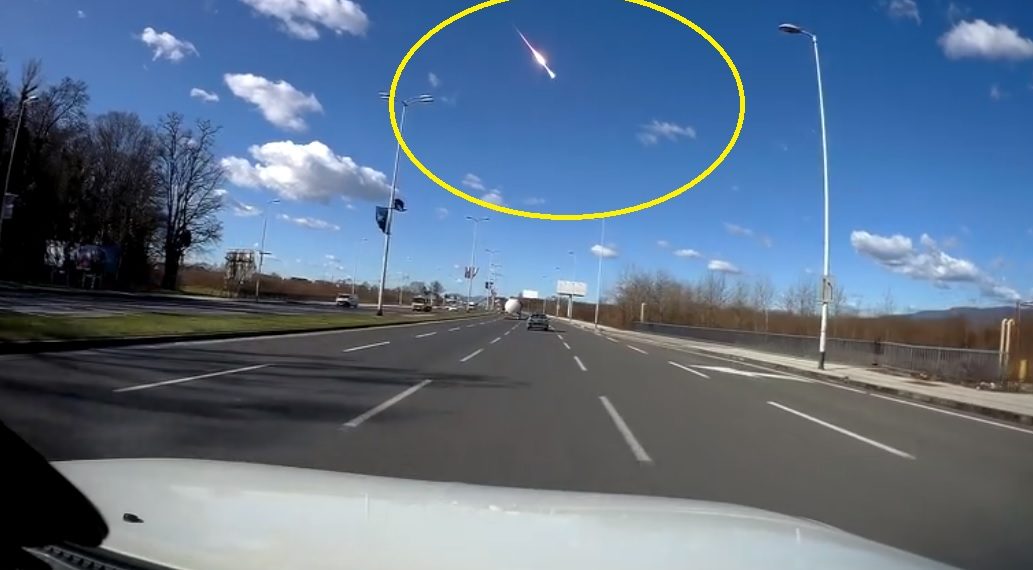 Observers who saw the explosion were reporting that it looked like a fireball at night, only it was daytime with a bright flash of light, followed by a loud explosion. For a while, there was a larger yellowish mass in the cloud (probably the meteor was still burning), with then only the smoke cloud remaining. Some of the observers also reported shaking windows during the accompanying shockwave.

Although some residents initially thought it was an airplane breaking the sound barrier (sonic boom) or an earthquake, the Croatian Astronomical Union (CAU) confirmed it was a bolide (fireball meteor) – an extremely bright meteor.

The sonic boom was registered in capital Zagreb at 09:34 UTC, three minutes after the visual spectacle. The sound lasted for several seconds and was heard across northern Croatia.

According to the CAU, the meteor exploded at a height of about 30 km (18.6 miles) above the ground. It is quite possible that some pieces survived atmospheric entry, but it’s still unclear where they might have landed. There are some unofficial reports, a piece of the object was found in the city of Koprivnica, northeast Croatia.

Seismographs of both Slovenian and Croatian meteorological services (ARSO, DHMZ) clearly registered the shock waves! It was probably a breakthrough of the sonic boom caused by the meteor explosion.

A spectacular fireball (meteor) exploded over northern Balkans today at 10:34 local time (09:34 UTC), Feb 28th. There are numerous reports of a loud sonic boom with the accompanying shockwave, strong enough to be clearly seen on the seismographs as an earthquake! Video by Tomislav Čar, posted with permission.

TUCSON – If you looked up at the sky early Wednesday morning, you may have noticed something spectacular. And it definitely wasn’t a bird or a plane.

On Wednesday, YouTuber S Paris captured an object zooming through the sky on his dashcam at around 5:30 a.m. In the video’s description, S Paris believes the object that came down is a meteor.

With the sun still down, the video showcased a clear visual of the meteor flying through the sky.

According to YouTuber, the video was captured on the southeast side of Tucson.

VIDEO: Meteor captured falling through Tucson sky on southeast side

During this period the moon reaches its new phase on Sunday February 23rd. At this time the moon will lie near the sun and will be invisible at night. The moon will enter the evening sky later in the week but will not interfere with meteor observing. This is the best time of the month to view meteor activity as the moon will not be a factor at all.

The estimated total hourly meteor rates for evening observers this week is near 3 no matter your location. For morning observers the estimated total hourly rates should be near 8 as seen from mid-northern latitudes (45N) and 13 as seen from tropical southern locations (25S). The actual rates will also depend on factors such as personal light and motion perception, local weather conditions, alertness and experience in watching meteor activity. Note that the hourly rates listed below are estimates as viewed from dark sky sites away from urban light sources. Observers viewing from urban areas will see less activity as only the brighter meteors will be visible from such locations.

The radiant (the area of the sky where meteors appear to shoot from) positions and rates listed below are exact for Saturday night/Sunday morning February 22/23. These positions do not change greatly day to day so the listed coordinates may be used during this entire period. Most star atlases (available at science stores and planetariums) will provide maps with grid lines of the celestial coordinates so that you may find out exactly where these positions are located in the sky.

A planisphere or computer planetarium program is also useful in showing the sky at any time of night on any date of the year. Activity from each radiant is best seen when it is positioned highest in the sky, either due north or south along the meridian, depending on your latitude. It must be remembered that meteor activity is rarely seen at the radiant position. Rather they shoot outwards from the radiant so it is best to center your field of view so that the radiant lies at the edge and not the center. Viewing there will allow you to easily trace the path of each meteor back to the radiant (if it is a shower member) or in another direction if it is a sporadic. Meteor activity is not seen from radiants that are located below the horizon. The positions below are listed in a west to east manner in order of right ascension (celestial longitude). The positions listed first are located further west therefore are accessible earlier in the night while those listed further down the list rise later in the night.