Shamila Batohi (NPA head) describes a criminal justice system buckling in the face of rising crime and dismally low prosecution rates.   South Africa’s Law enforcement  has collapsed.   Aside from the fact that fewer criminals are being caught, the country’s regional and district courts appear to have ground to a standstill. 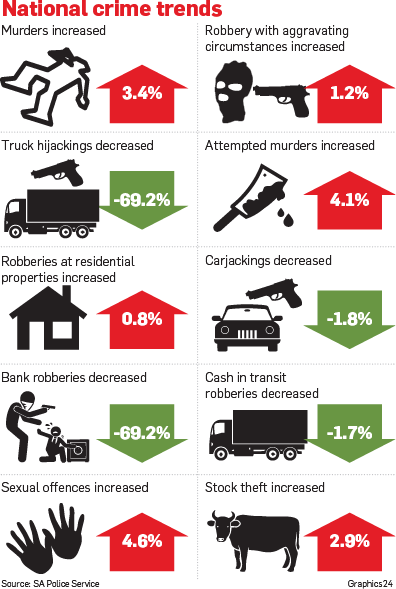 To make matters worse, there was a sharp decrease in new cases that reached the NPA in the past financial year, dropping from 888 053 cases to 792 895 – a 10.7% decrease.    Poor investigations and botch-ups by prosecutors have resulted in a historic low point: an astronomical 103 760 criminal cases have simply been withdrawn, 9% more than in the previous year.   And, to crown it all, courts succeeded in finalising 14% fewer cases, despite an increase in plea agreements and alternative dispute resolutions.

The situation is so chaotic that the country’s criminal court sat for only three hours and four minutes a day, on average – two minutes more than in the previous year.  According to the NPA’s annual report, which was submitted to Parliament on Tuesday, the agency did, however, manage to increase its success rate for certain crimes.

For murder cases, it managed to secure a conviction rate of 78.4% and for sexual offences, the conviction rate increased from 65.8% in 2013 to 74.4% this year.   But advocate Shamila Batohi, the national director of public prosecutions, conceded that these successes were misleading.

An analysis of the annual reports of the SA Police Service (SAPS) and the NPA, conducted by City Press’ sister publication Rapport – in which cases reported to the police are compared with the NPA’s prosecution and conviction rates in the same period – shows the huge imbalance as follows:

Batohi told MPs that it was understandable that people did not feel safe.

“We dare not applaud ourselves for the high conviction rate, while the prosecution rate is so low,” she said.   “If it is true that crime is increasing, as the SAPS report shows, then the two departments have to come together to talk about the reasons why there are fewer corruption cases in the criminal justice system.

“The NPA also gets the feeling that the country is busy losing the fight against organised crime,” Batohi told Parliament’s portfolio committee on justice and correctional services.   The NPA’s report suggests that the institution has been entirely hollowed out in respect of expertise and resources.

The agency has just a handful of prosecutors left who are able to handle complex commercial cases.    Even though the Special Investigating Unit (SIU) reported 293 cases of corruption and fraud at municipalities to the NPA, the prosecuting authority could only handle nine of them.

Not a single prosecutor’s post has been filled since 2016 because there is no money.

The NPA has 4 408 posts, of which 1 142 – or 25.9% – are currently vacant.    The personnel are also increasingly using the NPA’s health and wellness programme because fewer employees have more work to do, according to the report.

The report emphasises the critical shortage of budgetary funding in the NPA, saying it had an overexpenditure of R77 million.   Morale among prosecutors is low, the report warns.   Batohi said the NPA was directing its focus on securing prosecutions in corruption cases in order to help restore investor confidence.

In the 2018/19 financial year, the NPA convicted only 210 state officials on corruption charges.

It also managed to convict 17 people in the private sector of corruption involving more than R5 million.

The department of justice announced last week that it had appropriated R20 million for the NPA to enable the agency to acquire the services of four top advocates who would help secure the prosecutions of those involved in state capture.