Ethiopian Prime Minister Abiy Ahmed Ali on an Official Visit to South Africa on invitation of President Cyril Ramaphosa.   Cyril Ramaphosa has given assurances to Ethiopian Prime Minister, Abiy Ahmed that Ethiopians living in South Africa will be protected against any forms of attacks in the country.   Ramaphosa was briefing the media following a bilateral and diplomatic relations meeting with Ahmed at the Union Buildings in Pretoria on Sunday.

HOW do you explain it is always or most of the time black on black violence in South Africa, blacks attack others, blacks attack and kill white farmers, indians or coloureds.   More than 50 murdered a day – who murdered whom?   Where are all the killers, investigations by police , court cases,  funerals of those 50 murders a day and their families.   Same happened in Zimbabwe as well there is also B-BBEE against only the white population.   Are the blacks scared of the whites then?

Responding to a question from an Ethiopian journalist about last year’s attacks on foreign nationals, Ramaphosa said the incidents were regrettable.

“We seek to protect all people who live in our country not only South Africans but everyone, wherever they come from. That is the stated approach and policy of our government. And late last year, we went through a rather difficult situation and we regretted that. What we want to say to the Ethiopians who are here in South Africa is that they should rest assured that the South African government will protect Ethiopians, will protect all people of our country against all forms of attacks.”
*

President  Ramaphosa has agreed to assist in facilitating talks to resolve an impasse between Ethiopia and Egypt over the massive Nile dam project.

Ahmed, who was on a two-day state visit in the country, said that Ramaphosa as the incoming chair of the African Union could play an important role in ensuring a peaceful resolution is found.

Egypt is blaming Ethiopia for the failure of the latest round of talks on the construction of the dam which is a critical issue for Cairo as it wants to protect its main freshwater source for its large and growing population.

Responding to a question about a way forward on the Nile dam project, Prime Minister Ahmed said that it is crucial that a peaceful resolution is found.

“The current request for President Ramaphosa as he is a good friend for both Ethiopia and Egypt also as incoming AU chair he can make a discussion between both parties for us to solve the issue peacefully because peace is a foundation for everything and here in Africa without having peace we can’t realise our vision of development and growth.”

The two countries also signed one agreement and two memorandums of understanding.

Ramaphosa is set to assume the rotating Africa Union chair position this month, taking over from Egyptian President Abdel-Fattah El-Sisi. This also coincides with South Africa’s third term as the non-permanent member of the United Nations Security Council.

PICTURES: Welcome Ceremony in honour of HE Ethiopian Prime Minister Abiy Ahmed Ali at the Union Buildings Courtyard in Tshwane. HE Prime Minister Abiy is on an Official Visit to South Africa on invitation of HE President @CyrilRamaphosa . #EthiopiaInSA #BetterAfricaBetterWorld 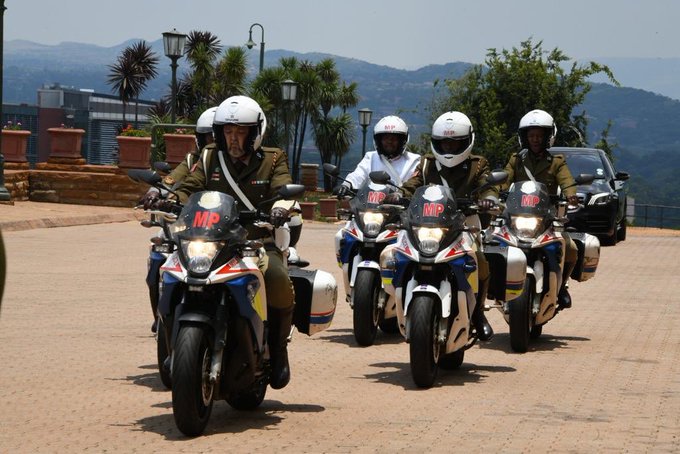 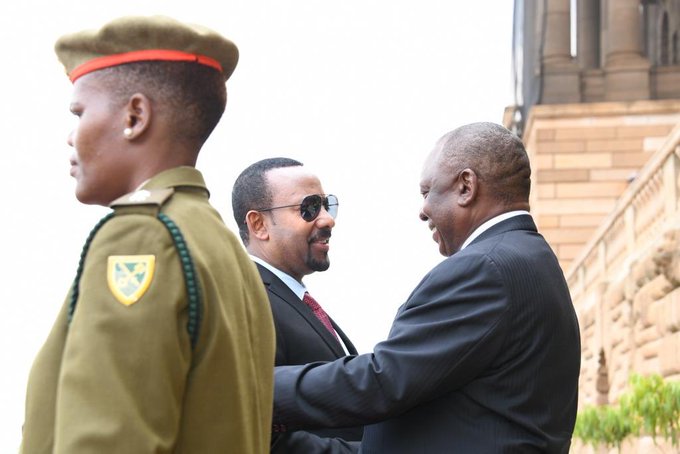 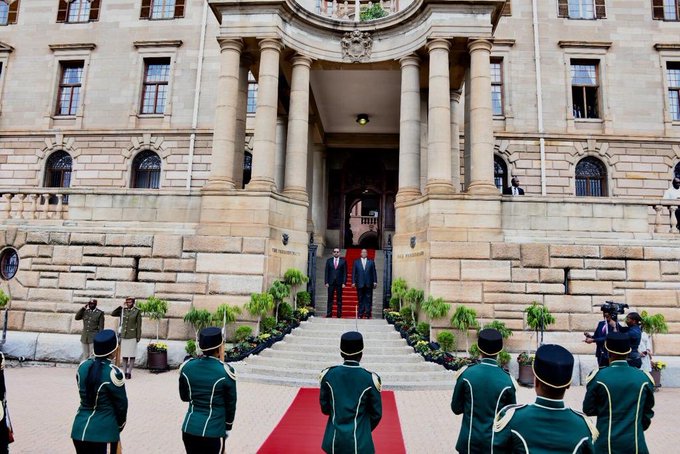 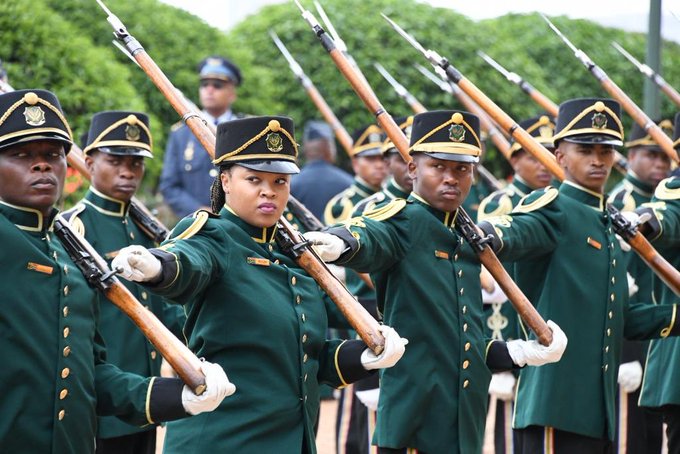 He also made an announcement that the two countries have signed an agreement to waive visa requirements for holders of diplomatic and official passports. Two memorandums of understanding were also signed.

“ That is expected to ease the travel of officials between our two nations, the memorandum of understanding on co-operation in the field of tourism will extend our partnership to a sector of great importance to both countries due to employment opportunities that are created and the foreign currency generated through tourism we also welcome the memorandum on co-operation in the field of health which is vital area that is of great importance to the citizens of both countries especially the young, the old and infirm.”

“Ethiopia is now opening up to private capital in telecommunications, energy, logistics and other industries which South African investors have great experience on these fields , we also discussed the way in which we could boost our trade volume between our two countries considering the great potential that exists particularly through the opportunities that the African continental free trade area provides for bilateral and intra-regional trade.”

The Nobel Peace Prize winner, Abiy Ahmed, was warmly welcomed by Ethiopian nationals at the Wanderers Stadium in Johannesburg on Sunday.

The Ethiopian Prime Minister and Nobel Peace Prize laureate Abiy Ahmed is expected to meet President Ramaphosa today. The Prime Minister arrived in the country on Friday and was one of the dignatories at the ANC’s 108th anniversary celebrations. Our Foreign Editor, Sophie Mokoena from the Union Buildings to tell us more.

Ethiopian Prime Minister Abiy Ahmed has called on President Cyril Ramaphosa, as the incoming chair of the African Union, to intervene in the impasse between Ethiopia and Egypt over the hydro- electric dam on the Nile. Egypt fears the massive dam will affect the water supply to it. Ahmed has been in South Africa since Friday and attended the ANC 108 January 8 celebration on Saturday. The two leaders held talks at the Union Buildings in Pretoria on Sunday.

The Ethiopian Prime Minister and Nobel peace prize winner, Abiy Ahmed, was warmly welcomed by Ethiopian nationals at the Wanderers Stadium in Johannesburg on Sunday. After having spent the morning with President Cyril Ramaphosa, Ahmed who is on an official visit to South Africa, highlighted the plight of Ethiopian nationals living the country. Ramaphosa will soon take up the chairmanship of the African Union.