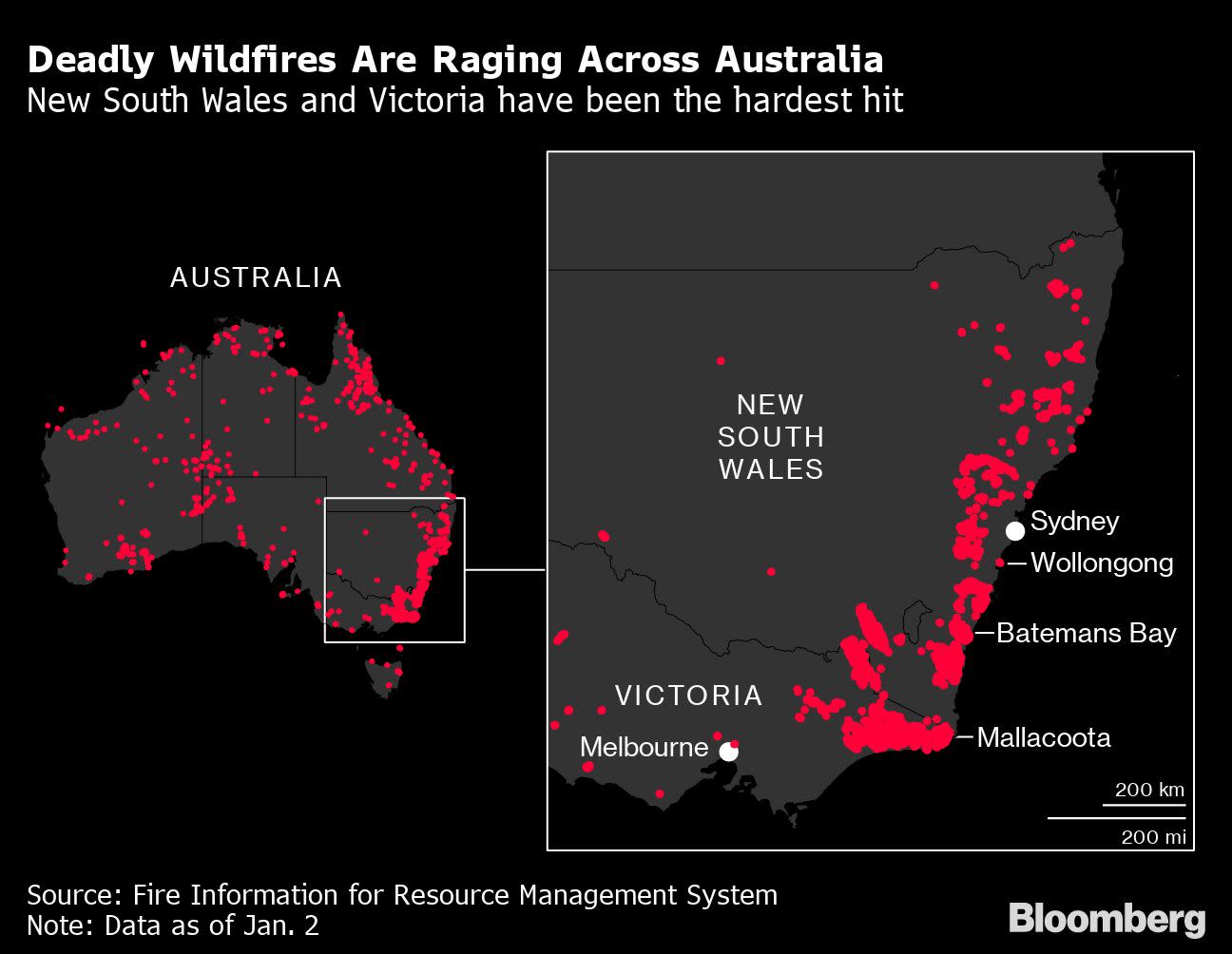 Victoria Premier Daniel Andrews on Thursday declared a state of disaster for several areas, and authorities are calling for the evacuation of large areas of the state. Andrews said on his Twitter account that 28 residents of the state are missing.

The fire season in Australia is far from over, and already it is shaping up to be one of the most intense in the country’s history.

“The intensity, the scale, the number, the geographical range, the fact that they’re occurring simultaneously, and the sorts of environments that are burning are all extraordinary,” David Bowman, a professor of pyrogeography and fire science and the director of the Fire Centre Research Hub at the University of Tasmania, tells TIME.

“We’re in the middle of a war situation…mass evacuations, the involvement of the military, hugely exhausted firefighting campaigns, it’s difficult to explain.”

The bushfires have caused at least 19 deaths and dozens of people are missing. Hundreds of homes destroyed have been destroyed. The military has deployed ships and aircraft to bring supplies to towns ravaged by the fires, and to evacuate residents who were cut off by the flames.

Starting Saturday, conditions are expected to worsen again, with hot weather that will likely intensify the fires.

Here’s what to know about the crisis that’s unfolding in Australia.

How extensive are the fires?

About 12.35 million acres of land have burned across Australia, according to the Associated Press. By comparison, wildfires in California in 2018—which the California Department of Forestry & Fire Protection says was “the deadliest and most destructive wildfire season on record” in the state—burned an area of less than 2 million acres.

A map maintained by researchers shows large areas of Australia were burned in 2019, with much of the damage in the last month.

Bushfire risk is currently the highest in New South Wales and Victoria, the most populous states, during Australia’s summer, which runs from December to February, but a state of emergency had already been declared in New South Wales in mid-November over the fires this season. In southern Australia and Tasmania, fire season continues into the fall.

Owen Price, an Associate Professor Centre for Environmental Risk Management of Bushfire at the University of Wollongong, tells TIME that approximately 30% of the forest in New South Wales has been burned, but that may increase to around 50% this weekend with the weather forecast.

At least 200 fires were burning in Australia as of Friday. This week alone, 10 deaths have been confirmed in Victoria and New South Wales.

A fire tracker map maintained by researchers in Western Australia shows fires burning across the country, with fires raging on the southeast coast of Victoria.

In the resort town of Mallacoota, where earlier this week some 4,000 residents were forced to flee to the shores as winds pushed a fire through the area, the military is assisting with evacuations.

Australia’s Minister for Defense posted photos on Twitter of Mallacoota residents being evacuated.

Victoria’s Bureau of Meteorology posted pictures of hazy skies, and said that visibility at an airport in the city of Albury, on the border of New South Wales and Victoria, was as low as approximately 1,600 feet.

The fires are going to get worse

Although conditions had cooled in Australia this week, more hot weather is expected to exacerbate the crisis over the weekend. Victoria’s Bureau of Meteorology predicted “severe” and “extreme” fire danger ratings for several parts of the state due to hot temperatures and changes in the wind.

Bowman, the researcher in Tasmania, says that the scale of fires already burning means that when the weather heats up, fires intensify quickly.

“Every time you get the weather set up, as we’re entering in the next 24 hours, the fires just explode again and you have even bigger fires and new fires and new fire fronts and new lightening strikes…it’s a diabolical ratchet.”

Bowman says that there are other bushfire prone areas that may be in danger.

“Here in Tasmania, the whole of the east coast could blow up. There’s a big chunk of forest around Melbourne, tall forests around Melbourne…in southwestern Australia there’s still plenty to burn,” Bowman says.

“The door is open and we have no idea where this is going to end,” he says. “Most of Australia’s vegetation is highly flammable, the fire has plenty to go, it has capacity to keep burning, it’s not going to run out of fuel.”

What role is climate change playing?

Experts say that climate change is contributing to the historically intense fire season.

“Climate change is supercharging the fires,” Lesley Hughes, a professor of biology at Macquarie University and a Climate Councillor at the Climate Council of Australia, tells TIME. “It has affected the ongoing decline of rainfall and therefore impacts of the current drought that we’re experiencing, especially in southeastern Australia” she says.

Hughes adds that climate change may also be causing more frequent and severe heatwave conditions in the country. The year 2019 was the hottest on record for Australia, with the temperature reaching approximately 2.7 degrees Fahrenheit above the long-term average, according to Australia’s Bureau of Meteorology.

“When you have the combination of very hot, dry days, strong winds, and very dry fuel, if you get any sort of spark, you have the conditions for a very bad bushfire,” Hughes says.

Despite the bushfire crisis, Australia’s Prime Minister Scott Morrison has argued that there is no direct link between Australia’s greenhouse gas emissions and the severity of the fires burning across the country. He has, however, acknowledged that climate change could be impacting bushfires and the length of the fire season. Australia is one of the highest per capita emitters of carbon dioxide in the world, according to Climate Analytics, an advocacy group that tracks climate data.

Hughes says that the government’s stance on climate change is hurting its ability to respond to the crisis.

“If you don’t accept the science—that’s been saying for at least 30 years that these are the sort of conditions we should be preparing for and mitigating against—then you come to a disaster like this completely unprepared.”

1 January 2020
Firefighters have described the speed and intensity of the latest fires as unbelievable, even for eyewitnesses. But astonishing video taken by a crew trapped on the south coast shows exactly how terrifying a firestorm can be.

Military has arrived in Victoria to begin evacuating residents trapped by fire as a ‘State of Disaster’ is declared.

Madeleine Kelly, 17, and her family were among people staying in Rosedale, a tiny coastal town 300km south of Sydney, when they were forced to flee to the beach ahead of huge bushfires on New Year’s Eve. The fires destroyed numerous properties in the town as horrified onlookers watched. The fire’s onslaught was halted when the wind changed, but people remained on the beach for hours afterwards before they could be evacuated to Moruya showgrounds by bus through the devastated town

Evacuations have begun and relief supplies have arrived for thousands of Australians stranded in fire-ravaged towns. Eight people have been confirmed dead this week in New South Wales and Victoria, where 17 people are missing.

At least 200 people have been evacuated from a Kangaroo Island caravan park as a dangerous fire broke control lines and sparked a fresh emergency.

*
3 January 2020
Prime Minister Scott Morrison has faced the red hot fury of angry locals in the bushfire-ravaged town of Cobargo. The prime minister says he doesn’t take the criticism personally, but a fellow Liberal MP says he got what he deserved.