The Amathole District Municipality is a Category C municipality situated in the central part of the Eastern Cape. It stretches along the Sunshine Coast from the Fish River Mouth and along the Eastern Seaboard to just south of Hole in the Wall along the Wild Coast. It is bordered to the north by the Amathole Mountain Range. 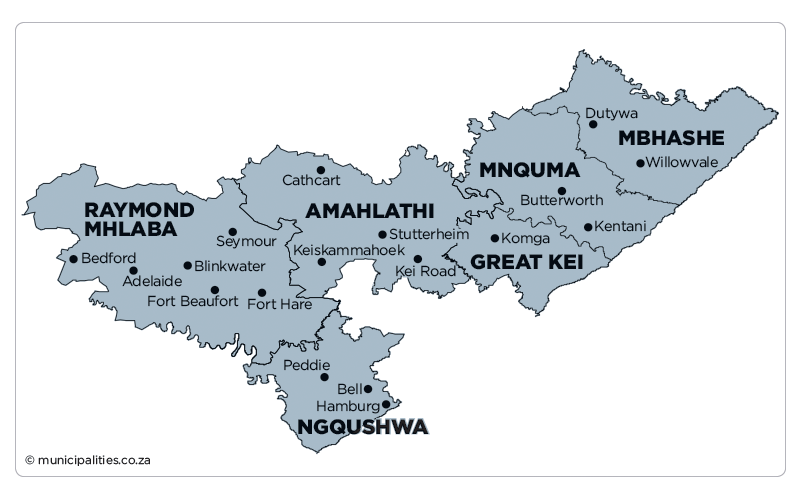 The municipality is comprised of six local municipalities: Mbhashe,  Mnquma, Great Kei, Amahlathi, Ngqushwa and Raymond Mhlaba. Four heritage routes have been developed that are named after Xhosa kings and heroes. They are the Maqoma Route, the Makana Route, the Sandile Route and the Phalo Route. These intertwine with the other tourism routes located within the district, namely the Sunshine Coast Route, the Wild Coast Route, the Amathole Mountain Escape Route and the Friendly N6 Route.

OVERVIEW
Description: The Amahlathi Local Municipality is a Category B municipality situated in the Amathole District of the Eastern Cape Province. It is bordered by the Chris Hani District to the north, Buffalo City Metro to the south, Mnquma and Great Kei to the east, and Raymond Mhlaba to the west. It is an administrative area, and one of six municipalities in the district.

Amahlati is an isiXhosa name that means ’a place where many trees are grouped together, a forest’. Forests are a key feature of the area.

Auctioning municipal vehicles, irregularities in awarding road construction tenders and allegations of a former municipal manager building his house using municipal resources, are among a long list of allegations being investigated by National Treasury in the province.

Treasury experts descended on the province last month at the request of co-operative governance and traditional affairs (Cogta) MEC Fikile Xasa, and hit the ground running, investigating irregularities and alleged corruption and fraud in 14 troubled municipalities.

Last month the Dispatch reported that National Treasury was instituting the forensic investigations into 14 municipalities which were rocked by claims of financial irregularities, corruption and fraud.

The controversial 2018 auction of Enoch Mgijima vehicles is among projects and areas that the investigators are looking into. In June 2018, 44 municipal vehicles including TLBs, graders and bakkies were auctioned off to try and repay a R21m debt the municipality owed Milowo Trading Enterprise for six years for the construction of a community hall in Sterkstroom.

The municipality has recently seen the ousting of its municipal manager Chris Magwangqana after the council adopted a report from Bhisho that implicated him in a litany of charges, including hiring staff for posts not in the budget, and leading to the municipality being put under administration.

Other allegations being investigated include a municipal infrastructure grant-funded hall project, legal expenditure and a performance audit on the supply chain management unit. Cogta spokesman Mamnkeli Ngam said that the investigators were probing a variety of allegations.

“They flow from petitions that were submitted to the MEC by communities from these municipalities. The MEC invoked section 106 and conducted preliminary investigations. He was able to unearth some information that seeks to corroborate these allegations by the communities.”

Ngam said the reports had been presented to municipal councils and the MEC then approached finance minister Tito Mboweni to seek specialist capacity to conduct forensic investigations into the allegations.