At least two people were shot in Blairgowrie, Johannesburg, when police and vehicle-tracking agents exchanged fire with suspected hijackers early on Friday.  Resident Bianca Sibiya of Kangnussie Road said she had been roused by the sound of gunfire.  “I was asleep and the first gunshot had me bolt upright. I ran to my window and I could see though my gate. I could see the flash of the muzzle of the gun as it was firing,” she said.  “One of the guys is lying dead outside my gate.   (Times Live) 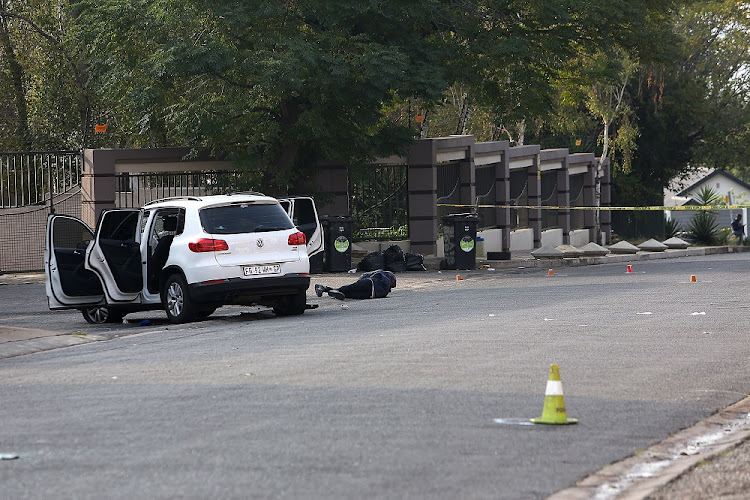 “It is not something that you want to see with your five-year-old son. He was with me when we saw the shooting. He is fine and we talk about crime all the time – this is just the reality.”   Police spokesperson Captain Mavela Masondo said police sp tted five suspicious men travelling in a white Volkswagen Tiguan at around 5.15am.

“They kept observation. The suspects attempted to hijack a [Hyundai] Elantra and then the police intercepted. The suspects pointed firearms at the police and police opened fire at them,” said Masondo.  The suspects were chased and cornered near a Shell garage in the area. Masondo said one person was shot dead, two men were shot and wounded and two others were arrested.

Police recovered four unlicensed firearms, including a rifle and three pistols.  A man who lives in the area said he was still asleep when he heard five shots go off. “We heard the gunshots at around 5am this morning. There was a lull and another five shots afterwards,” he said.  Following the shootout, the body of a man covered by a silver space blanket lay a few metres in front of the man’s gate. Police forensics were taking fingerprints from the body.

The man said his son, who lives in Northcliff, drove past the house and informed him of the body outside his gate.   A few metres up the road, close to a Shell garage, two men lay handcuffed next to the white Volkswagen Tiguan, which police said had been hijacked recently in the same area.    One of the men’s shirts was torn and he had blood on his chest and face.   Officers later loaded the men into a white VW Golf GTI and left the scene.